Post Brothers, a multifamily property development company based in Philadelphia, owns the property and operates several more in the area and has made a point to set its properties apart with amazing outdoor facilities. As a result, large bodies of water at Presidential City, totaling 150,000 gallons, are heated year-round.

“The operational requirements of our outdoor pool club changed over the years,” says Sarina Rose, senior vice president of development for Post Brothers. “We realized that, although our residents and leasing staff appreciated the pools being filled all year long, they were not being utilized during the winter. The residents do, however, use the Jacuzzis. In an effort to save energy and maintain the pools at at just above freezing temps over the winter, we explored investing in a new pool heating system.” 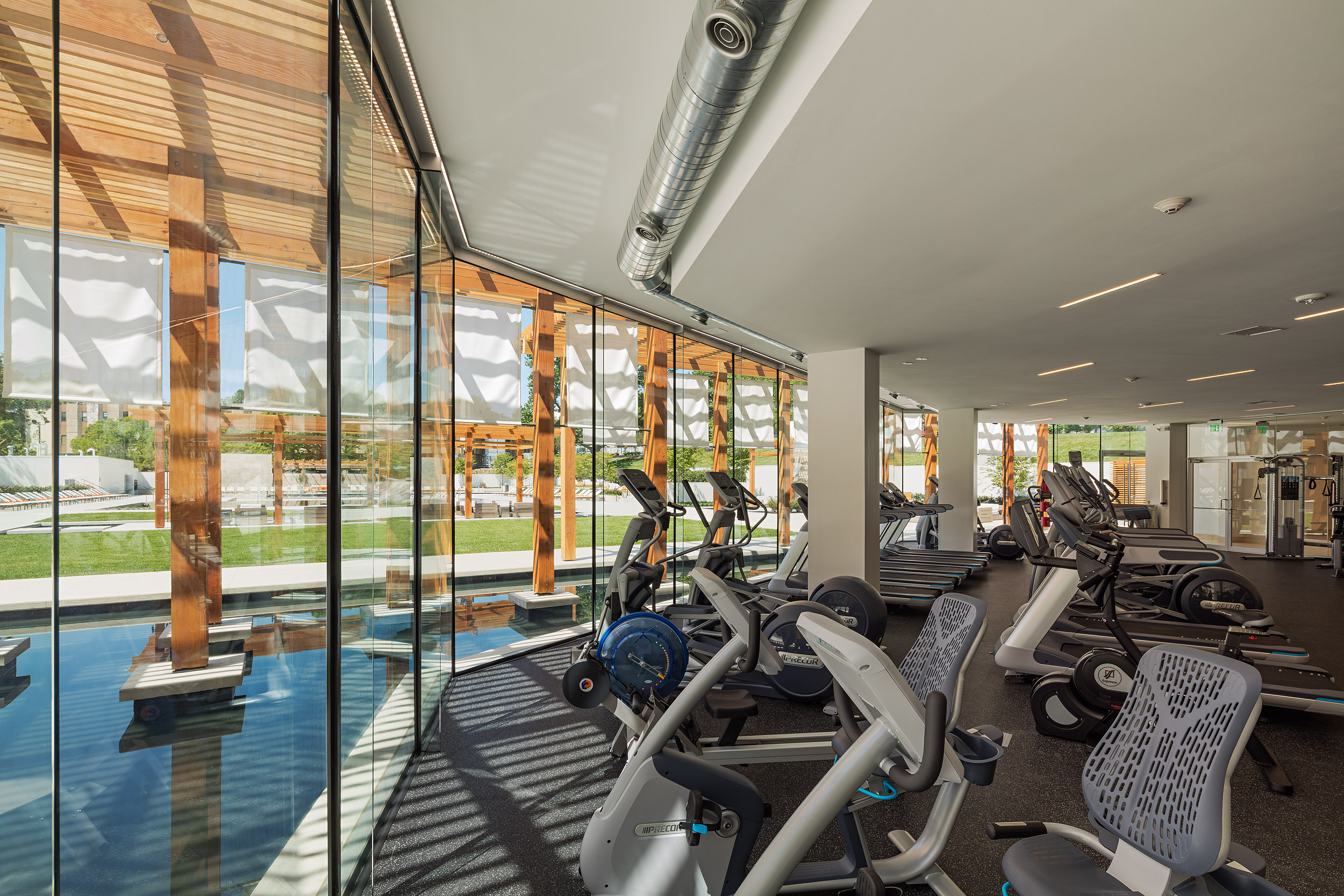 “Management at Presidential City called us mid-2020, explaining the changes that they wanted to make, and that the existing pool heaters were underperforming and consuming more natural gas than expected,” says Tom Soukup, owner of Patriot Pool Heating, Kirkwood, Pennsylvania. “We responded to the service call and found that all of the units, which had already been replaced at least once in seven years, were simply no longer up to the task.”

“We’ve conducted new and retrofit pool heating projects for retirement facilities, condo and apartment complexes, resorts, hotels and water parks,” Soukup adds. “The method we employ, utilizing stainless steel condensing boilers as opposed to dedicated pool heating units, has proven time and again to reduce maintenance, lower fuel bills and provide greatly improved comfort and system longevity. It’s a departure from the norm in the aquatics industry, but it works exceptionally well and we have a long list of clients who’ll attest to that.”

There’s no single key to successfully creating a pool heating system that will function for decades, but it definitely starts with design. Choosing equipment built for longevity is also critical, and eliminating contact between corrosive pool water and the heating element is of utmost importance.

“I believe that using high efficiency boilers is the future of the aquatics industry,” Soukup explains. “I think that the industry will push and pull for it; meaning that efficiency standards will continue to rise, mandating the use of high efficiency products, and customers are beginning to demand more robust, longer lasting solutions. Boilers are the answer in either case.”

Initially, Patriot was brought in while all bodies of water at Presidential City were maintained at a comfortable temperature during the winter. The new goal was to maintain the hot tubs at 102 degrees year-round, and for the swimming pools at 84 degrees in the summer and 40 degrees in the winter.

The six existing pool heaters ranged from 400 MBH to 1.2 MMBH, and had been failing at a rate of one every 18 months. Luckily there was some redundancy built into the system so the pools and spas remained at temperature, but maintenance costs were extraordinary.

“Management expected us to fix the existing pool heaters, but that wasn’t possible,” Soukup says. “The biggest issue was the lack of hydraulic separation. Beyond that, only one of the six pool heaters was a condensing model. Yet, in the winter, 40-degree water was coming in. The heat exchangers were constantly condensing when they weren’t designed to. Additionally, the pool’s salt content was destroying the copper heat exchangers at an alarming rate. We temporarily fixed enough of the issue to buy some time.”

The Post Brothers’ No. 1 request was that the pools remain at temperature, without fail. It was imperative that tenants not be inconvenienced. Once given the nod to proceed with a replacement, Soukup began the design process. 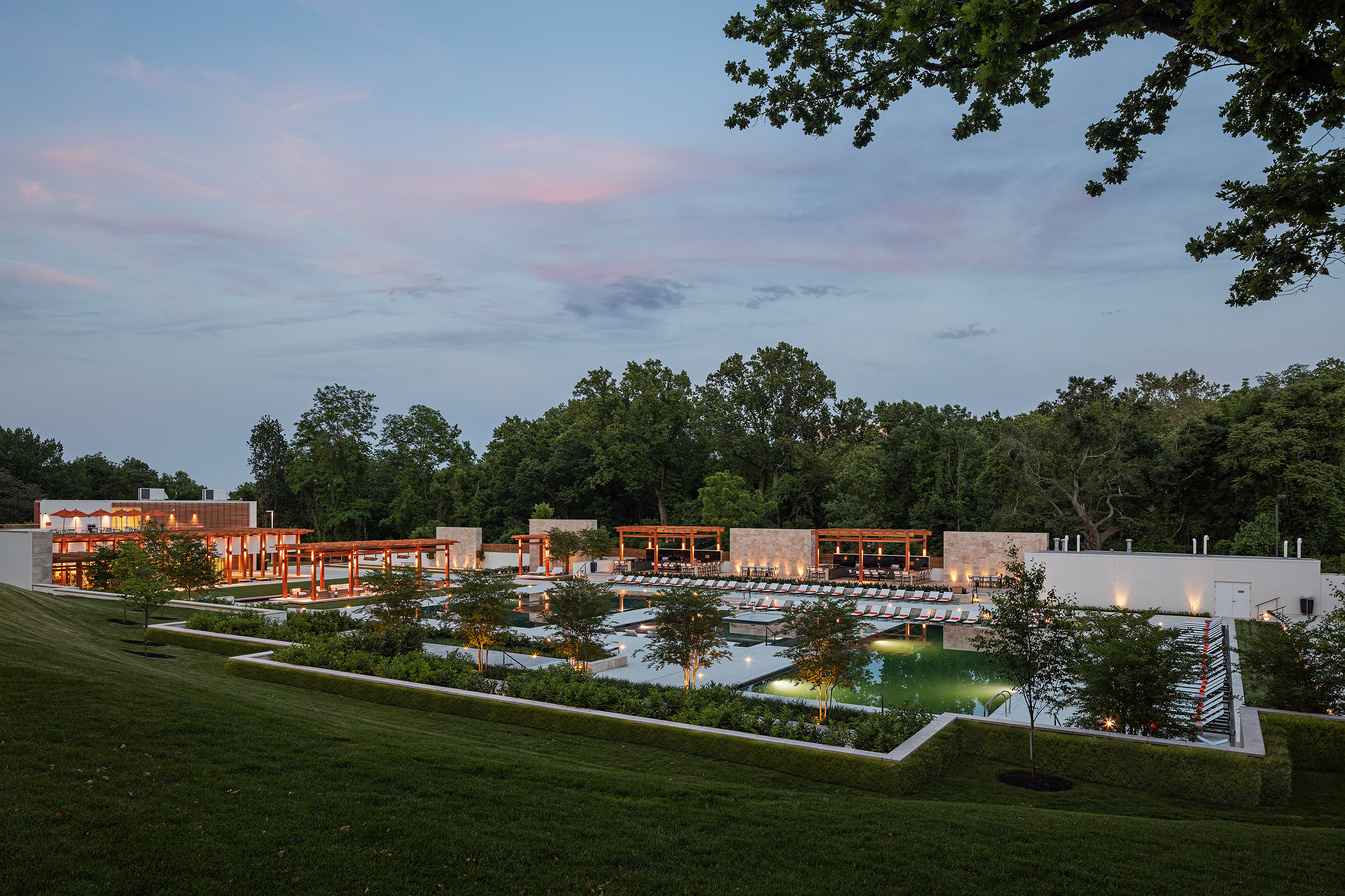 “We rely on our manufacturer’s representatives for pre-sales support when needed,” Soukup explains. “We purchase our boilers and various system components from Dave Raabe at ROI Marketing. He has always provided high levels of support on the front end. With his help, and our familiarity with these systems, we need minimal post-support. An ounce of prevention is worth a pound of cure.”

Before starting the design, Post Brothers insisted that the most important results of the replacement were reliability, redundancy and efficiency.

To begin the design phase, two separate calculations were needed, one for the hot tubs and one for the pools. Considerations included the volume of the water, the surface area of the water, ambient air temperature and wind factor. Combined with the desired setpoint of the hot tubs and the pools, these figures provide a maximum heat loss. Because Patriot planned to use multiple modulating Alpine boilers made by U.S. Boiler Co, the vast difference between the heat load in summer and winter wasn’t a concern.

After deducting the efficiency loss across the 10 titanium shell-and-tube heat exchangers, Soukup found that he could provide the heat needed with four, 800 MBH Alpine condensing boilers. Combined, the boilers have an input of 3.2 MMBH, but because each boiler has 10 stages of input, the system can fire as low as 80,000 BTUH in situations where the call for heat is minimal. Unlike the existing pool heaters, which operated independently of one another and were dedicated to specific bodies of water, the four boilers operate together to produce heat. The bank of heat exchangers distributes heat from the boiler loop to the pools for much greater redundancy.

“The new design is inherently more efficient and more dependable than the original,” Soukup explains. “The existing pool heaters were noncondensing models and had copper heat exchangers which were in direct contact with pool water. Those are negative attributes except in the respect that they provide a lower upfront cost.”

“Patriot provided a design along with a cost analysis including energy savings and lower maintenance costs,” Rose adds. “We realized that the payback for the new system would be less than four years. It became obvious that it was the right time for us to make this investment.”

Patriot replaced the entire pool heating system over two weeks in the spring of 2021.

The project was complicated by the fact that pools and spas had to remain at setpoint temperature throughout the project. But the large size of the pump room meant that the old units could remain in service while the new system was being assembled. We had also prefabricated much of the boiler system at our shop. Even better, the hot weather alone kept the pools above setpoint, though the hot tubs still needed heat. 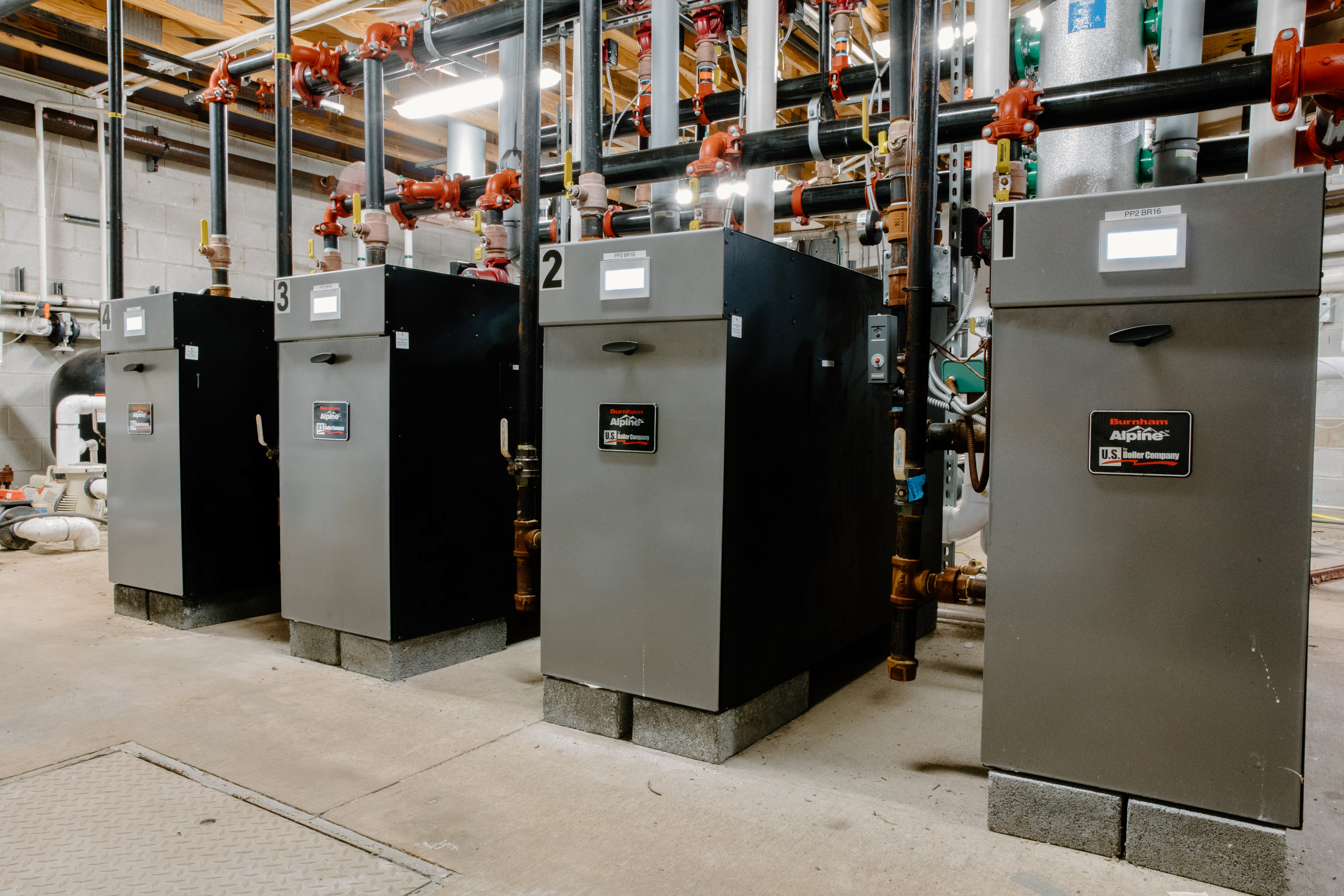 The four boilers are piped into a single large primary loop, delivering 140-degree water to the secondary loop, leading to the 10 360,000-BTUH titanium heat exchangers. The larger bodies of water require more heat than a single exchanger can provide, so several of the heat exchangers are on a manifold to serve these loads.

“We use both U.S. Boiler’s K2 and Alpine boilers for their reliability and ease of installation and service,” Soukup says. “When we need a great deal of capacity, we generally install the Alpine. It’s available in models from 80 to 800 MBH, so we can serve very large jobs without using a dozen units.”

The beauty of the common boiler system is that it can respond to any call for heat very accurately, whether a single hot tub is calling for heat or if all bodies of water call at once. Once the lead boiler reaches 50 percent firing rate, the second boiler will fire at low input and increase its capacity as needed, and so on. The Alpine’s staging controls rotate the “lead” boiler on a regular basis, ensuring that runtime hours are balanced across all the units. Unlike the original system, this simplifies service and extends boiler service life.

“In this system, the titanium heat exchanger takes the abuse from condensate, salt or chlorine, not the heating appliance,” Soukup explains. “Being titanium, they withstand the harsh environment very well. In the unlikely event of a failure, we stock them, so we can be responsive same-day. There’s quite literally no more effective means of heating pool water.”

The system provides pinpoint accuracy in addition to longevity. Temperature in all of the pools and spas are maintained within one degree of setpoint, regardless of outdoor conditions.

“The maintenance and facility team are very happy with the new system,” Rose says. “There was a considerable amount of apprehension about doing the work and taking some portion of the facility out of service, but Patriot made sure that the pools were always open and at temperature throughout the project.”

For years to come

“Reliability, accuracy and longevity were very important,” Soukup adds. “Another big consideration was the fuel bill. The previous year’s gas bill for the pool area was $140,000, and the projected cost to operate the new system for a full year is $80,000. A 43 percent savings is nothing to scoff at, especially when there are a lot of zeroes involved.”

“Patriot was really great to work with,” Rose says. “They made sure that we truly understood what we were getting and presented the pricing, equipment cut sheets and energy/payback schedule in a way that the entire team could understand. They stuck to the schedule and the installation process was smoother than I could have imagined. The best part of working with Patriot is that their warrantees beat their competitors by years. It allows us to have a much more predictable experience long term without surprise costs.”

The new system has been running for eight months now, and Patriot Pool Heating hasn’t received a single call. Soukup is already in the process of designing a second, much larger system for the same real estate group.

“Presidential City features 5,000 square feet of water surface,” Soukup says. “The next one will be twice that size. If we weren’t so confident in the systems we create, I’d have trouble sleeping at night. That’s simply not the case. We trust the math, trust our system components and trust our ability to install them correctly.”

Rich Zalepa is service manager for Patriot Pool Heating Co., Kirkwood, Pennsylvania. He has 15 years in the plumbing/HVAC industry and a passion for hydronic heating systems.

Contractors & Installers Hydronic Piping Systems Hydronics/Radiant Projects Residential
You must login or register in order to post a comment.