The challenges presented when gas gets in your system.

Hydronic heating and cooling systems that allow air or other gases to enter them do not function well. They become less efficient and unreliable, leading to complaints from occupants, building managers — and those who pay the repair and utility bills.

Examples of the damage done to the circulating pump components at a manufacturing site include shaft keyways that were opened up, an impeller cracked at the hub, and mechanical seals coated with corrosion byproducts.

The proof that entrained air was the cause is shown by a plastic bottle showing an opaque liquid just drawn out of the system; the opacity caused by air bubbles (Figure 1). A minute later, they float to the surface and the liquid is clear. 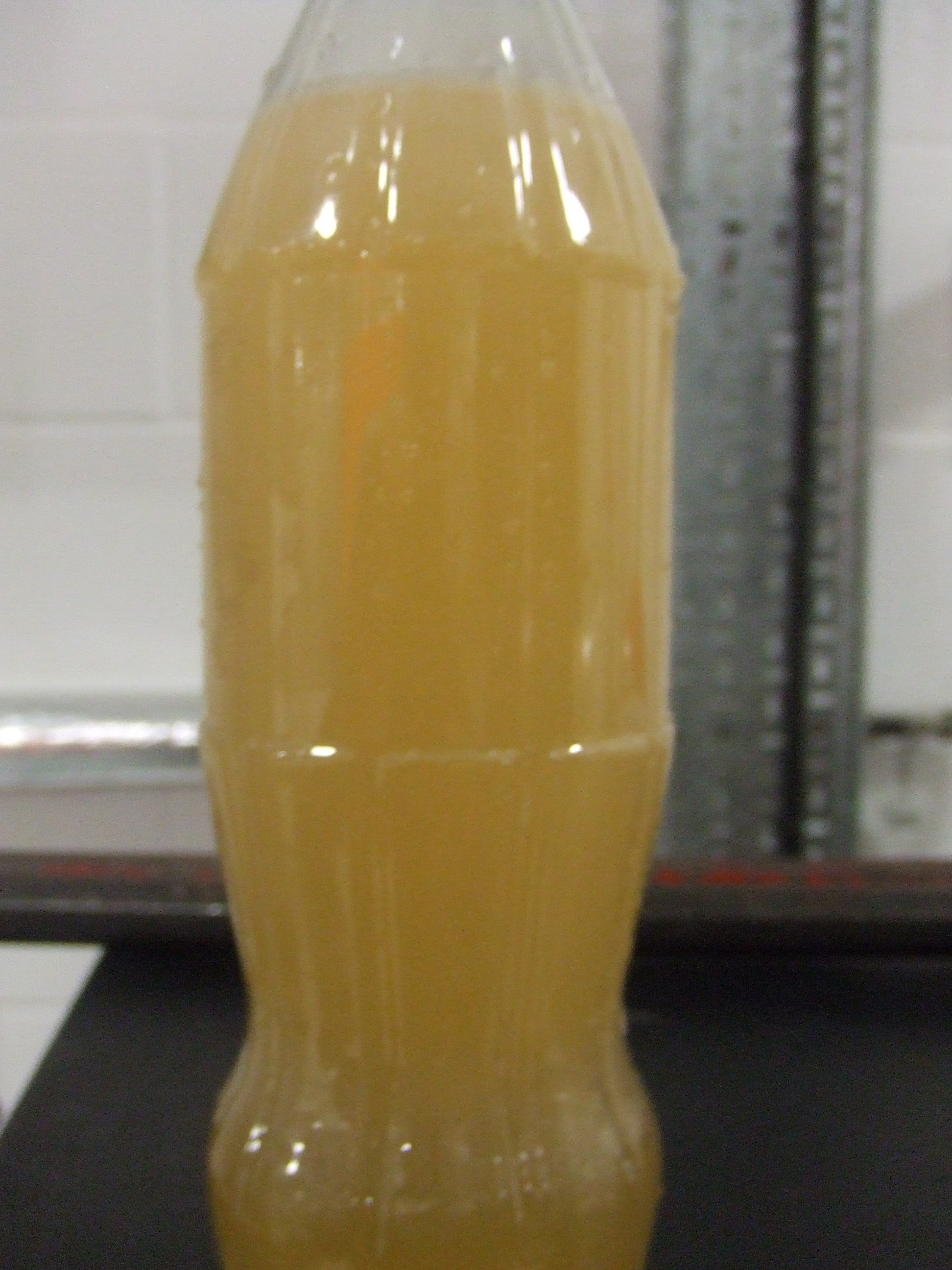 The Physics of Gas/Air Solubility in Water/Liquids

The solubility of gas in liquids follows the law of physics set out by William Henry, a Mancunian (that is, from Manchester in the UK) in 1803. He described experiments on the quantity of gases absorbed by water at different temperatures and under other pressures.

His findings are the foundations of Henry’s Law, where:

x = solubility of air in water (percentage by volume)

A misnomer, H increases in value as the temperature rises to a peak approaching 200 F, causing the solubility to decline.

Combining the H Constant curve with the solubility equation results in a map (Figure 2) showing lines of solubility percentage of air by volume in water versus temperature and pressure. This tells us that air can come in and out of solution, depending on its location in the hydronic circuit. It may be in solution at the lowest part of the circuit, where pressure is high, but come out of solution, as free air, at the top, where pressure is lower. 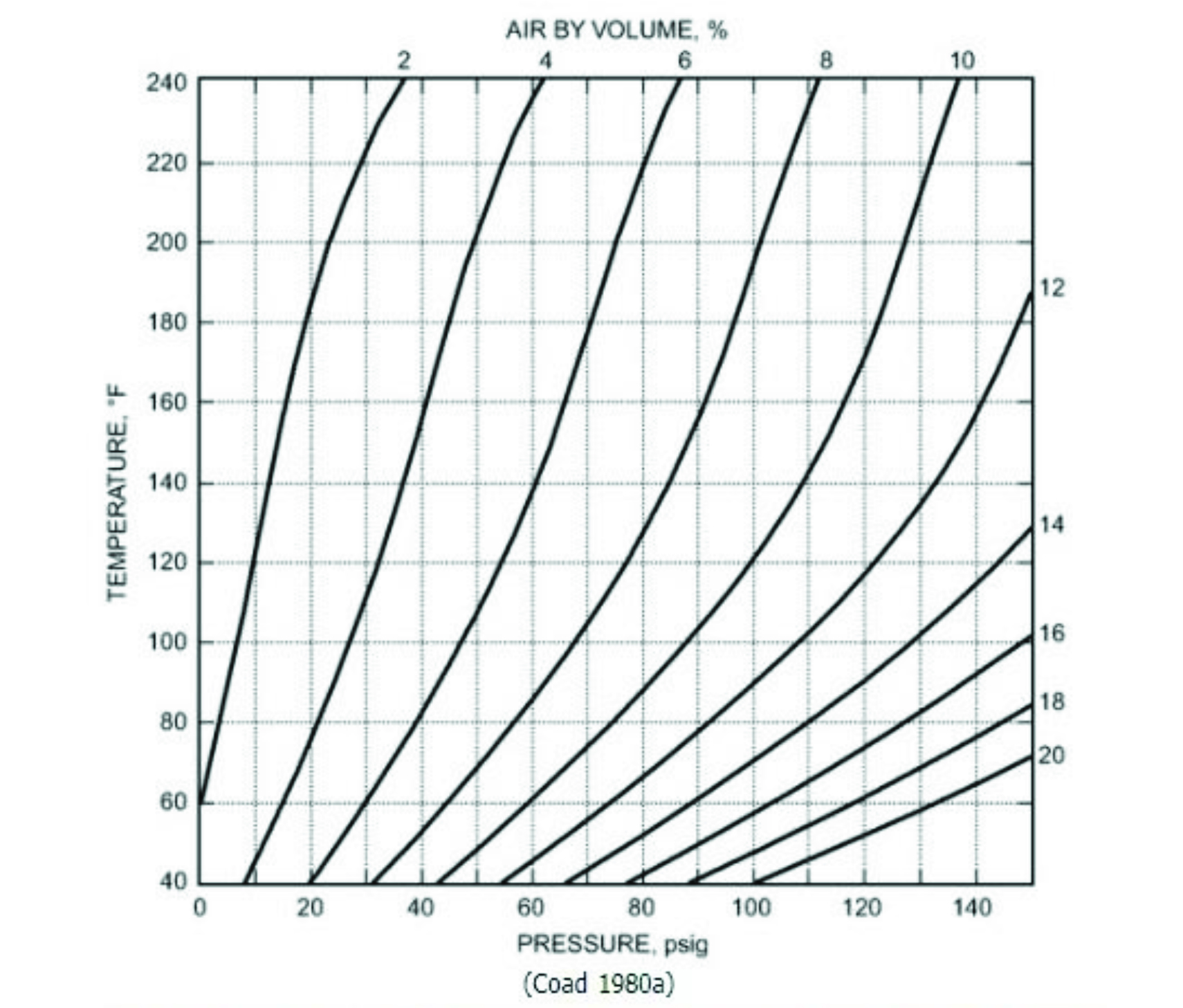 Take note of the properties in these areas of the chart:

• Bottom right: high solubility when cold and at

• Top right: half as soluble as bottom right when at

• Top left: low solubility when hot and at low pressure;

However, conventional air separation cannot remove gas that is in solution.

How and Why Does Gas Get into Liquid?

Oxygen and nitrogen enter the hydronic system when first filled with cold water from the town mains. The system contains a significant level of these dissolved gases, released from solution when the water is heated up.

Subsequently, top-ups will add gases back in. These are required when filters are taken out for cleaning or equipment blow-downs or valve stems, gaskets and seals start leaking.

Another potential cause of gas entering the system is if the expansion tank is connected to the hydronic circuit on the discharge side of the main distribution pump. When located here, the pressure will stay the same, whether the pump is on or off. Instead, the pressure changes on the inlet, low-pressure side of the pump, depending on whether the pump is operating or not.

And if the static head is low, such as in a penthouse mechanical room, and the pump head is high enough, the hydronic circuit at this point will be in a vacuum.

This will lead to air being sucked into the system.

Hence, it is not recommended to install the expansion vessel on the discharge of the circulating pump. Connect it to the inlet side of the pump, always.

• Corrosion, caused by oxygen reacting with steel pipe, produces iron oxides, which cause premature failure to plant, choke filters and cause scale buildup. Boiler heat exchangers (cast iron), steel radiators, pumps, valves and many other items are all vulnerable.

• Nitrogen, which is relatively inert, remains in place. When out of solution, it obstructs flow, preventing correct heat transfer. This can be especially a problem at the top of the system, for reasons explained previously.

• A noisy hydronic system with a gurgling sound coming from it has an entrained gas problem.

How to Remove Gas from a System

1. Air purger. This type uses the buoyancy of gas in a liquid, combined with an internal molding or fabrication, to direct the gassy water into the bulge at its top. This traps the air and allows it to be safely removed using an air release valve or eliminator from the air vent point.

2. Vortex air separator. This type uses centrifugal force to separate the gas from the water, similar to a centrifuge. Its inlet and outlet connections enter at a tangent to the outer edge of the unit, establishing a swirl. The lighter gas gathers in the middle and floats up to be released at the vent point. (see Figure 3). 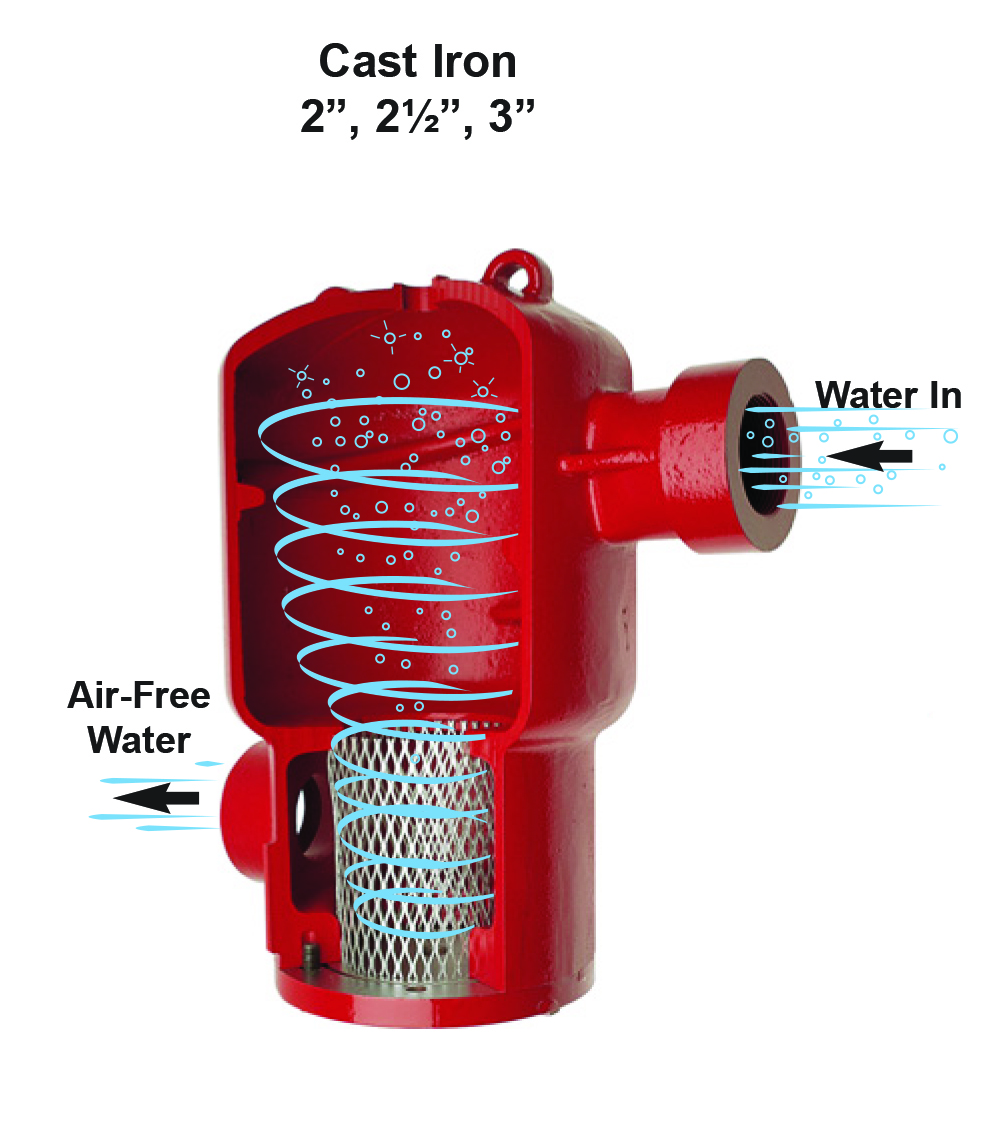 Note that the inlet/outlet connections are not co-axial. The water enters on the upside of the vortex air separator and travels downward, helping the air separation process before exiting from the lower side of the unit. A little care is required by the CAD designer when setting out the pipe runs to allow for this layout.

An optional stainless-steel mesh (1/4-inch x 3/4-inch) startup strainer can be fitted to the vortex air separator to filter out larger corrosion solids. A third connection is added for cleaning out the strainer. This action must be done after the first 24 hours of operation.

3. Coalescing air and dirt separators. This type works by slowing down the velocity of water before it confronts an array of fine stainless-steel mesh, as in the case of the Armstrong DAS model (Figure 4). Micro-bubbles of air are adsorbed (not absorbed) by the mesh and coalesce with each other. As they grow larger, they gain buoyancy and float to the top of the air separator, where they can be released at the vent point.

Meanwhile, any dirt particles are allowed by the low velocity to drop down into a nonturbulent zone, where they can settle at the bottom. A blow-down valve, located on the underside, is opened to remove the dirt as part of the routine maintenance schedule.

This type requires a healthy clearance above and especially below the entry connections. The flange at the bottom allows the coalescing tubes to be removed for cleaning. These clearance requirements occasionally will present a challenge to the system designer.

Place air separators at the hottest part of the heating system, soon after the water leaves the boilers. The gas solubility is least at this moment, so the free gas is available to remove.

Note well that chilled water will always include much more dissolved gas than hot water. This gas will be in solution at higher pressure at the bottom of the system or downstream of the pump discharge — but come out of solution at the top of the system, at low pressure.

In cooling systems, place them at the top of the system (see Figure 5). 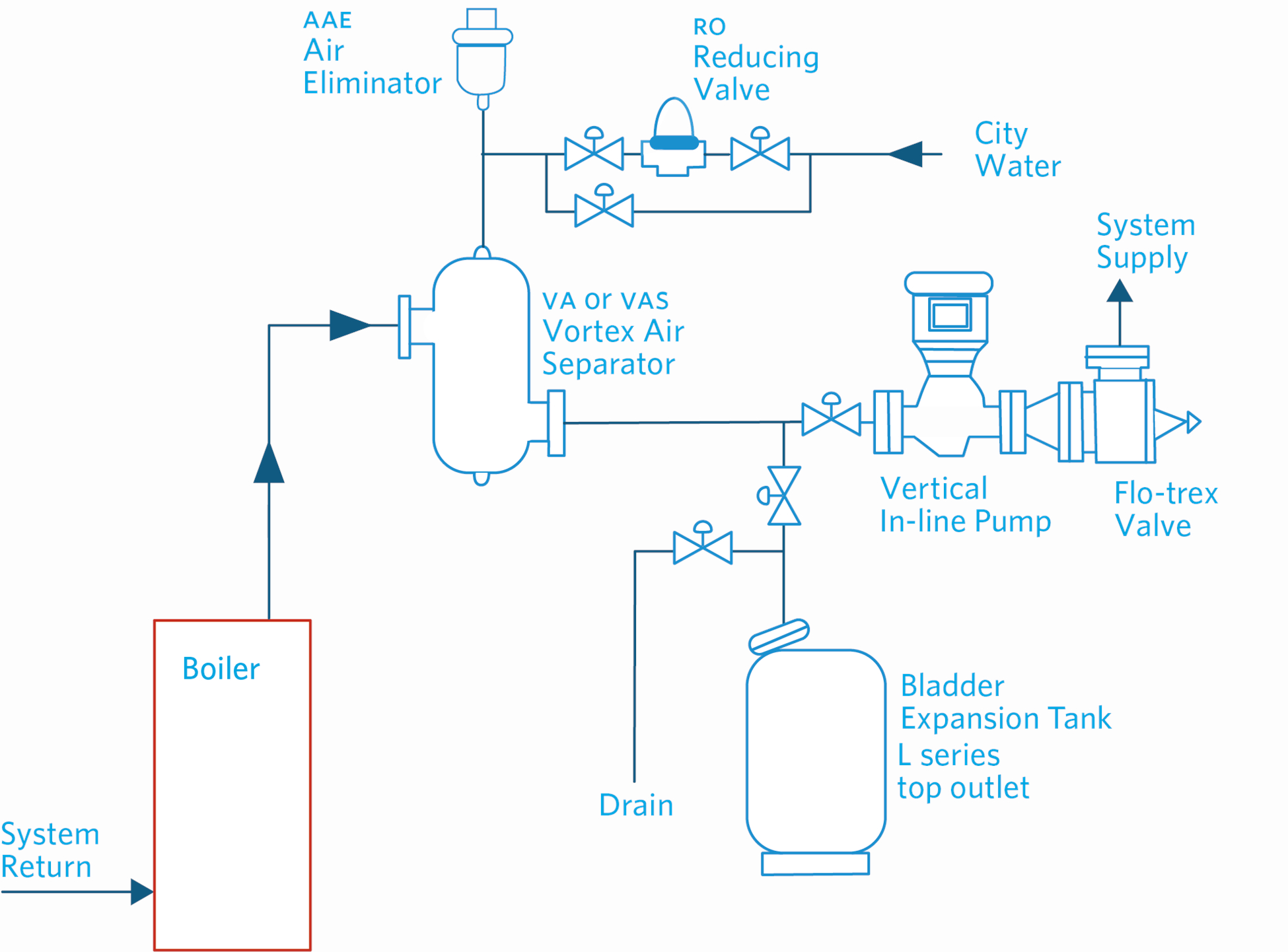 Several other essential items are required to ensure a reliable, low-maintenance hydronic system:

• Air eliminators. These are essential to release the trapped air. Note that in the recommended installation diagram, the location of the eliminator allows any free air in the city water that has entered to leave the system straight away.

They must be robust enough to work years with minimal maintenance or replacement, such as the unit pictured in Figure 6. 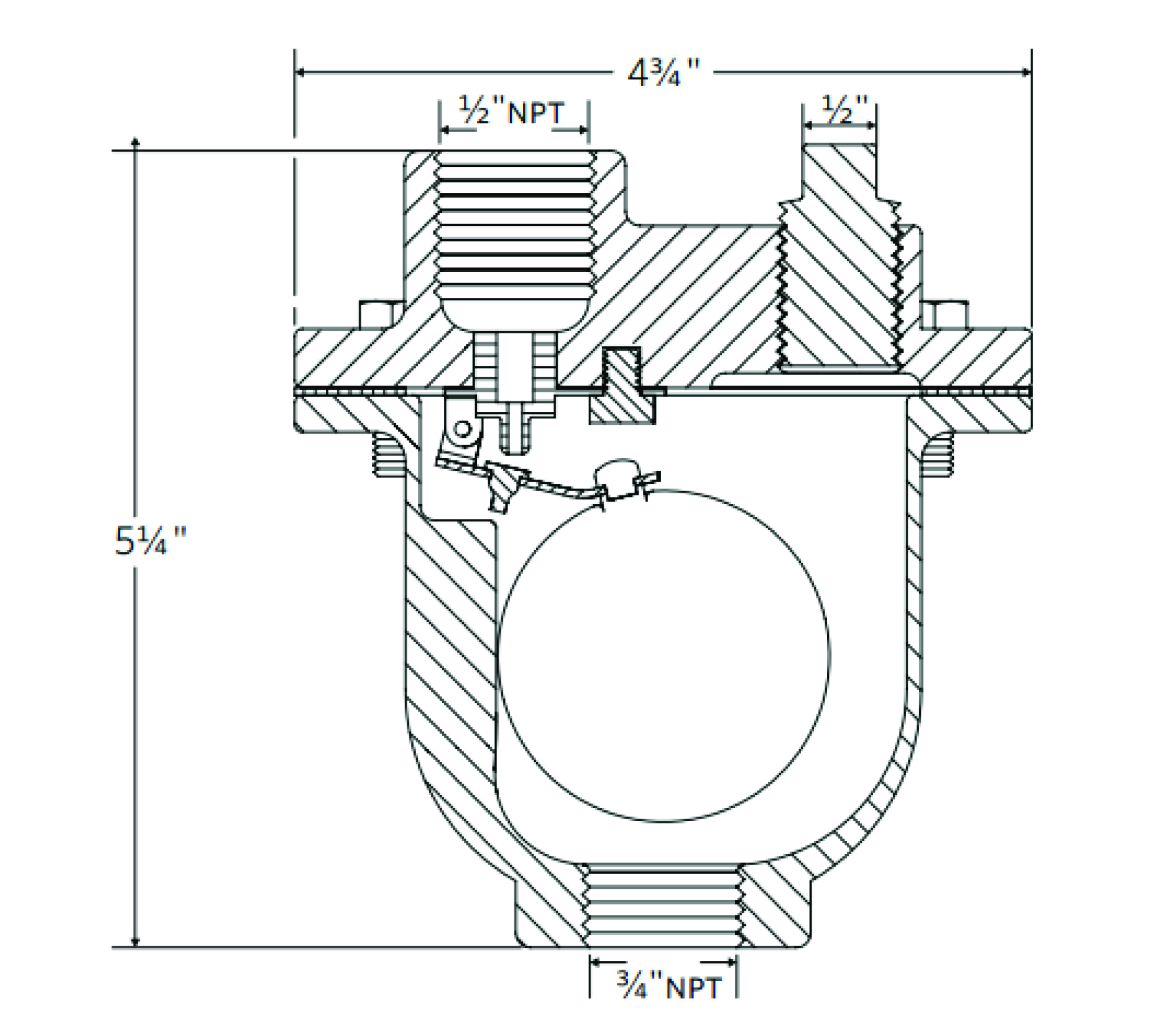 • Relief valves. These safeguard the hydronic system by releasing water when system pressure becomes excessive. The most sensitive component is often the heat exchanger in the boiler. The relief valve prevents an expensive and dangerous event from happening.

• Pressure-reducing valves. These are fitted to the city main makeup water supply into the hydronic system. They reduce the pressure to a suitable value, enough to prevent air from getting sucked in but not too high to jeopardize the safety or operation of the plant.

Engineers & Specifiers Engineering Hydronic Piping Systems Hydronics/Radiant
You must login or register in order to post a comment.