Back in October 2020, Cory Powers wrote Part 1 of this article, introducing myself, and my Master’s capstone project focusing on one of the hottest topics in the plumbing industry — Legionella (https://bit.ly/3s8ogD0). Now, more than a year later, I am ready to provide the concluding Part 2, showing the analysis and results of my study titled “Triple Bottom Line (TBL) Analysis of Legionella Mitigation in Domestic Hot Water (DHW).”

The triple bottom line is a framework that takes into account and combines the three pillars of a company, product or design — its social, sustainable and economic aspects. For designs regarding Legionella, the primary social impact is safety, specifically safety of the building occupants. Therefore, the study focused on safety, sustainability and cost of two different Legionella mitigation systems — with the goal of being able to recommend one for a typical project in the United States.

My analysis focused on the two mitigation methods of temperature control and continual free chlorine disinfection. Of course, there are many other Legionella mitigation strategies in the realm of domestic plumbing design — such as copper-silver ionization, UV irradiation, etc.

Temperature control and chlorine disinfection were selected because, as was found through a preliminary literary study, they are the most widely understood and popular Legionella mitigation methods used today — not necessarily because they are the best. It was deemed that comparing these two methods would be most beneficial and impactful to owner decision-making, and provide a sufficient baseline to compare other systems to in the future.

The study used a hypothetical case study approach as the studied systems were never intended to be constructed, though they were designed to a real project. However, changes and assumptions were made to allow the project to act as a base model of a typical Legionella mitigation project in the United States — or as close as one can get because when is a project ever “typical”? The reference project was a small, one-story immediate care outpatient facility with the fixtures and demand shown in Figure 1. 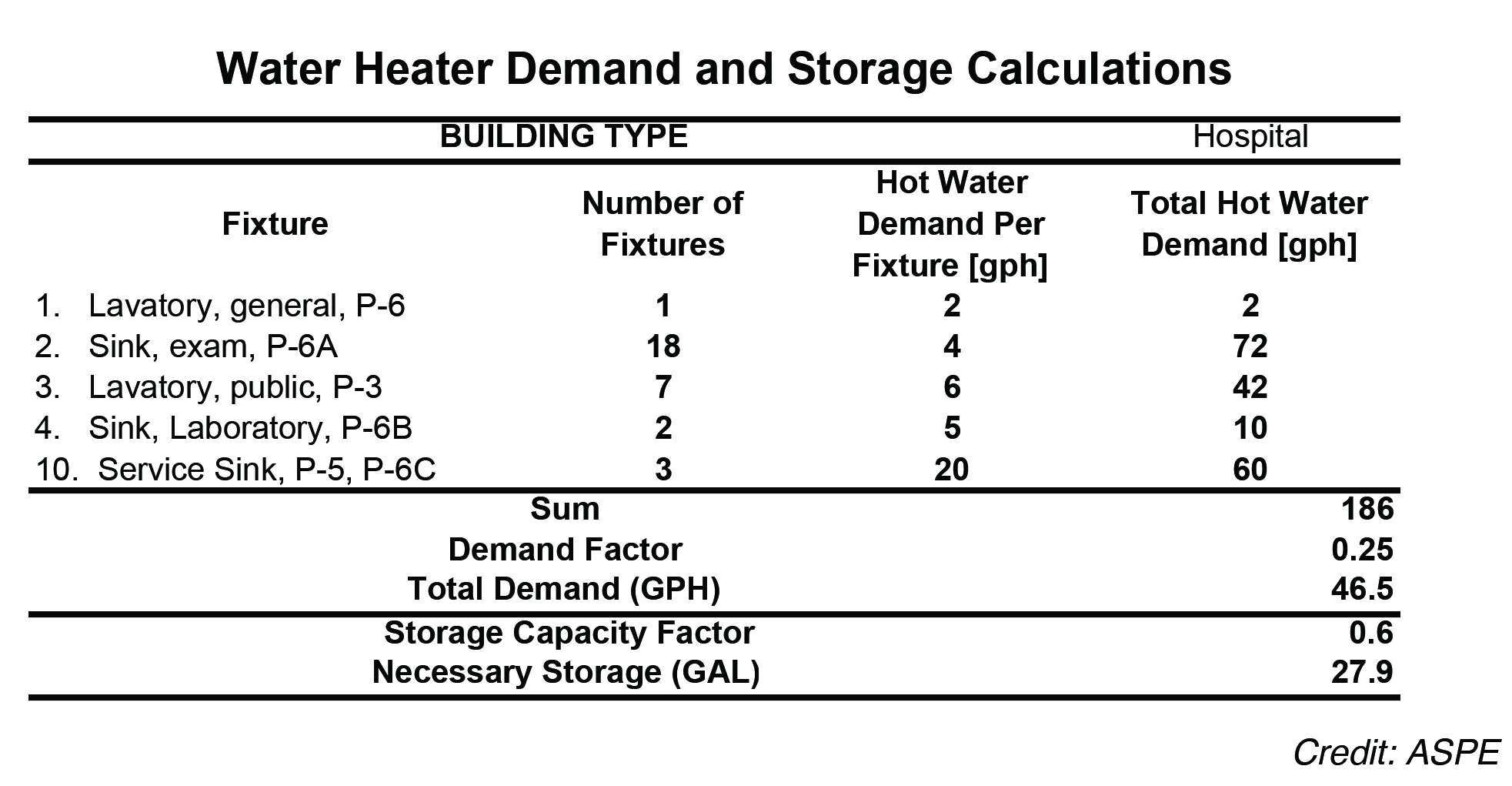 To begin the design process, there were considerations necessary to be present in both systems, including: preventive vs. curative control, temperature maintenance and dead leg minimization.

When a design uses preventive control, it means that the intended use of the system is to prevent Legionella as opposed to curative control’s goal of curing, or purging, the system of already present bacteria. Typical curative strategies related to the studied systems would have included heat shocking (elevating temperatures above 140 F for a specified time) and shock chlorination (elevating residual to an extreme concentration for a specified time), respectfully.

Both systems also included domestic hot water recirculation (DHWR) as the primary method of temperature maintenance. This is by-far the most widely used temperature maintenance strategy in the United States as it maintains flow throughout the system and is most often more cost-effective than other strategies, such as heat trace.

Finally, both systems were designed with minimal dead legs. Through my research, I found it is often misunderstood that the only concerning dead legs are the ones defined by the codes — usually a developed length of pipe away from a hot water source. Instead, one should better define a dead leg as any point in the plumbing system where the water becomes stagnant, or even where there is simply low flow.

This clarification becomes important when considering small pipe crevices or fitting joints, which can create smaller dead legs that are less noticeable but still act as breeding grounds for Legionella. Therefore, it is beneficial to maintain pipe velocities close to 4.5 feet/second when possible — high enough to better circulate the water but low enough to minimize pipe degradation.

In addition to their similarities, it is also important to understand the unique factors in each system separately.

Temperature control system design requires special consideration to the factors of operating temperatures, the temperature control point and scalding potential. The relationship between DHW temperature and the state of Legionella is fairly well understood in the industry today, with 140 F most often being the standard for continual mitigation. It is the standard because at 140 F, the Legionella bacteria die within 32 minutes, which is a short enough time frame to be handled within the system.

While this point may be widely accepted, the designer still needs to evaluate how this standard should be applied by determining the appropriate temperature control point. Some take it to be as easy as setting the water heater at
140 F and not accounting for any heat loss within the system. Others believe it to be sufficient to maintain 140 F only to the most distal fixture and not necessary to sustain in the DHWR leading back to the water heater.

However, for assured preventive control in a health-care setting, my research found it to be appropriate to recommend that no point in the system (even downstream of the most the most distal fixture) reaches below 140 F.

For this system, the final factor to make note of is any water above 120 F has scalding, or burn, potential for occupants, especially immunosuppressed individuals. Hence, thermostatic mixing valves (TMVs) are typically implemented in various configurations to minimize scalding.

Chlorine disinfection system design requires special consideration to the factors of chlorine application, system components and residual levels. The most popular application method is to use aqueous sodium hypochlorite solution, also known as liquid chlorine or chlorine bleach, as opposed to using chlorine gas or dry calcium hypochlorite (dry chlorine) due to safety and feasibility.

In terms of residual levels, it is challenging to determine the concentration of chlorine to use as there are different fields of thought. On the one hand, too much chlorine causes poor taste and odor and exposes occupants to more disinfection byproducts than necessary. On the other hand, too little chlorine could allow room for Legionella to become present.

To balance these concerns, and to attempt to match the temperature control system’s level of risk, the analyzed system had a continual chlorine concentration of 2 parts/million (ppm), or 2 mg/L. In a more tangible application, water quality tests usually help to determine an appropriate concentration.

Using these aspects, the systems were designed and drawn to allow for proper visualization and cost estimation. The temperature control design consisted of a gas-fired water heater, circulation pump and piping routed in a four-loop configuration — each with its own automatic balancing valve controlled by the loop temperatures.

Piping was sized to accommodate pressure loss and to maintain water velocities at about 4.5 feet/second. The temperature setpoint was 147 F to keep the entire system at or above 140 F and each fixture had a point-of-use TMV to mitigate scalding.

The chlorine disinfection design primarily consisted of a five-gallon drum to hold 12.5 percent sodium hypochlorite solution, injection line, gas-fired water heater, circulation pump and piping routed in a single loop configuration. The temperature setpoint was at the typical standard of 120 F and there was no need for the use of TMVs.

In terms of design, the temperature control system required a water heater with a greater capacity to accommodate the higher temperature usage, as well as more balancing and mixing valves. Due to the use of chlorine, the disinfection system required more architectural space for the added equipment and emergency eye wash, and there were more ventilation requirements, resulting in an added fan.

The two systems were found to be comparable in terms of safety; however, it was difficult to quantify as I did not have time to perform a quantitative risk analysis. In general terms, the systems align in that how temperature control has scalding potential, chlorine disinfection has the potential to be over- or under-concentrated. These safety concerns arise when the systems either do not function properly or are not maintained properly, which is unfortunately too often the case for both systems.

When analyzing cost, the temperature control system had a life cycle construction cost of $70,053, including material replacement for a 50-year lifespan as shown in Figure 2. 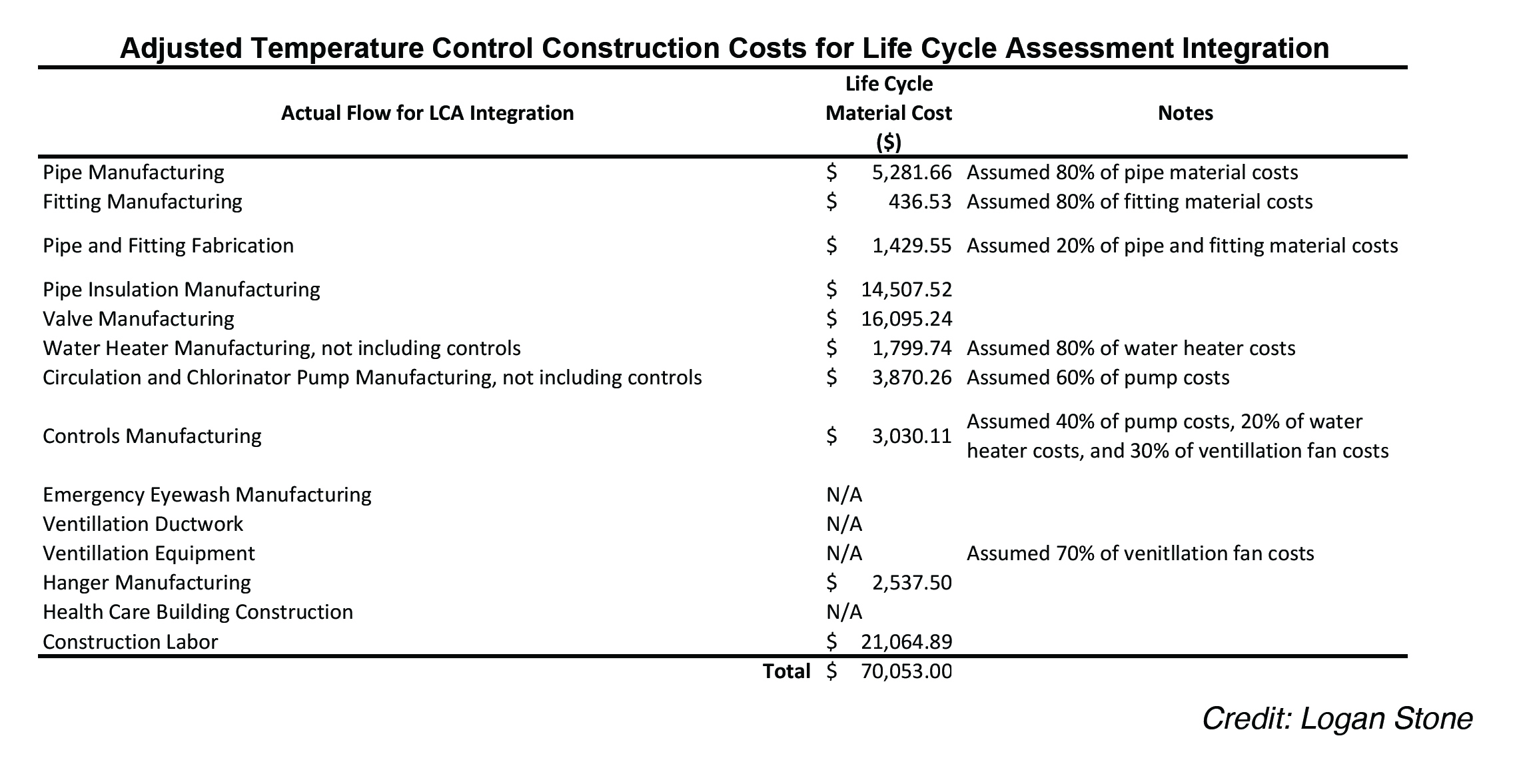 The net profit value (NPV) was then derived by incorporating this data into a cash flow diagram for a 50-year life cycle. It was concluded that the temperature control system had an NPV of $90,111; about 42.3 percent of which was dedicated to its upfront construction costs and about 48.9 percent was dedicated to its annual operational costs (note that percentages do not add to 100 percent due to rounding in the NPV calculation).

Then the same process was used to analyze the chlorine disinfection system, which had a life cycle construction cost of $61,659 as shown in Figure 4. 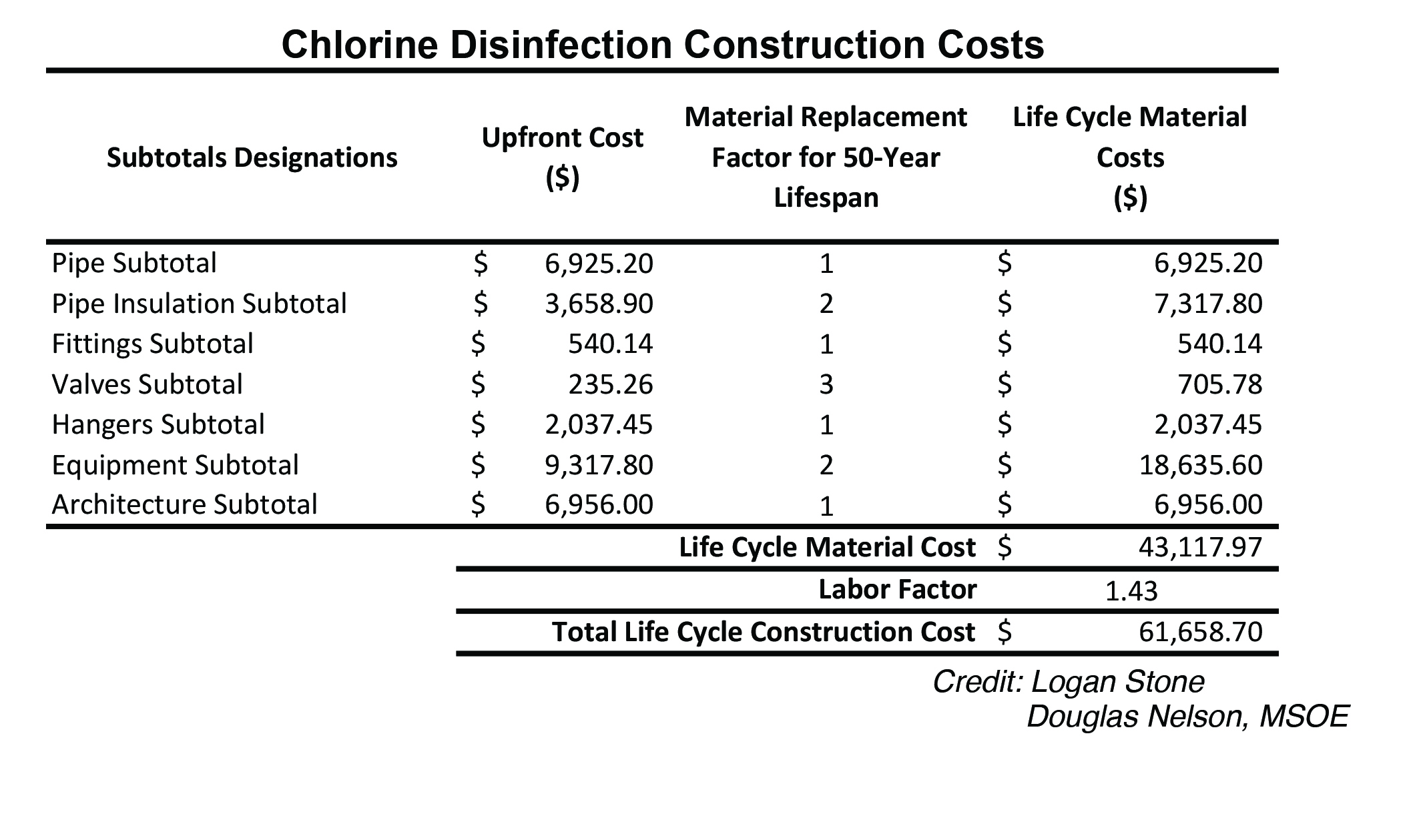 Again, cost of the system was broken out for the life cycle assessment calculation as shown in Figure 5, and then the annual usage costs were calculated.

The NPV was again derived using the previous data. It was concluded that the chlorine disinfection system had an NPV of $72,686; about 58.4 percent of which was dedicated to its upfront construction costs and about 34.7 percent was dedicated to its annual operational costs.

Overall, the hypothetical case study found that choosing the chlorine disinfection system would save the owner $17,426 over the project’s life cycle when considering all the necessary assumptions. This results in an approximate 19.34 percent decrease in life cycle NPV costs over the assumed 50-year life span.

Finally, the cost data was used to analyze and compare the environmental impacts of both systems based on the 50-year life cycle. Carnegie Mellon’s interpretation method helped immensely as it takes the broken down costs and converts them into environmental impacts, which can be easily compared. In Figure 6, the chlorine disinfection impacts are given as a percentage of the temperature control impacts and the horizontal axis portrays the life cycle assessment impact indicators.

It was concluded from the graph that chlorine disinfection also provides a 40 to 65 percent decrease in the negative environmental impacts compared to temperature control, depending on the environmental impact in question. This difference is primarily a result of the extra electricity and natural gas usage in the temperature control system, which is more impactful than the use of chlorine, including the effects of disinfection byproducts.

Another general finding was the recurring energy usage has the highest impact on life cycle cost and negative environmental impact.

Based on the triple bottom line results of this study, chlorine disinfection should be the recommended system for a typical project in the United States as it is similar in safety risks, more cost-effective over the project life cycle and less environmentally impactful. However, there were assumptions and limitations within the study that had an impact on the results, meaning both systems should still be analyzed on a project-by-project basis.

Therefore, rather than viewing this conclusion as a final, end-all solution to Legionella in the United States, the study should be viewed more generally as a successful introduction of an in-depth decision-making tool for Legionella mitigation design.

Logan Stone is a mechanical staff member at HGA Architects and Engineers office in Milwaukee. HGA is a nationally recognized health-care design firm with additional practices in energy and infrastructure, corporate, arts and higher education. Stone is an engineer-in-training and is an associate member of the American Society of Plumbing Engineers. He can be reached at lstone@hga.com.

Engineers & Specifiers Engineering Legionella Legionnaires' Disease Plumbing
You must login or register in order to post a comment.