As of July, spending in North America was up 16 percent from a year earlier. In the United States alone, spending was up 18.7 percent.

This year has been a follow-up to the global slowdown and economic recession brought about in 2020 by the onset of the COVID-19 pandemic. And while economic growth and industrial project activity are accelerating, headwinds remain as a new COVID variant is becoming more prevalent.

Semiconductors are in short supply. Crude oil producers and refiners are becoming increasingly edgy about the future outlook for fuel demand in the near term because of a rise in COVID-19 cases. In the long term, they are concerned about the transition to green energy.

Still, project spending has been positive so far this year for most industries. Figure 1 shows spending for U.S. projects under construction by industry as of mid-August. 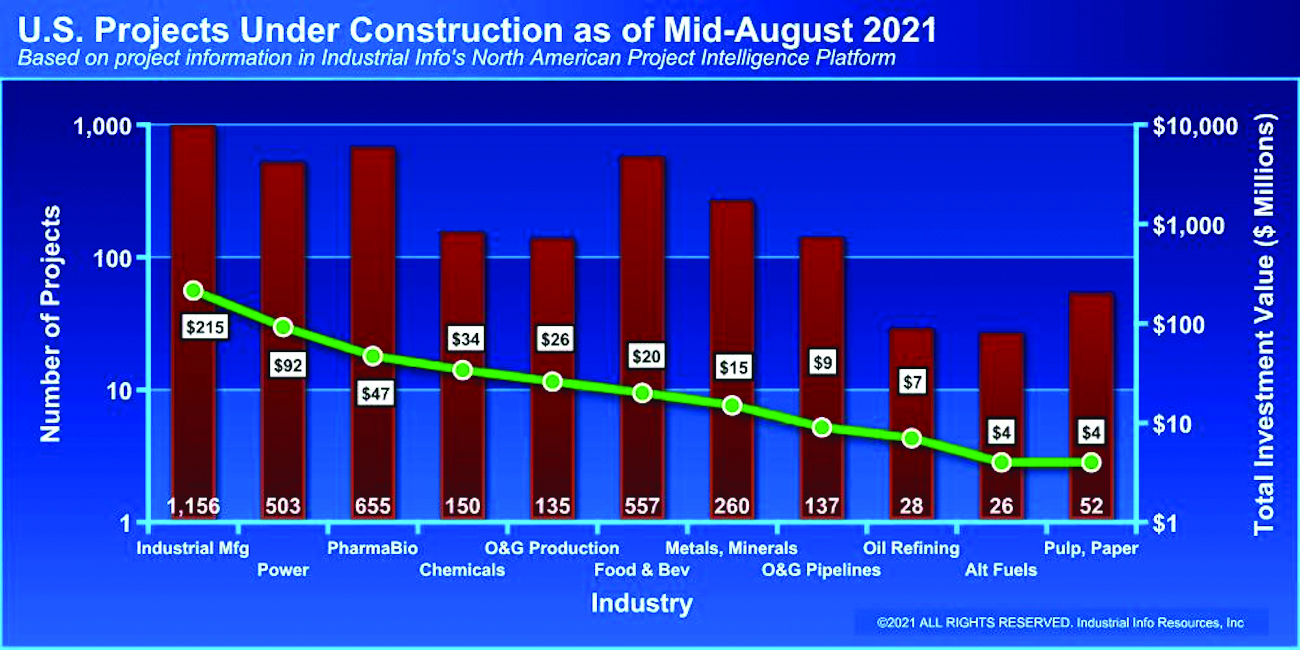 As of July, spending in North America was up 16 percent from a year earlier, marking the seventh month of consecutive year-over-year increases as the economy continued its climb from last year’s downturn, according to Industrial Info’s Project Spending Index. Increases were seen in all but three of the 12 industries tracked by Industrial Info.

In the United States alone, spending was up 18.7 percent. The spending index compares planned industrial project spending for the current year to the previous year in order to get a measure of growth or contraction in the industrial market (see Figure 2).

The oil and gas sector suffered at the onset of the pandemic with product demand drying up, causing several related projects to be placed on hold or canceled. However, Industrial Info has seen about 10 percent growth in spending from January in the upstream, midstream and downstream markets.

The oil and gas industry is looking for ways to become more sustainable. Much of the activity in these markets is for projects such as carbon capture and storage (CCS) technology and, in the downstream sector, renewable fuels.

A number of liquefied natural gas (LNG) production trains came online last year, although no new construction was started in the United States. U.S. LNG exports took a dive last year but are expected to rise by more than 3 billion cubic feet this year.

However, uncertainty clouds the industry with a rise of COVID-19 cases and uncertainty about future demand.

The construction of large, world-scale chemical projects was in full throttle in 2018 and 2019, but these projects took a hit as COVID-19 took hold of the world in 2020. While there are some world-scale projects being planned, Trey Hamblet, Industrial Info’s vice president of research for chemical processing, expects the bulk of these projects will be moved into future years, to 2023 and beyond.

Power-to-X projects are becoming more prevalent. These can develop green hydrogen from renewable energy and can be used for further downstream products such as green ammonia and green methanol.

While the food and beverage industry is facing some supply constraints, these are not expected to greatly hinder capital spending. While the pandemic drove major spending in the at-home consumption sector, the hospitality industry is gaining ground as more people travel and feel comfortable going out.

Big trends include alternative foods from plant-based ingredients in the meat and dairy sectors. Randy Godet, Industrial Info’s vice president of research for food/beverage and pulp/paper/wood, says this is one of the biggest changes in the industry and is expected to affect it for years to come.

The outlook for the pulp, paper and wood industry was strong at the start of the year and has remained so. Primary drivers are the demand for paper and paperboard products. Certain products are in short supply even with manufacturing plants running at full capacity, opening the door for future capital expenditures. Demand also is strong for packaging materials as online shopping increases in popularity.

The construction sector is creating demand for wood products; companies in this sector are expected to move forward with planned expenditures. “Much of that capacity coming online will go toward the construction market, which is being driven by the housing market,” Godet explains. Strong spending is expected for the remainder of this year and 2022.

The United States is in a cycle of coal-fired and nuclear retirements as new buildouts occur. Industrial Info has identified 194 gigawatts (GW) of power units that have retired in North America since 2011, mostly coal-fired plants, representing about 106 GW.

Regarding nuclear retirements, 2021 is expected to be a record year in the United States as about 7 GW of nuclear is expected to retire between now and the end of 2025. Most of the baseload capacity lost has been replaced by natural gas, which experienced unprecedented buildouts a few years ago. This has slowed recently, and the buildout now has shifted toward wind and solar.

Solar is outpacing everything else in regard to new-build projects. Britt Burt, Industrial Info’s vice president of research for the power industry, says about 16 GW of solar power is expected to come online this year in North America and 18 GW in 2022.

The effects of COVID-19 on the global pharmaceutical-biotech industry have been dramatic and seem here to stay. Industrial Info is tracking more than $11 billion in active COVID-related projects, more than half of which have a kickoff date in the future.

In addition, COVID-19 has had a knock-on effect on demand for medications to help with other medical conditions. At the height of the pandemic, people were hesitant to seek medical treatment, causing these conditions to get worse over time.

All things considered, the industrial manufacturing industry made it through 2020 in relatively good shape. According to David Pickering, Industrial Info’s vice president of research for the industry, across the world, spending in the industry declined by about $20 billion, which is relatively modest on a global scale. He views 2021 as recovery year as sectors make adjustments to a changing world, with spending more or less at pre-pandemic levels next year.

Hotspots are data centers as more people turn online to learn, shop and socialize. Related to online shopping is a high buildout in distribution and warehouse facilities.

According to Pickering, projects in the semiconductor sector typically operate in 5- to 6-year cycles, where projects are developed as new technologies emerge. However, a global shortage of semiconductors has given this sector an artificial boost. I

In the spring of 2020, as COVID-19 grabbed hold, chip demand declined and manufacturing closures occurred. However, by early summer, demand began to increase, especially as the world embraced the stay-at-home ethos. At industrial plants, new technologies were implemented, further driving up demand.

According to Goldman Sachs, 169 sectors have been affected by the shortage, which has caused companies to boost semiconductor projects as they attempt to fill the gap. However, these projects take about 12 to 18 months to implement, so the shortage is expected to last into next year and possibly into 2023.

Buoyed by strong GDP growth across the world, metals prices have been rising this year, with steel prices in the United States tripling. But other factors are driving project activity in the metals and minerals industry, such as environmental, social and governance (ESG) policies.

“Decarbonization, electrification and productivity initiatives will continue to drive project spending as the North American market looks to increase metals and minerals supply in this age of energy transition,” notes Joe Govreau, Industrial Info’s vice president of research for metals and minerals.

Not only is the energy transition driving the production of metals and minerals needed for alternative forms of energy, but it is changing the way metals and minerals companies operate, with decarbonization initiatives being taken by several companies. Examples of activity in this area include the conversion of diesel-fueled trucks used in mining projects to battery-operated vehicles.

Industrial Info saw an 8.3 percent increase in North American metals and minerals project activity from the start of 2021 through mid-July; much of this was due to activity in the steel sector.