High-efficient boilers better regulate the heat in this 1964-era building.

Back in the 60s, urban apartment buildings were typically built well. Those good bones often included a solid foundation, brick envelope, square n’ true construction and a sensible design. And a veritable battleship in the basement to handle space and domestic water heating.

After years of indecision, owners of the multifamily structure at 6 Jason St., Arlington, Mass., a 34-unit apartment building just six miles from center-city Boston and built in 1964, finally decided to replace the original hydronic system, still chugging along after all these years.

“It was time to replace the system, even though it was tough considering the main parts of it were still working,” explains Bob Firth, the mechanical pro in charge of building management. “We admired the old boiler for its reliability, so we set high demands for its replacement — both in terms of what equipment was chosen and the quality of installation.”

Firth, who entered the hydronics industry in 1956, knows a thing or two about how heating systems should be installed. “This old installation was as nice as any I’ve seen, considering its age, so no quick, good-enough system install would do,” he says.

According to Firth, residents of the apartment building had only one compromise to deal with. If anything, there was too much heat. The building owner’s compromise was the money it cost to fuel the big ol’ heat plant — up to $40,000/year. It took some time, but they finally found the right solution.

The apartment building is home to 34 one- and two-bedroom apartments, each between 1,200 and 1,400 square feet in size. It’s rare for any of the apartments to go up for rent. Those familiar with the Arlington area love it. The six-story structure hasn’t aged a day and offers great views of the neighborhood and green spaces from within, on all sides.

Maintaining interior comfort in the dead of a Boston winter, however, was met the best way technology could provide at the time. Heat was a necessity, though at this apartment building — there was just too much of it. After all, the on-off-controlled boiler was 40 or 50 percent too large (hey, that’s the way things were done back in the day), and each interior space is wrapped with cast-iron baseboard.

For those who’ve never experienced heat delivered by cast-iron baseboard, Firth can tell you about that, too. “It’s as good as it gets for comfort,” he said. 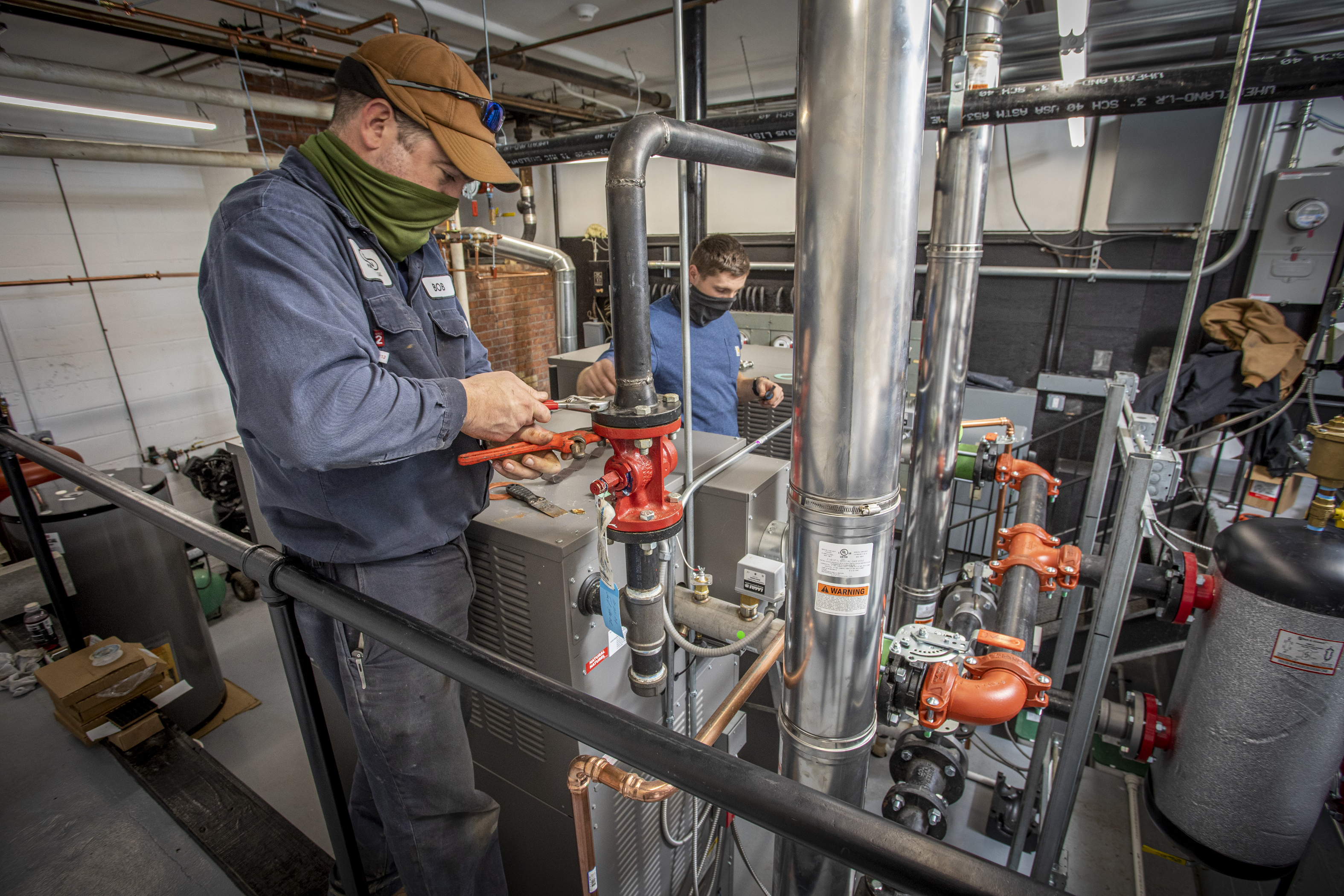 But when the original cast-iron sectional “porkchop” boiler, a 1.8 million BTU behemoth, circulated 200 F water to those baseboards, heat was on its way, like it or not. And the baseboard retained heat well, an attribute and a challenge.

During the winter, the best way for residents to regulate temperature — given the boiler’s all or nothing attitude and the baseboard’s penchant to share its heat long after the thermostat setting was reduced — was to open windows. Well, at least they got plenty of fresh air!

Eventually, the nearly 60-year-old fuel oil guzzler — which threw almost as much heat into the downstairs mechanical room as it did into those cast-iron baseboards — had to go. By the time the building’s owner, Carter Knight, and Firth decided to replace it, the boiler (though still serviceable) was operating at no higher than 50 or 60 percent efficiency on a good day.

The original boiler burned 10 gallons of fuel a minute at peak load and short-cycled continuously — firing for five or 10 minutes, then off throughout the heating season. On average, the building owner spent $30,000 to $40,000 for fuel to heat the building as well as domestic water.

Firth explains that the boiler initially drew No. 6 fuel oil (the least-refined and thickest fuel) from two 3,000-gallon tanks buried on the property. Long ago, it was smart to buy cheap oil for heating, but it presented one key challenge: the stuff was thick.

But leave it to Yankee ingenuity to solve the problem. A small, gas-fired heater was used to heat the oil on its way to the boiler, reducing its viscosity. A few years ago, however, they switched to much finer No. 2 fuel oil and decommissioned the old oil heater.

The original 130 gallons/minute main system pump, set for continuous, full-flow circulation through the heating season, kept hot water moving through the big, three-inch secondary main. From it, arteries tapped the river of heat for circulation to the apartments.

The new circulation strategy provides proper hydraulic separation between the primary and secondary lines, now managed by two variable-speed, proportional-pressure ECM circulators that cascade and rotate every 24 hours. When building thermostats call for heat, the circulators activate to meet demand. As valves close and heat demand is satisfied, the system circs ramp down to maintain system pressure while also saving energy.

Time for an Upgrade

Woe to the salesman looking for an easy sell to this crew, set on replacing a 57-year-old system, still slingin’ heat!

As it turns out, Firth was one of the first to say the old system met its match after he and others examined their options. Ultimately, they chose two 1 million BTU, 95 percent efficient Laars MagnaTherm FT (firetube) boilers with 20:1 turndown for full redundancy (Firth calls them the Twin Sisters).

“We knew it wasn’t going to be an inexpensive [boiler] replacement, but our sights were set on dependability, longevity and operational efficiency — and the Magnas’ had those attributes down pat,” he adds. 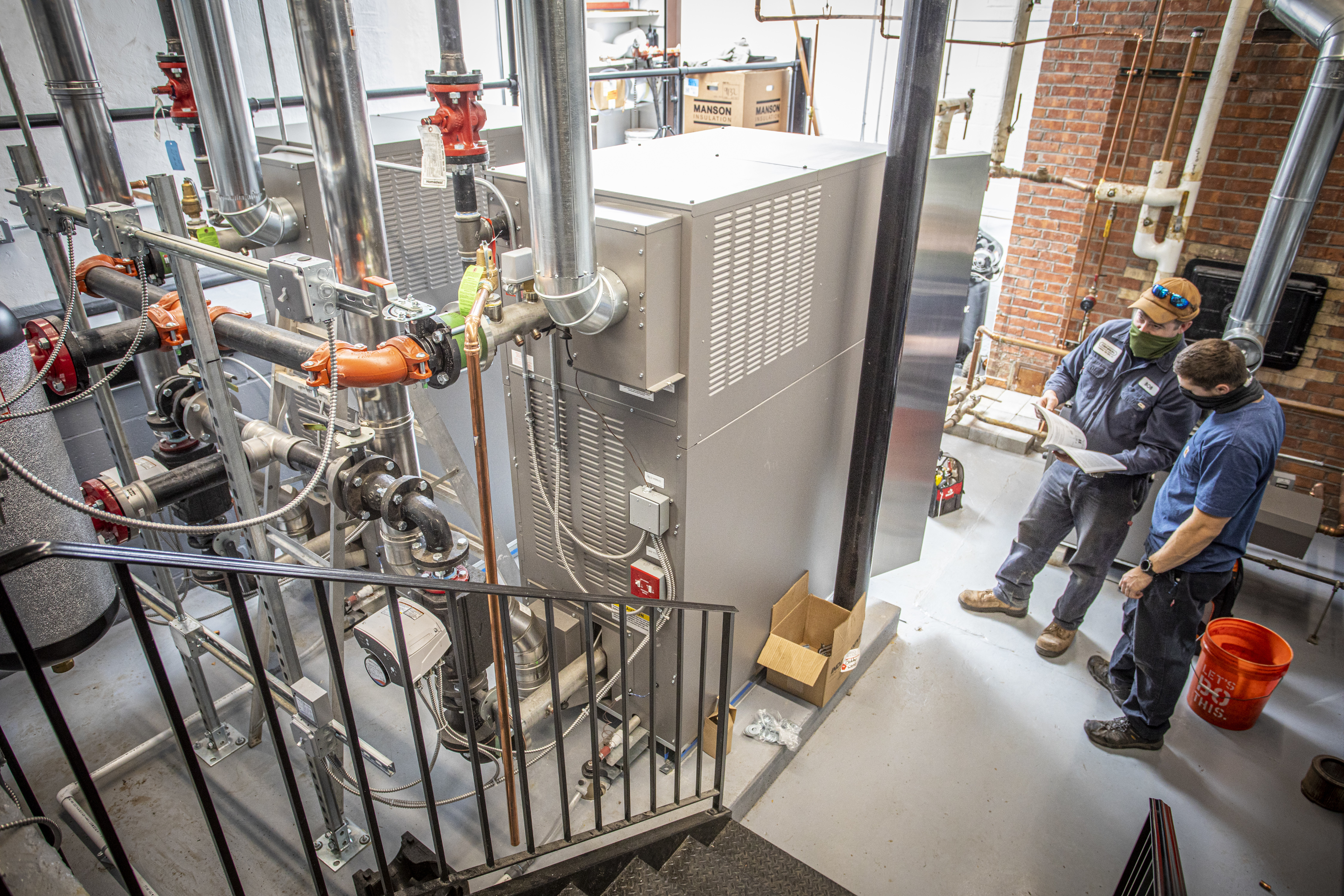 “We’re always glad to work with Denron,” said Manos. “It just so happens that through hard-won proof of their dedication to craft, they were chosen as the area’s factory-trained and authorized service agent for Laars, a distinction tough to lock in.”

Firth notes: “Now when the boilers are operational, it’s so quiet. You can check the drive on the Vari-Prime pumps and look at the firing rate on the boiler display — the systems are just purring along. What an improvement over the big ‘ol oil boiler’s on-off burner and unbearable heat down in the mechanical room. And there’s another benefit to the building owner: we’ve estimated the payback, or ROI, to be within five years.”

Among the key advantages the MagnaTherms brought to bear for the facility was the Vari-Prime pumping package. According to Fleming, Vari-Prime is a variable control package that maintains a user-chosen temperature rise between the inlet and outlet of the boiler — carefully matching load to boiler output, greatly improving performance and efficiency. Of course, outdoor reset guides boiler control continuously.

The MagnaTherm boilers are now set to operate in lead-lag succession, with one set as the primary for one day; its twin sister takes the lead the next. Their ideal operational range is 150 F to 180 F.

Key advantages offered by the Laars boilers include:

The boilers operate with an outdoor sensor, supplying heated fluid temperatures as low as 140 degrees during the spring and fall, Manos notes. “With the delta T of the boilers being between 20 and 30 degrees, we’re able to operate with return temps under 128 degrees — offering very high operational efficiency,” he adds. “And with a 20:1 turndown, the boilers can fire at up to 1 million BTUs each and turn down to an output of 50k BTUs — about what a dryer uses!”

Lower operating temperatures during the spring and fall months not only help to achieve higher efficiency and fuel savings but also provide easily modulated, controlled and comfortable heat.

“Some of the tenants even commented about how much more comfortable they were last winter,” Manos says. “And they would know because many of them had 30 years of experience to compare it to!”

Tenants are happy, and the windows are closed.

Finally, the replacement team decided to decouple the space heat from the provision of domestic water heat for residents of the apartment building. Previously, a still-working, original Taco heat exchanger and flow check handled that. Now, a 400 MBH Laars Mighty Therm2 boiler and two 120-gallon hot water storage tanks are dedicated to the task.

When property manager Bob Firth spoke about how the 6 Jason St. apartment building’s domestic water needs were met by the still-working original equipment, his tone was reverential.

“An old Taco heat exchanger hung from the mechanical room’s ceiling with a Taco flow check valve,” he says. “It was almost unbelievable; they still worked well after all those years. I sure have an appreciation for solid manufacturing.”

As it turns out, some of the old-school technology is still in use there. Pneumatic thermostats. “Though they work fine right now — even with the new equipment — the old pneumatic thermostats will eventually need to go.” The replacement team’s working through the best way to replace them now.

However, before that happens, here are some insights to smile about (if you’re not familiar with them):

For the controls to work, an air compressor maintains a set pressure within copper lines running from the mechanical room to all the living space thermostats. When a temp setting is changed, a valve opens as a signal for more (or less) hot water to the baseboards, emitting an audible sigh or hiss.

“Oh, the good ol’ days,” Firth says, who ran from the freight train sound of the compressor when it activated to keep those lines pressurized!