While the radiantly-heated greenhouse is the star of our show, there’s no point in not taking a tour of the larger estate that Frank Lloyd Wright built for Chicago businessman Fred B. Jones on Delevan Lake in Wisconsin.

Jones was successful businessman with Adams & Westlake, which made hardware for all manners of transportation, including steamships, streetcars, and the burgeoning railroad industry. He worked his way up from traveling salesman to managing director, and eventually to company vice president when he retired at the age of 50.

Wright designed a number of “cottages” on the banks of the lake for wealthy Chicagoans, but none grander than Penwern. From the sound of it, Jones enjoyed throwing good parties and his lifestyle determined Wright’s design for Penwern.

The main house is 6,552 square feet inside, with decks and porches totaling another 2,132 square feet looking out on the lake, ideal for entertaining. Jones used a tower attached to the main home for men-only card games. That way, the men could get away from the ladies and the ladies could get away from the cigar smoke. A tin urinal was even built into the wall of the game room.

All of which was probably a good thing since Wright added three copper faucets throughout the home solely to dispense water for Jones’ drink of choice: whisky and water. Plus, to make sure there was plenty of ice on hand long before the advent of modern refrigeration, Wright designed one section of the stables as an icehouse to store blocks of ice harvested from the lake in winter.

This was early in Wright’s career while the architect was still developing his architectural vocabulary. As such, the buildings at Penwern aren’t as easily recognized as the Prairie Style of architecture that Wright perfected throughout a career that lasted almost 70 years

Still, there are Wright trademarks apparent in his Penwern design. Wright believed buildings should be “organic” or, in other words, blend into their surroundings. The two-story main house, for example appears visually low to the ground. The boathouse was situated so it wouldn’t obstruct the view of the lake from the house. 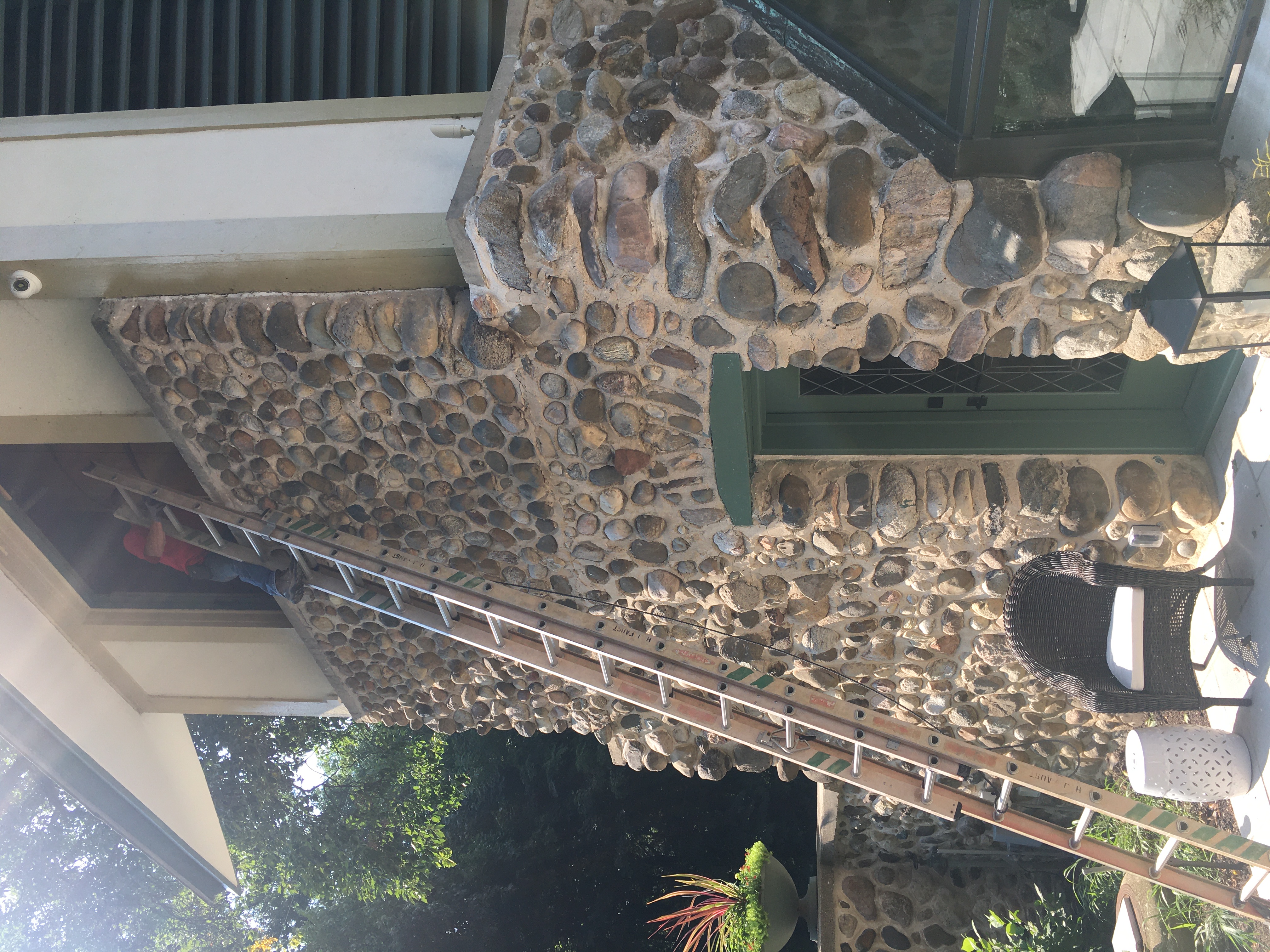 Wright favored radiant heat for many of his homes, but Penwern was only meant as a summer getaway. The only source of heat were fireplaces made from Roman brick, longer and flatter than standard brick, which emphasized the horizontal lines of Wright’s signature designs.

The gatehouse, however, which provided a home for Jones’ groundskeeper and his family, was winterized. At some point, Jones did add a basement and installed a coal furnace so he could keep the main home open later into the fall.

The Penwern estate originally consisted of 10 acres on 600 feet of lakefront, including a picnic grove on the east side of the property. When Jones passed away in 1933, the property sat empty while a group of cousins fought over his will.

A second owner eventually bought the property in 1938 and owned it for almost 50 years, making additions and alterations during that time to suit their needs. (Even Jones started making changes to the main home as early as 1909, covering up some of the living room and dining room windows.)

By the time John and Susan Major bought the main house and stable in 1994, the gatehouse was owned by someone else, and, as we learned in the main feature, the greenhouse was long gone. Also, an arson fire destroyed the boathouse in 1978.

In 2001, the Majors bought the gatehouse, too, and began restoring Wright’s vision to Penwern, thanks to 17 original drawings for the buildings on Penwern discovered by a previous owner. These drawings were integral to their plans to bring Penwern back to the original vision that Wright created for Jones.

Their first projects included reinforcing the support of the house, straightening the floors, adding insulation and installing new furnaces. Later, they tore down additions to both main house and gatehouse – so much so, that early on many locals accused them of “ruining” the architect’s designs. The Majors also restored and rebuilt the front of the stable to Wright’s plans.

By 2002, the couple used Wright’s plans to rebuild the boathouse. Finally, upon completion of the greenhouse last year, Wright’s vision for Penwern was once again complete.

Outside the greenhouse, the Majors also reconstructed a semicircular boulder wall to the east of the water tower. The design was vital since it echoes the semicircular porches at the main house, plus the archways of the home and boathouse.

“At one level, we rebuilt the greenhouse to complete the last piece of the original design.” John Major adds. “But, as we got into it, we realized that the greenhouse is a quintessential example of FLW design. Small becomes large; large becomes small; a huge space that minimally impacts the landscape around it. It’s to us, what FLW was all about.”