With space at a premium, the boiler room ended up about 30 feet high inside an old cedar barrel water tower.

An estate designed in the 1900s by famed architect Frank Lloyd Wright has undergone a 25-year restoration to bring it back to its original glory. Chicago businessman Fred B. Jones hired Wright to design a summer getaway along Delavan Lake, located in Southeastern Wisconsin. Between 1900-1903, Wright designed a main house, a boathouse, a stable, a gatehouse and a greenhouse.

The name Penwern is Welsh and means “head of the field,” and it is believed Wright named the estate after the ancestral home of his great-grandmother who immigrated to Wisconsin from Wales in the late 1800s.

Since 1994, Penwern has been owned by John and Susan Major, only the fourth owners of the property.

When they first purchased it, they were drawn by the beauty of the setting and the unique structure of the home. When they realized they had an historic gem, they became stewards of the property, carefully restoring it according to original architectural drawings. (For more on the comprehensive restoration of the property, see our sidebar.)

The last part of Penwern’s renewal was completed last year with the rebuild of the greenhouse. The greenhouse was part of the estate’s gatehouse, constructed between a water tower and a boulder wall.

“The greenhouse over the years decayed and was eventually allowed to fall in on itself,” John Major says “Previous owners put a carport there and used it for parking.”

While Jones liked to cultivate roses, the Majors saw the greenhouse repurposed for multiuse, not only for personal relaxation, but also as an entertainment space.

But staying true to the complete historical renovation of Penwern, the Majors were committed to rebuilding the greenhouse as close to the original as possible, but with some modern amenities.

“We chose to have the greenhouse heated and cooled so it could be used year-round,” John adds. “That raised some interesting challenges because of where to put the mechanicals.” 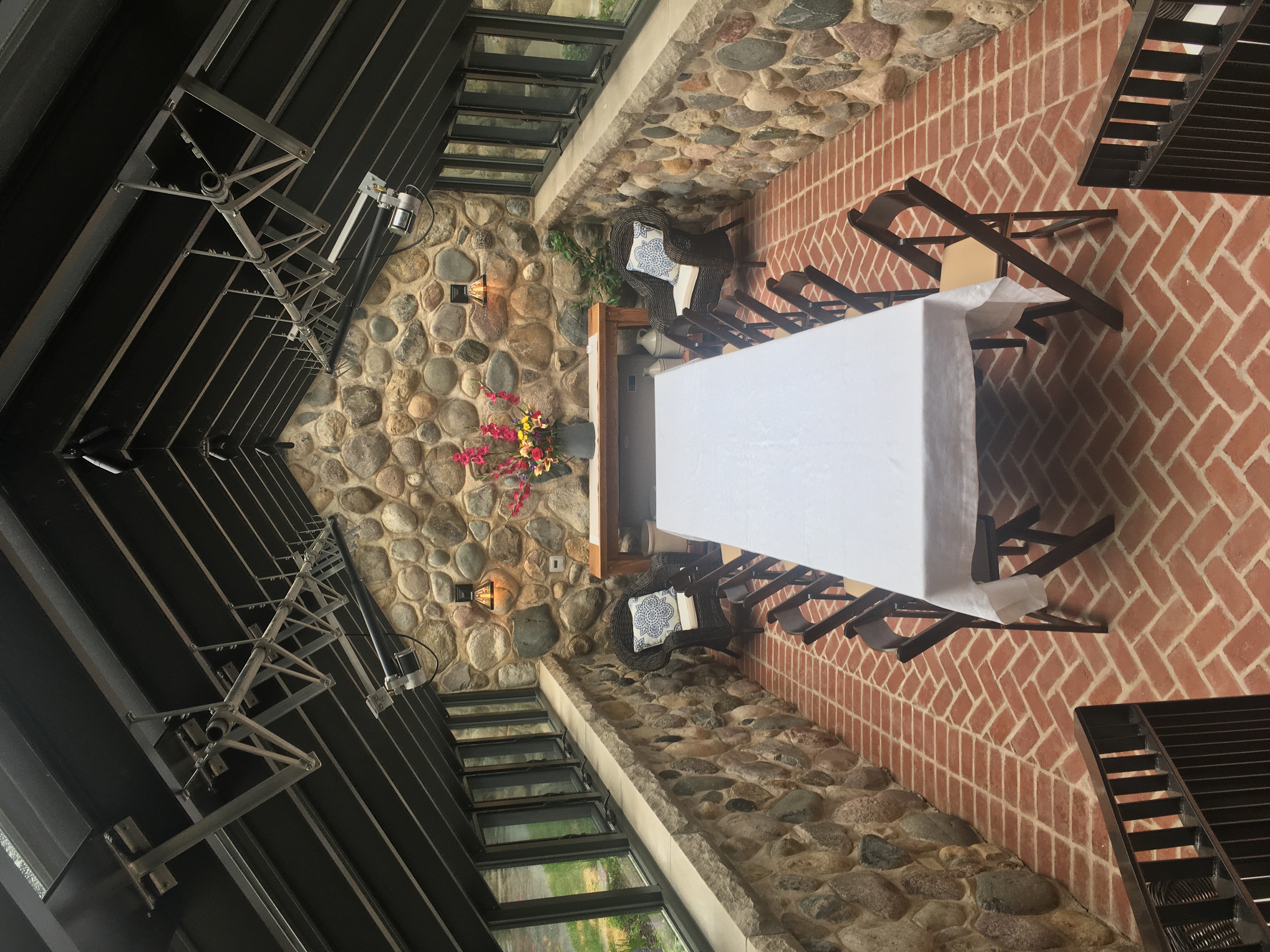 The Majors have long entrusted H. J. Faust Heating & Air Conditioning, Burlington, Wisconsin, to care for Penwern’s HVAC systems and so they were the company of choice for the greenhouse project.

Koch and McFadzen worked with the Majors, the architect, project manager and engineer, to design build the systems specifically for this greenhouse.

Providing assistance was Ted Schmelling, territory manager for Hot Water Products, a manufacturers rep agency based in Milwaukee. Schmelling and his team provided the overall schematics and recommended the hydronic components.

“The goal of Sue and John Major was to stick to the original greenhouse plan as much as possible,” Faust says. “Our job was to achieve that goal with up-to-date mechanical systems.”

McFadzen adds: “From the beginning, John knew he wanted hydronics from a comfort standpoint and also because it is much easier to conceal than forced air and its ductwork. Plus, with radiant, you are heating a mass. Once you bring the floor up to temperature, it is much more efficient than heating the air surrounding it.”

Before construction, the “floor” of the greenhouse (24 x 12 feet) was dirt so the first step was to put down 2-inch foam board insulation followed by Crete-Heat Insulated Floor Panel System, which also has 2 inches of solid EPS foam with a vapor barrier of 10-millimeters of polystyrene film. The interlocking panels of the system made for easy installation of 5/8-inch PEXa tubing. This was followed by a concrete pour and after a time, the finished flooring.

“We used Crete-Heat because it provided added insulation and also made the installation faster because the tubing snaps into the panels,” McFadzen explains. “Once you get up a couple of feet from the ground, you are all glass, so the only thing we could control heat-wise was the foundation.”

Providing the radiant heat is a Viessmann Vitodens 200 boiler.

“It’s a high-efficiency and fully modulating boiler with outdoor reset so depending on temperatures, it can operate at a very low rate and very high rate,” McFadzen says. “Viessmann is known for its German engineering, reliability and durability. Given the scope of the project, it’s a good fit.”

The boiler is tucked into a former water tank on the second floor of the tower, along with all the mechanical components.

As the work was done in stages, the boiler and radiant heat tubing was installed in the fall of 2019 even before the greenhouse structure was fully built. In fact, the custom-made glass panels did not arrive until late spring 2020.

However, as winter set in and before the glass was installed, other subcontractors wanted to lay stone and pavers in the greenhouse, and they wanted heat

“General contractor for Penwern, Bill Orkild, designed a tarp system with wooden framing to keep the area enclosed,” McFadzen explained. “I was skeptical about our ability to keep it conditioned because of the winter, but we were able to fire up the boiler and keep the project moving.”

“The tower room and the greenhouse are going to heat up and cool down at completely different rates so two systems are required,” McFadzen said.

The greenhouse would not accommodate a wall-mounted unit, so a floor-mount unit was placed against the boulder end wall. Again, because the desire to keep the mechanical hidden, the solution was to conceal it with a custom-made table to stand over it.

“We worked in conjunction with Orkild,” McFadzen says, “who designed the table, and Lennox engineers on proper clearance so the unit would operate properly and we could cool the greenhouse as desired. In addition, to perfectly fit the floor-mount unit against the boulder wall, professional stone cutters were brought in.”

In the tower, installation was a bit simpler but still had modifications. The cover was taken off the wall cassette and custom painted by an auto body shop to blend in with the color of the wood.

“If you are looking up 11 feet in the tower room, you have to be really looking for it to know it’s there,” Koch says. “Again, the goal was to hide the mini split to keep that original architecture as true as possible.” 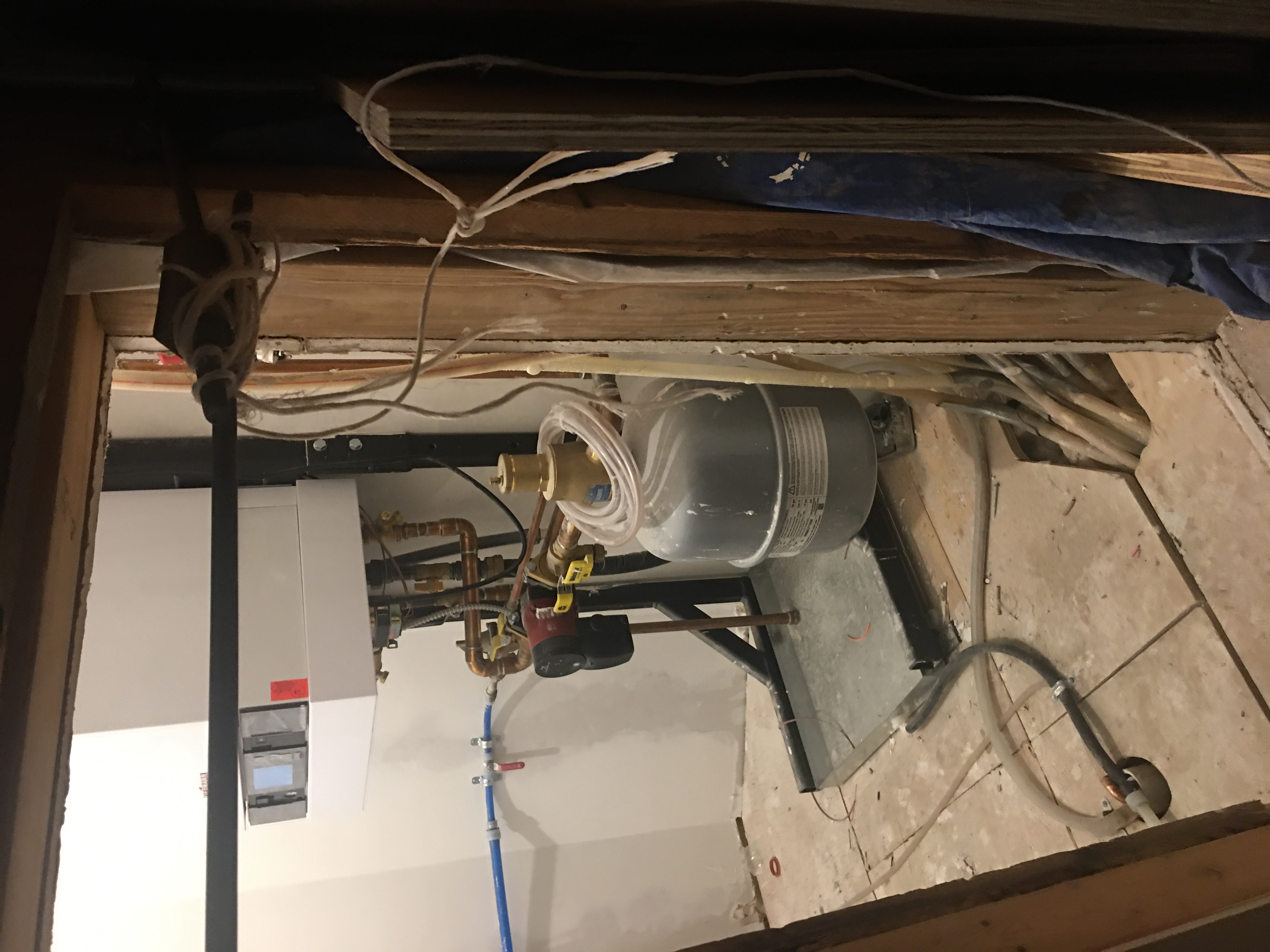 The outdoor condenser units were placed in an area outside of a concrete wall and the copper line sets also had to be not visible. PVC was used as an underground conduit and the lines went up through the tower room and then back down to the cooling unit.

“There were some challenges on how we were going to get those copper lines through the PVC runs of 50 to 60 feet in length,” McFadzen says. “Our installer put string in the PVC and used a leaf blower to blow it all the way through to the other side so we could attach the line set and pull it back through. It was such a unique project we had to think outside the box constantly to make it look the way the homeowners wanted to and have the mechanicals operate the way they should.”

Despite the complexity of the project the majority of the work was completed by a two-person experienced crew.

“It was important to us to maintain consistency in the project because of the level of communication required,” McFadzen says. “As conversations take place, and if there was one thing lost in translation, so to speak, that would be an expensive mistake on our part. There was no manual for this.”

Faust adds: “The time range of the project also was a factor with this 18-month project. We worked in phases and sometimes there was a break of a month or two before we could go back in. That presents its own challenge. For instance, the line sets were buried months before we started the units up, so a triple evacuation was necessary. Of course, you keep job records but as Pete said, it is not cut and dried for this type of project. Having the same team on the entire project is critical for this type of project.

Schmelling and Hot Water Products were also integral to the project.

“I’ve had a long association with Hot Water Products,” McFadzen says. “We were already working with them on some other projects and they bring to the table a depth of knowledge that is unmatched by other vendors. When we knew this project was coming in, they were just the type of company we wanted to partner with. Ted turned out to be invaluable offering his insight on design. Hot Water Products operates well above average in terms of the support they give us.”

Though this project is more of a special use case, H. J. Faust is anticipating more demand for radiant as homeowners are becoming more educated and interested in radiant as a way of heating different spaces.

“With some customers, you say boiler and they say no way,” McFadzen says. “But today’s boilers are extremely efficient and smart in the way they can be set up and operated. The more you educate people about hydronic in-floor heat, the more interested they are and we as HVAC contractors get more opportunity to provide that product.”

This article was originally published in the Fall 2020 edition of The Wisconsin PHC Contractor magazine and is reprinted with permission.