Although there are at least 60 species of Legionella bacteria, Legionella pneumophila bacteria account for the great majority of cases of Legionnaires’ disease. Legionella are common in warm, freshwater environments such as lakes and streams as well as soils. They can also grow and thrive in building water systems. “Finished,” disinfected water leaving a drinking water treatment plant is likely to be virtually free of Legionella bacteria. However, Legionella contamination can occur at any point during water’s transit through distribution pipe networks to various facilities and in-building (“premise”) plumbing systems. For example, pipe leaks and breaks as well as water pressure drops can allow recontamination and colonization of premise plumbing by Legionella from soil and groundwater. 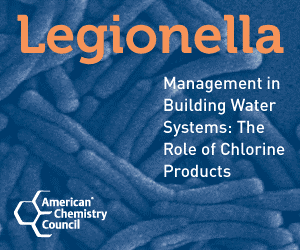 Legionella and other bacteria, fungi, and protozoa are commonly found in slimy coatings called biofilms on pipe walls. Biofilms allow aquatic microorganisms to literally stick together and interact with one another. To make matters worse, Legionella and other bacteria can survive inside some free-living, single-celled amoebas (protozoa) that also live within biofilms, where they are at least partially shielded from contact with disinfectants.

These conditions can allow Legionella to grow to high levels. Legionella can detach from biofilms at any time, while microbe-rich fragments of biofilms can become suspended in water and transported to local taps and showerheads during normal use and flows.

Legionella bacteria can be released in substantial amounts during large water pressure changes called “water hammer” and turbulence, such as following local use of a fire hydrant. Corrosion can also mobilize biofilms and sediments that release Legionella, as was case in the Flint, Michigan, beginning in 2014. For these reasons, biofilm control is always a key challenge in any building water system.

Buildings that have been idle for an extended period of time, for any reason, are particularly susceptible to Legionella growth as critical residual disinfectant levels—typically chlorine or chloramine — drop or disappear in stagnant water. This is of particular public health concern during the ongoing COVID-19 pandemic, which has resulted in fully or partially closed buildings throughout the nation.

Hot water tanks are often deliberately set at lower temperatures year-round to conserve energy, potentially resulting in the unintended consequence of providing favorable Legionella growth conditions. For this reason, to maintain hot water temperatures of ~131°F at all taps, hot water tank and system temperatures of 140°F to 149°F are widely recommended, including by the U.S. Centers for Disease Control and Prevention (CDC). Because initially very hot water will cool in transit and storage during overnight hours and other non-use periods, pipes located far from the source of hot water might be within a temperature range that supports Legionella bacteria growth or regrowth.

Further, chemical disinfectant residuals can be lost more rapidly in heated water through accelerated chemical and physical processes, which can also lead to favorable Legionella growth conditions. Maintaining an adequate disinfectant residual in municipal drinking water supplies as well as in building premise plumbing are critical to protecting public health.

People can be exposed to Legionella when they inhale, but not swallow, small water droplets (aerosols) contaminated with the bacteria. Such exposure can occur from showering, splashing, spa or therapeutic pool use, decorative water features such as cascades, as well as blowdown from cooling systems, heat exchangers, and even “fugitive aerosols” from municipal and industrial water and wastewater treatment processes. Legionella cannot be spread by people already infected by the bacteria (i.e., it is not contagious). Typically, only a handful of persons exposed to Legionella bacteria through inhalation develop Legionnaires’ disease, a severe and potentially deadly form of pneumonia. In healthy individuals, inhaling Legionella is much more likely to result in Pontiac fever—a milder, flu-like illness, which is often not diagnosed, treated, or reported.

Individuals and groups most at risk for Legionnaires’ disease include occupants of healthcare facilities, smokers, the elderly, and immune-compromised individuals such as persons undergoing cancer treatment. Legionnaires’ disease symptoms typically develop in susceptible people 2 to 10 days after exposure to a sufficiently high (“infectious”) dose. Early symptoms typically include headache, muscle pain, chills, fever up to 104°F or higher. Later symptoms include cough and shortness of breath, while deaths are typically caused by respiratory failure, septic shock, and kidney failure.

CDC has identified Legionella bacteria as the most common, increasing, and largely preventable cause of reported drinking water-associated waterborne disease outbreaks for the past decade. They are the only type of reported U.S. outbreak that has resulted in deaths. Worldwide, thousands of cases and hundreds of deaths from inhalation of Legionella have been reported in the past decade. Contracting Legionnaires’ disease, or Pontiac fever, is a risk in any part of the world. However, these risks are likely to be more common in the developed world given the extent and density of indoor plumbing, cooling towers, hot tubs and spas, and elevated concentrations of high-risk patients in hospitals and nursing homes.

The U.S. Environmental Protection Agency does not regulate Legionella in building water systems, so policies and procedures affecting location-specific mitigation measures vary widely and are determined by individual states and local governments. A growing number of reports and guidelines on Legionella prevention and mitigation technologies are available, but can be difficult to interpret and apply at specific buildings. Further, numerous analytical methods to detect Legionella bacteria exist and continue to be developed to evaluate premise plumbing, cooling towers, and other water features.

The ACC-sponsored Legionella management booklet compiles much of this information on prevention and mitigation of Legionella risks into one freely available, accessible guide. Written by noted Legionella expert Dr. Joseph Cotruvo, the 33-page booklet spans five chapters and includes an executive summary. It provides an overview of major Legionella-related regulations and guidelines, and summarizes information to help building managers, engineers, and owners better understand and manage the risks of Legionella in premise plumbing and other building water system features. 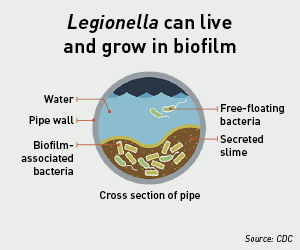 The booklet also addresses system flushing, shock heat, and shock chlorination in detail. These can rapidly reduce Legionella bacteria and biofilms prior to longer-term maintenance and mitigation. Periodic flushing and purging all taps and outlets can remove some accumulated sediments and biofilm. It also reduces “water age” in low-use and dead-end portions of a building water system. Because thermal and shock chlorination usually take several hours or more, they are often performed overnight with pre-notification alerts and temporary use restrictions to protect residents and guests from scalding and other risks. In some cases, biofilm control might also include physical removal through abrasive scouring.

The freely available booklet presents a practical and preventative approach to control Legionella-related risks, focusing on real-world examples and currently available methods for assessment, mitigation, and prevention. It emphasizes that any prevention and mitigation of Legionella risk in building water systems should be associated with the development, application, and periodic review and revision of a site-specific comprehensive Water Safety/ Management Plan (or the equivalent and in accordance with CDC guidance) for maintaining improved changes in building water system conditions. Lastly, the booklet also cites key literature and guidance for those interested in exploring the relevant issues and technologies in greater detail before assessment or mitigation decisions are made and contractors engaged.

To help avoid an increase in Legionella outbreaks as Americans continue to return to work and school, the ACC-sponsored booklet can help promote the safety of building water systems, whether after an extended shutdown or during normal operations.

Download a free copy of the booklet at legionellabooklet.com.

Engineers & Specifiers Engineering Legionella Legionnaires' Disease
You must login or register in order to post a comment.