The primary cause for fire sprinkler system failures is an improperly or inadvertently closed system control valve.

Automatic fire suppression systems are an essential safety feature relied upon to achieve an appropriate and required level of fire and life safety for buildings and their occupants. Largely through the application and enforcement of widely recognized codes and standards, fire suppression systems have earned a deserved reputation for reliability and effectiveness.

When properly designed, installed, inspected and maintained, these systems can be expected to respond to a potentially damaging fire when called upon — even after lying dormant for many, many years.

As a result of their historical reliability, engineers have a level of confidence that the fire suppression systems they design or specify under adopted standards will operate and adequately perform when called upon. This confidence is derived mainly from and safeguarded by specifying compliance with recognized standards, rather than a discrete risk or reliability analysis.

However, notwithstanding their earned reliability, there are instances where fire suppression systems fail or do not perform as intended. Statistically, the primary cause for such failures is an improperly or inadvertently closed system control valve. This occurs despite code-required valve supervision and inspection requirements. Other instances happen where the cause of the failure could or arguably should have been identified in advance, preventing the system failure.

Throughout my career, I have participated in more than 1,000 investigations of fires and other failures, many of which involved the operation of an installed fire suppression system. This experience revealed that, in my view, professionals involved in the design, inspection and maintenance of fire suppression systems were often in a position to identify the circumstance or condition that caused or contributed to the failure before it occurred.

To support the outstanding reliability record of fire suppression systems, engineers and others should be mindful that relying simply on specifying compliance with an applicable code or standards may not, by itself, be sufficient to assure continued and reliable performance of a fire suppression system over its life cycle or that of the building it protects.

Rather, engineers and other fire safety professionals should strive for a deeper awareness of fire-suppression system standard requirements, along with potential failure scenarios and actively look for opportunities to guard against their occurrence. This column overviews just one instance where the failure to identify a circumstance or condition before its occurrence either caused or contributed to a fire suppression system's inability to perform as intended.

A fire occurred at a sizeable solid-waste recycling facility, causing extensive damage to the structure and its contents. The recycling operation used process equipment interconnected by conveyors at floor level and above the plant floor. Fire origin and cause investigators determined that the fire originated in a piece of process equipment.

The entire facility was provided with an automatic fire sprinkler system intended to protect the operation from a fire per recognized codes and standards. Notwithstanding the installed sprinkler system, the subject fire caused more than 120 ceiling-level sprinklers to open and discharge water over more than 11,000 ft.² of the plant’s floor area. 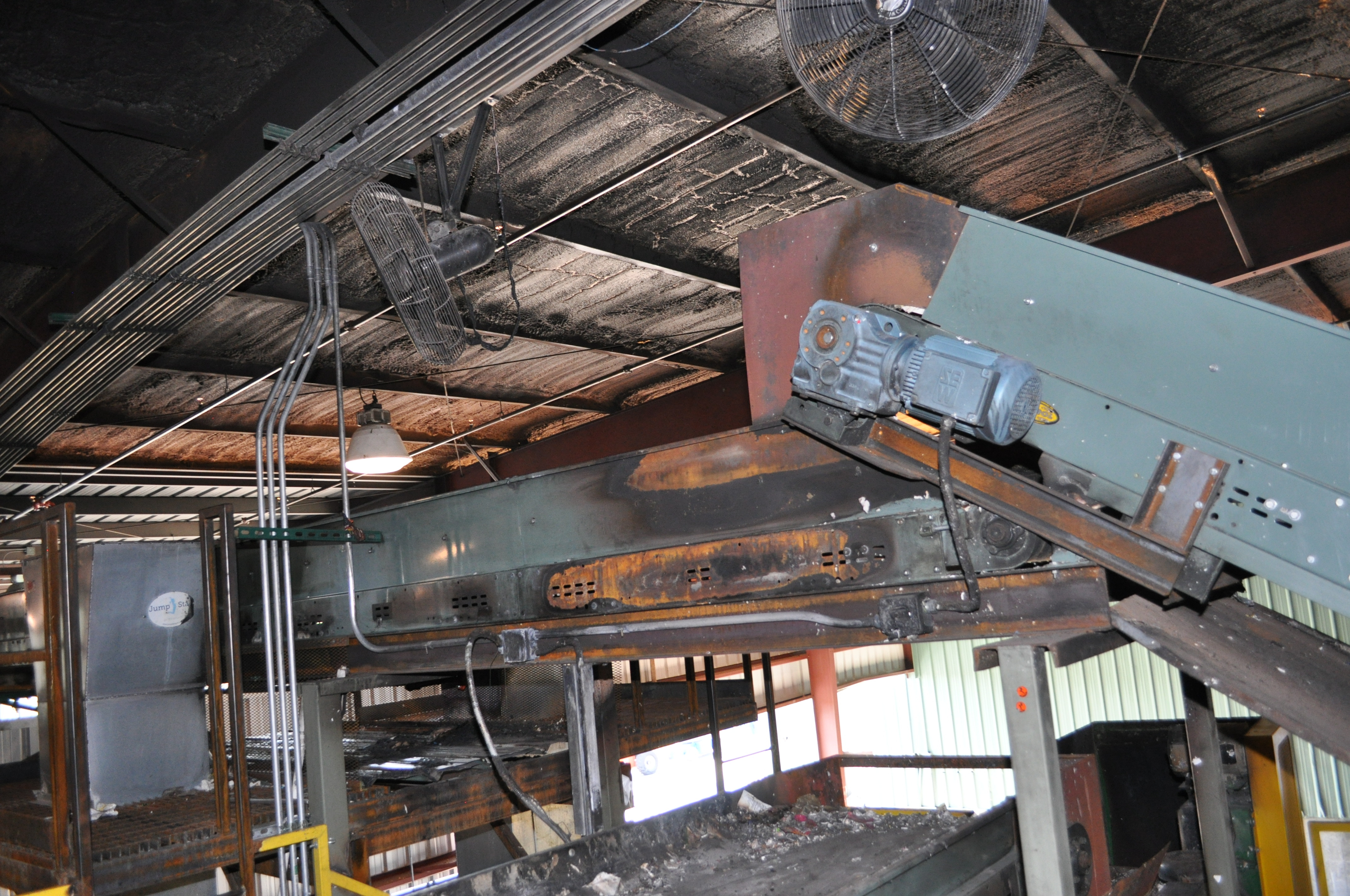 The facility's sprinkler system was specified to be in accordance with NFPA 13, Standard for the Installation of Sprinkler Systems, published by the National Fire Protection Association. NFPA 13 provides the minimum requirements for the design and installation of automatic fire sprinkler systems. The dry pipe system was designed to achieve a design density of 0.2 gallons/minute/ft.² over 1,950 ft.² (Ordinary Hazard II).

As part of its requirements, NFPA 13 details the proper spacing, location and position of sprinklers. One of the fundamental principles for sprinklers is they must be located to provide satisfactory performance concerning activation time and water distribution.

As one means to achieve this principle, NFPA 13 contains detailed requirements addressing obstructions that prevent ceiling-level sprinkler discharge from reaching a hazard below. One such condition is that sprinklers are required under all fixed obstructions (such as conveyors) more than 4 feet (1.2 m) wide.

As noted, the subject fire initially started small at a piece of process equipment. It then spread to an area beneath a conveyor, which created an obstructed area, preventing ceiling sprinkler discharge from reaching the fire. Since the conveyor was greater than 4-feet-wide, sprinklers were required in this area per NFPA 13. However, there were no such sprinklers installed.

Due to the omission of these required sprinklers, the fire spread to cause severe physical damage to transfer belts, process equipment and the building, as well as significant economic loss from the interruption of plant operations. Figure 3 shows an example of the extent of fire damage to the facility. 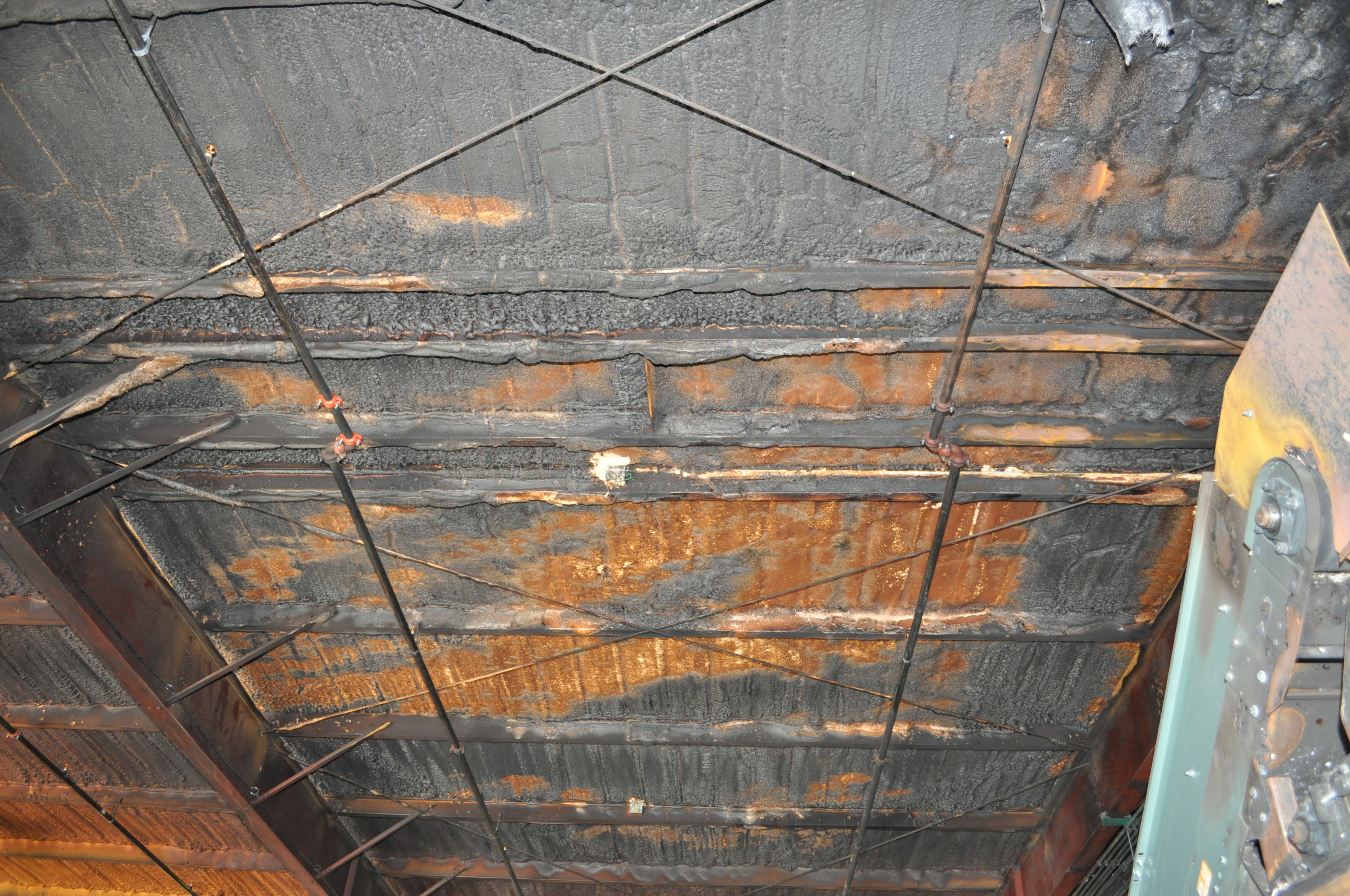 The extensive conveying systems in the facility were part of the original construction, open and obvious; nonetheless, the need for sprinklers for the obstructed areas was not identified by the engineers, designers, contractors, inspectors and others involved in the construction of the facility.

In this instance, it was clear that deeper awareness and understanding of the fundamental principles for proper sprinkler performance, including the specific requirements of NFPA 13, would have prevented this fire’s spread and the resulting extensive property damage and economic loss.

When properly designed and installed, fire suppression systems have a history of reliable and durable performance. However, when system failures occur, the lessons learned from related investigations can provide useful knowledge and awareness to practicing engineers and fire protection professionals.