Roberto Mazzoni, then a relatively new radiant heat installer, describes his nervous anticipation of an award ceremony held by the Radiant Panel Association (RPA*). The year was 2004, and RPA’s meeting was being held at the new trade center in Boston.

“That was my first RPA meeting,” Mazzoni said. “Those two had the entire room of 200-some people in stitches. I was amazed at how much fun people could have, while at the same time improve their skills and learn from others. It was a great event until it was time to announce RPA’s installation awards. That’s when I developed a giant ‘gulp’ in my throat.”

Roberto and Luis (Lou) Mazzoni’s RPA award entry for Franklinville, New Jersey-based Polartemp Inc., described their work at a commercial facility that begun in 2003 and completed in 2004. The job entailed the use of 7 miles of 5/8-inch radiant tubing to heat 26,400 square feet of space for a computer remanufacturing facility.

As vice president and part owner for the firm, Roberto Mazzoni did most of the work on the awards submission, so Lou Mazzoni, president of the company, suggested he go the RPA event while he “held down the ranch.”

Roberto Mazzoni’s anxiety grew as he watched each residential award winner step up to the podium to say a few words about their work. “I didn’t want to speak before the group. Ours was only a first-time entry, and I didn’t feel worthy of recognition. I began to regret the submission,” he said.

The commercial awards came next.

“I was relieved when the third-place award was given to another firm; that was the award – if any – I felt might fit our entry. Then they turned their attention to the second award and suddenly I realized if the third place entry wasn’t ours, then we could be the second position. I began to sweat!" Mazzoni recalled.

He said, “Relief swept over me when the second award was given to another firm, and I relaxed, enjoying the installer’s description of how they completed a really fine job.”

“And then it hit me,” he continued. “There was one more award to go – first place. Then I wondered if this is what the beginning of a heart attack might feel like.”

“Everyone saw that I was a bit tongue-tied, but they didn’t mind,” he continued. “What began as a real mess for me ended with wave after wave of relief and a feeling of complete support from a group of my peers.”

He said, “How crazy it is that we can go from fear and self-rejection to absolute joy in such a short time?”

Years after the award, Mazzoni's confidence in Polartemp’s work has grown. “The award was like a jolt of confidence, exactly when we needed it most,” Mazzoni said. “We’ve since leveraged that experience and skill, into many new, ever-more complex, demanding jobs.” 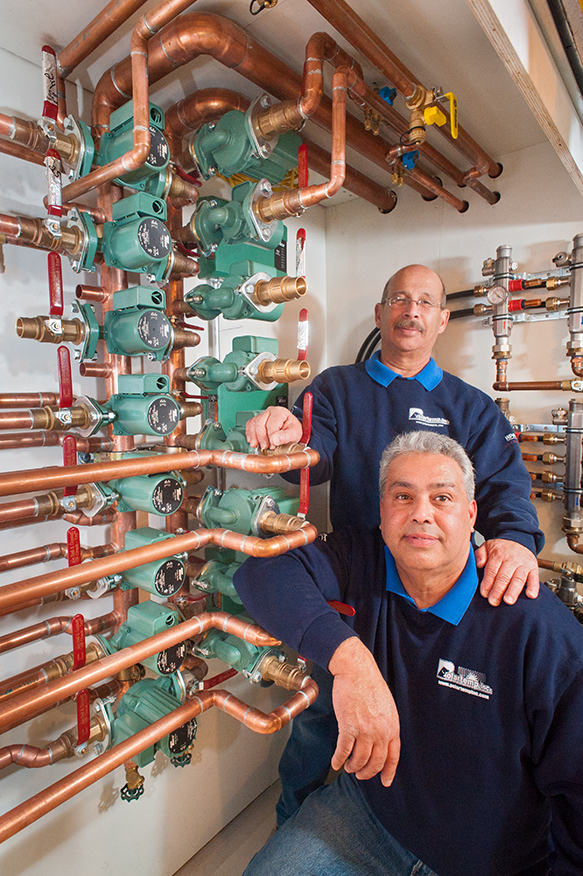 “It seems like a long time ago, and yesterday at the same time,” recalled Mazzoni of that moment in Boston.

Recently, Roberto Mazzoni stood next to his brother, Lou Mazzoni, as jobsite sounds emanated from a big custom home project behind them – their latest project. There, on the New Jersey coast, a magnificent beach home was their 10- or 12-hour a day home-away-from-home.

Polartemp’s entire crew of six installation pros were many months into the job, with many more to go.

According to Roberto, their father, Luis G. Mazzoni, started the firm in 1971 with a focus more on refrigerant-based cooling systems, including grocery store, bar and tavern work. “It was a fascination with refrigerant flow that drew us into hydronic work, especially radiant heat,” Roberto Mazzoni explained. 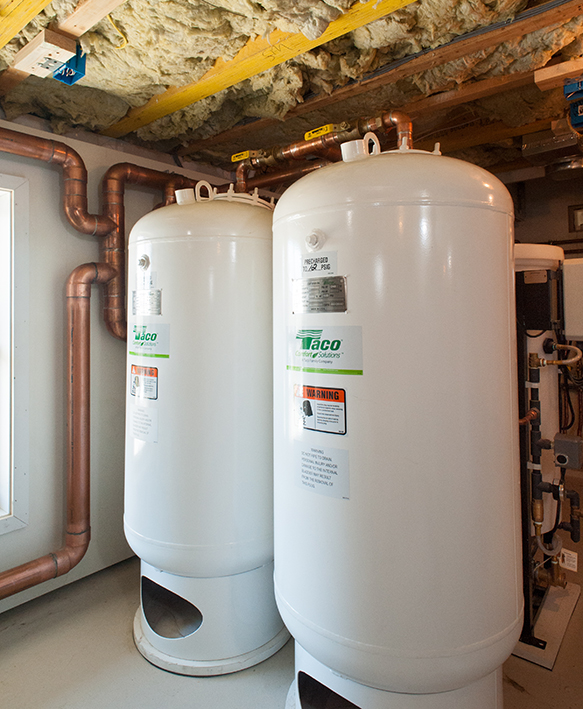 At this coastal New Jersey project, the day’s itinerary involved my meeting with Roberto and Lou Mazzoni; the goal: making refinements to the 30-ton geothermal water-to-water control strategy.

At this jobsite, Polartemp installed a bank of Taco ECM-powered pumps controlling flow for water-to-water geothermal systems that work in concert with hydro-air as the home’s main source of heat, tied to outdoor reset. All of these interact routinely with a Wi-Fi-enabled home automation system and iWorX controls for HVAC functions.

It sounds a bit daunting, but it isn’t. If we look at its many parts, it appears more like a commercial job than a home. But when we tear it down to essentials, this system is sensible and logical, too.

Roberto and Lou Mazzoni had concerns initially, but they worked through it together.

A few questions lingered, and that’s why I met with them. The brothers and I turned our attention to controls for the three, 10-ton Carrier geothermal heat pumps – tied to one of two automated Skidmore glycol injection fill systems – while other members of the Polartemp team installed ducted Loyes Industries fire dampers, and artfully-installed insulated sheet metal duct runs to more of the concealed ceiling delivery ports.

On the home’s upper level, Roberto Mazzoni later explained that every duct ended at one of more than a 60-supply ports/terminations that would deliver geothermal water-to-air heat, or cooling.

All of the air delivery ports, which they fabricated out of metal into wide, 2- to 5-foot long terminations, are disguised by 12-inch high crown molding in every room and hallway of the home – there for aesthetic reasons, but also to hide the HVAC terminations. The crown molding is installed 1 inch below the ceiling to both hide and direct gentle airflow evenly throughout interior spaces. The homeowner has chosen to highlight this detail with low-voltage LED accent lighting.

Stonewood Builders LLC owner Jim Card, who is the GC and master conductor on this jobsite, said that this style of home, and scope of work, is their forté.

“We build custom beach-style homes for very discriminating customers – folks who want the very best, and then more,” he said. “We’ve grown into this work and enjoy its complexity – but only when the right subs know their craft, as Polartemp does. They’ve taken every challenge in stride. Their mechanical work is the best I’ve seen.

“This is the toughest home I’ve ever framed, and I’ve framed hundreds of homes over 30 years in the trade,” Card added. “That says a lot about the complexity of the design, and the structural support for it with a lot of concrete and steel.”

That aspect of the job – especially the plentiful use of steel – challenges the task of providing sophisticated, uncompromising HVAC solutions.

“So, when I review Polartemp’s work here and see how they solved the problems they encountered, I was impressed,” Card said. “They’re the most exacting and detailed mechanical contracting firm I’ve ever dealt with.”

The surprise to visitors of the home, when it’s completed, will be the absence of visible system details – such as wall thermostats, ducted supply or return vents, bump-outs for ductwork, equipment like pool filtration or heating, and even a large, whole-house generator. All are hidden from view.

“That’s just one of the interesting facets of this home,” Lou Mazzoni said. “We’ve never worked on a project where the homeowner went to such extremes to make these things invisible. But hey – it’s helped us sharpen our skills.”

Throughout the home, braided cables protrude from ceiling-level ducts, or at elaborate trim around windows. The DuroDyne cable-operated volume dampers will terminate at hidden-in-wall sensors tied to the hydronic and HVAC system’s control network.

“All are hidden to eliminate the need for thermostats,” Roberto Mazzoni said. “Think of it: 18 zones and no t-stats.”

Even the home’s main, two-room mechanical space is covertly located, tucked between main living spaces, accessed by what appears to be a simple closet door.

Open the door, and the “invisibility” theme is apparent: systems aren’t to be seen, heard or felt. Thick, foam insulation is combined with further sound-deadening batting. Equipment rests on seismic flotation and sound-isolating supports to assure that what little sound or vibration may come from hydronic flow or geothermal operation won’t escape into living spaces.

And, for extra safety, both adjoining rooms sit on large shower pans —  sloped, waterproof floor surfaces, each with a large drain.

In the first mechanical room is a 299 MBH Weil McLain mod-con boiler, a back-up heat source to the geo heat.

Nearby, is another of the Skidmore glycol injection systems; this one serving the load-side of the 250-gallon geoexchange solution. Next to that is an LG water-to-refrigerant heat pump compressor unit that receives 36,000 geothermal BTUs serving three air handlers – one in each mechanical space, and one in an audio-visual control room.

Beside these is a 120-gallon Lochinvar buffer tank and 90-gallon Taco expansion tank, each serving the load-side of the extensive hydronic system. There’s also a Taco 4900 air separator and pressure gauge, also on the hydronic system’s load side.

Just beyond this space is a larger room where three 10-ton Carrier water-to-water geothermal systems are placed.

Flow for the hidden supply and return lines is governed by three, primary Taco ECM 00e VR20 pumps on each inlet (source side), and three 00e VR15 secondary pumps on the outlet (load) side. This is where the geoexchange field sends or accepts BTUs via flow to and from 11 deep and fully-grouted geothermal boreholes. 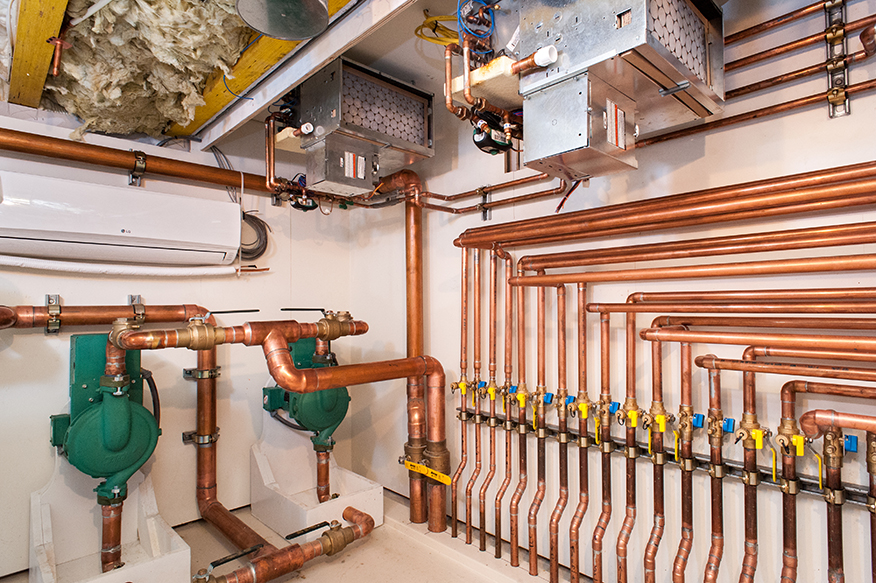 The eye then moves left to right to see big, three-inch copper lines and a pair of Taco horizontal, in-line 1900 VFD (variable frequency drive)-operated pumps. This is the business end of the big, 30-ton geoexchange system. The Delta-T Taco 1900s operate in lead-lag mode, tied to an iWorX pump sequencing module that controls operation. Each of the two geothermal pump’s flow varies based on a pre-set load and temperature Delta-T.

Impressive though this may be, an admirer of mechanical art is quickly drawn further to the right.

To the right of this copper- and pump-rich sculpture are three Taco zone control panels to serve as the interface between the circulator’s line voltage and Taco iWorX building management system. 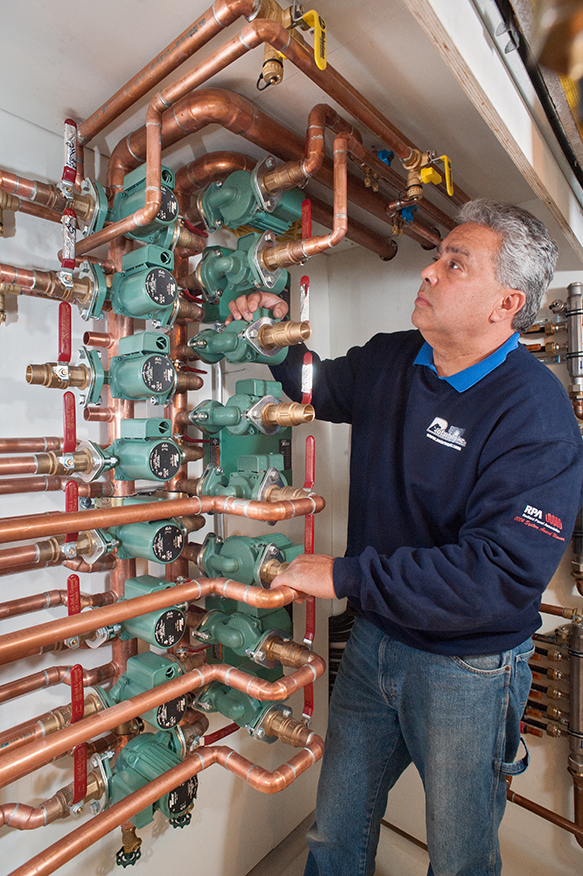 This is Roberto Mazzoni’s masterpiece. Every line is precisely plumbed. Each pipe is spaced exactly on 3-1/2-inch centers. Every circ has iso valves, and there’s not a solder drip to be found.

“This was my solution to losing some space on the jobsite to the electrician, and the home automation pros,” said Roberto. “We were presented with a challenge because they needed some of the space we initially thought was ours to occupy. It all worked out.”

Downstream from this, on the receiving end of outbound warmth are 18 Carrier air handlers, each with flow governed by an energy-sipping Taco Zone Sentry zone valve.

To the right of the zone control panels are the radiant heat manifolds. Nearby, three Taco Radiant Mixing Blocks parcel-out hydronic heat for the floor warming system, with a typical temperature range of between 80 F and 90 F – though at a rare 0 F design temp will mix temps up to 100 F – all depending on ambient temps received from the outdoor reset control.

“A lot of time and attention goes into a job like this, and our field fabrication work has to measure up to real scrutiny. But when I think back to our earlier years and this accomplishment,” Lou Mazzoni concluded while pointing to his sweatshirt’s left sleeve emblem with an RPA logo and the words, ‘2004 Commercial Award Winner” – “I know we’ve come a long way, and we can only look forward to new, more exciting times to come.”

* Today the RPA is known as the Radiant Professionals Alliance