It’s a shame that hydronic systems are not used on every home and project out there — there’s so much flexibility with them.

Not long ago, I completed a radiant panel design for a house on Long Island that looked to be as straightforward as they get. The homeowners were embarking on a full-blown remodel with a couple of bump-out additions. They upgraded to Marvin low-e, double-hung windows; beefier wall and ceiling insulation; air sealing; high-end doors; and Hardie siding. They also added a beautiful wrap-around front porch — which has nothing to do with heating, but it sure will look sweet when completed.

The existing recessed cast-iron wall radiators and a cast-iron boiler will be replaced with radiant floor panels and a modulating-condensing boiler paired with an indirect water heater.

The scope of the radiant design is to install extruded aluminum plates using 1/2-inch oxygen-barrier PEX tubing, 8 inches on center. Most of the floors will be of the hardwood variety, except for the porcelain tile in the bathrooms. Nothing in the design calculation results was unexpected.

I expected a much smaller boiler size and I got it. The 20 BTU/hr/ft2 was in my comfort zone, too, as the plates were to be installed beneath a floor that included a 3/4-inch plywood subfloor and a 3/4-inch hardwood finished floor. The supply water temperature would need to be 125 degrees to get the requisite 20 BTU/hr/ft² and keep us at or below the 80-degree surface temperature required for the hardwood floors.

The bathroom floors will get a few degrees warmer, but I don’t think anyone is going to complain about it. I’m big on minimizing the number of supply water temperatures used in my approach because it makes sense in terms of upfront costs, service costs and the recurring word in this column, simplicity.

The goal is to keep the modulating-condensing boiler operating in condensing mode all winter long, and we’re on target to achieve that. We have two good-sized radiant zones that won’t short-cycle the new boiler to death, and a decent-sized indirect water heater capable of handling the multiple wall- and ceiling-mounted rain showerheads.

Simple, efficient and clean. You’d agree, right? Everything the customer asked for has been provided for, but I wanted to do more — and sometimes more complicates things. In every proposal I submit to a prospective client, the following line is included:

“I approach every job, every system, as if it were my own. You, of course, have the final say.”

Well, I wasn’t going to deviate from that now. I wouldn’t be holding up my end of the bargain if I did, so I suggested an additional improvement. A breezeway between the garage and the kitchen was to be left unheated. It was once part of the garage, but now it will be a cool little segue between the two. Like the existing garage, its floor is a concrete slab.

It includes a service door into the garage, an entrance door into the kitchen and a large French door on each side wall, with a tight attic above. And it’s a whopping 60 square feet. Exposed floor, exposed ceiling, three outside walls — two of them are all glass — and it’s 60 square feet. 60! It’s not a whole lot of space to add a game-changing radiant panel. And by game-changing, I mean something that will actually heat it.

I committed to this upgrade without knowing exactly how to design it, but I would figure it out one way or another. I considered a small radiant wall backing up to the kitchen wall, coupled with a radiant ceiling, but it didn’t come close to covering the heat loss.

Then I thought about staging a radiant panel, with a second stage using a high-temperature heat emitter or a radiator large enough to cover the entire load by itself. The trouble with both ideas is they would move me further away from the intended goal of high efficiency and minimizing short-cycling.

Think about it — a single panel radiator or cast-iron radiator as a separate zone operating at a water temperature higher than the 125 degrees used for the radiant floors. Two things are going to happen: The micro-load zone will short-cycle the boiler, and there’s a good chance it won’t be in condensing mode if it’s the only one calling for heat. Sure, I could drastically oversize the radiator, which would allow for a lower supply water temperature. But this 6-foot by 10-foot room has a good portion of the walls taken up by doors and the fixed glass on the doors.

My clients were excited about the prospect of a comfortable breezeway because of my “great” idea, yet I still wasn’t sure how I would solve this dilemma while maintaining simplicity and efficiency. I let things bounce around in my head for a day or two, confident the solution would come to me. It almost always does at some point, and this time it popped up while watching a Cubs game on TV from our home in Vegas.

I’m not sure how that works, but I remembered seeing a towel warmer being piped in parallel to an indirect tank in an old Viessmann guide — pulling all its heat from the tank and not the boiler. That would be the key. I want the heat to be drawn from the 50 gallons of 140-degree water stored inside the tank rather than 2.5 gallons of water stored in the boiler’s small fire-tube heat exchanger (see Figure 2).

It’s easy enough to plop a chunk of cast iron onto a drawing. Now, it needs to be piped and controlled in such a way that we remain true to our purpose of keeping it simple and efficient. I didn’t find the drawing in the newer Viessmann application guides, but the concept is the same. The breezeway radiator will need its own circulator, pump relay, thermostat, purge port and a couple of well-placed swing check valves.

Take a look at what I drew up in Figure 3, and here’s how it’s going to play out:

1. On a call for heat from the breezeway thermostat, the pump relay bangs on the dedicated circulator for the radiator. That’s it. The boiler pump and the indirect pump will remain off. The relay end switch isn’t used because we don’t want the room thermostat prompting the boiler burner to fire.

2. As water is drawn from the tank, the temperature of the water in the tank drops below its setpoint. The indirect water heater sensor senses it and triggers the boiler burner to fire and ramp up. Its purpose is to heat the tank to satisfy the tank sensor setting. It will continue to do that until the breezeway thermostat is satisfied, shutting down the dedicated pump until the cycle repeats itself.

The beauty in this is that it’s unlikely the burner will shut down and restart before the room thermostat is satisfied because of the stored thermal mass within the tank. 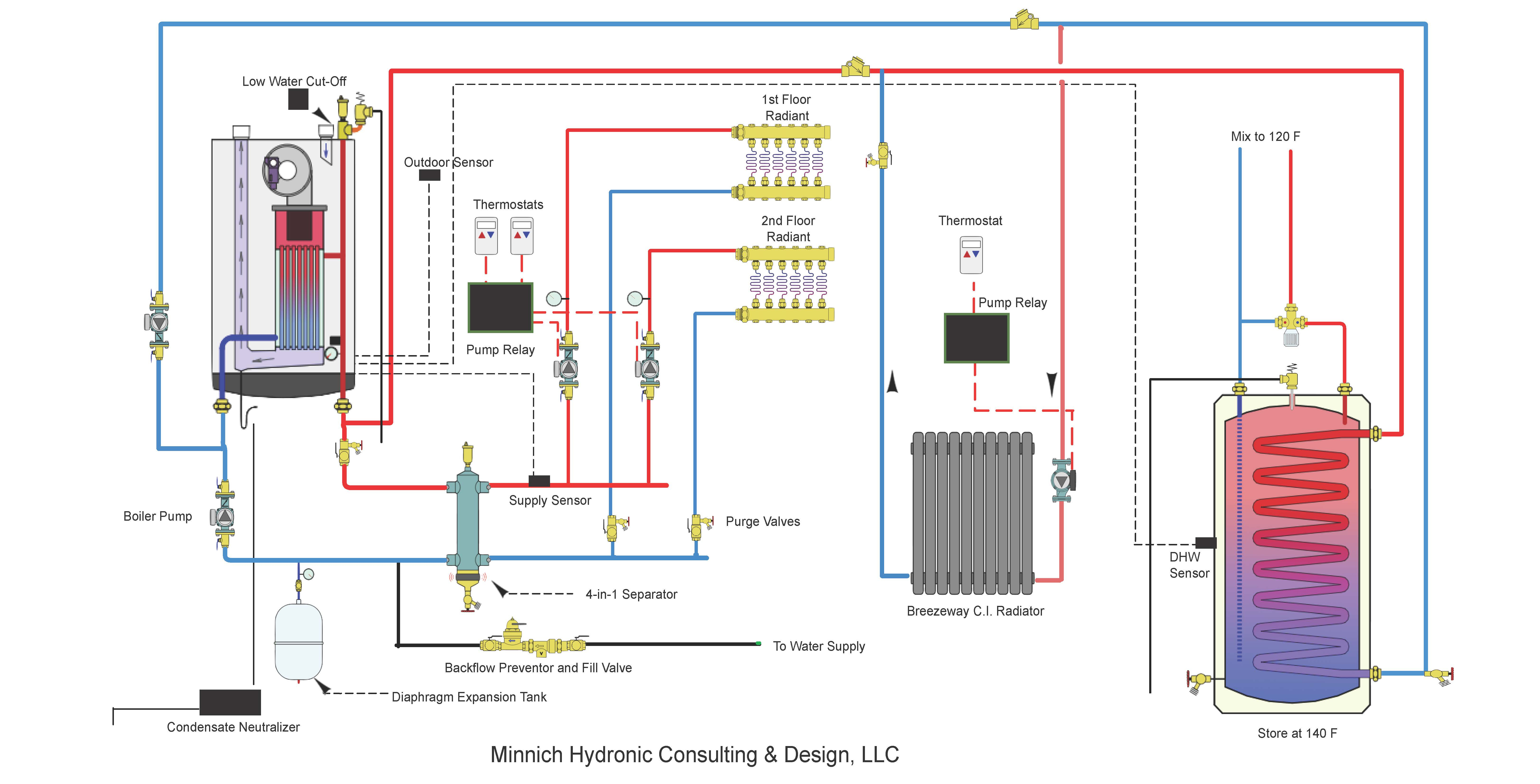 The best way I can explain it is this: If you switch them to what looks like the logical way, the boiler would now be supplying the radiator directly and not the indirect water heater, which is the exact opposite of our goal. Believe me, I tried it on paper. The swing checks are there to help ensure this.

You’ve got to love the simplicity of this. I know I do. German engineering is tough to beat, or so I hear. The indirect water heater serves a dual purpose, acting as a buffer between the small microload zone and the boiler while still providing potable hot water. The efficiency doesn’t suffer, and you won’t add thousands of burner cycles over the years because of a single radiator.

And don’t forget about this option for a towel warmer or two, such as Viessmann’s Application Guide once illustrated. It’s a shame that hydronic systems are not used on every home and project out there — there’s so much flexibility with them.