Christmas came early for University of Pittsburgh quarterback Kenny Pickett last year. On the first Saturday of the month, Pickett accounted for three touchdowns, including a highlight reel 58-yard touchdown run, in a 45-21 victory over Wake Forest. The win earned Pitt its first Atlantic Coast Conference championship and put the team up against Michigan State in the Peach Bowl. Following the victory, Pickett was named the ACC Player of the Year.

Then, on Monday, Pickett was named as a finalist for the Heisman Trophy. And a day later, he won the Johnny Unitas Golden Arm Award.

“There were many who were worthy of this consideration, but there was only one who stood above the rest,” said John Unitas Jr., president of the Johnny Unitas Golden Arm Educational Foundation Inc., said in a video announcing Pickett as the winner. “Throughout this year, you have demonstrated the values for which this award stands both on and off the field, attributes that my dad, Johnny Unitas, would have admired greatly.”

Pickett is the first Pitt player to win the prestigious award, which is presented annually by the foundation and A.O. Smith Corp. to the top upperclassman quarterback in the nation who best exemplifies character, scholastic and athletic achievement. Pickett beat out four other finalists for the honor, including Matt Corral of Ole Miss, Sam Hartman of Wake Forest, Devin Leary of NC State and Desmond Ridder of Cincinnati. 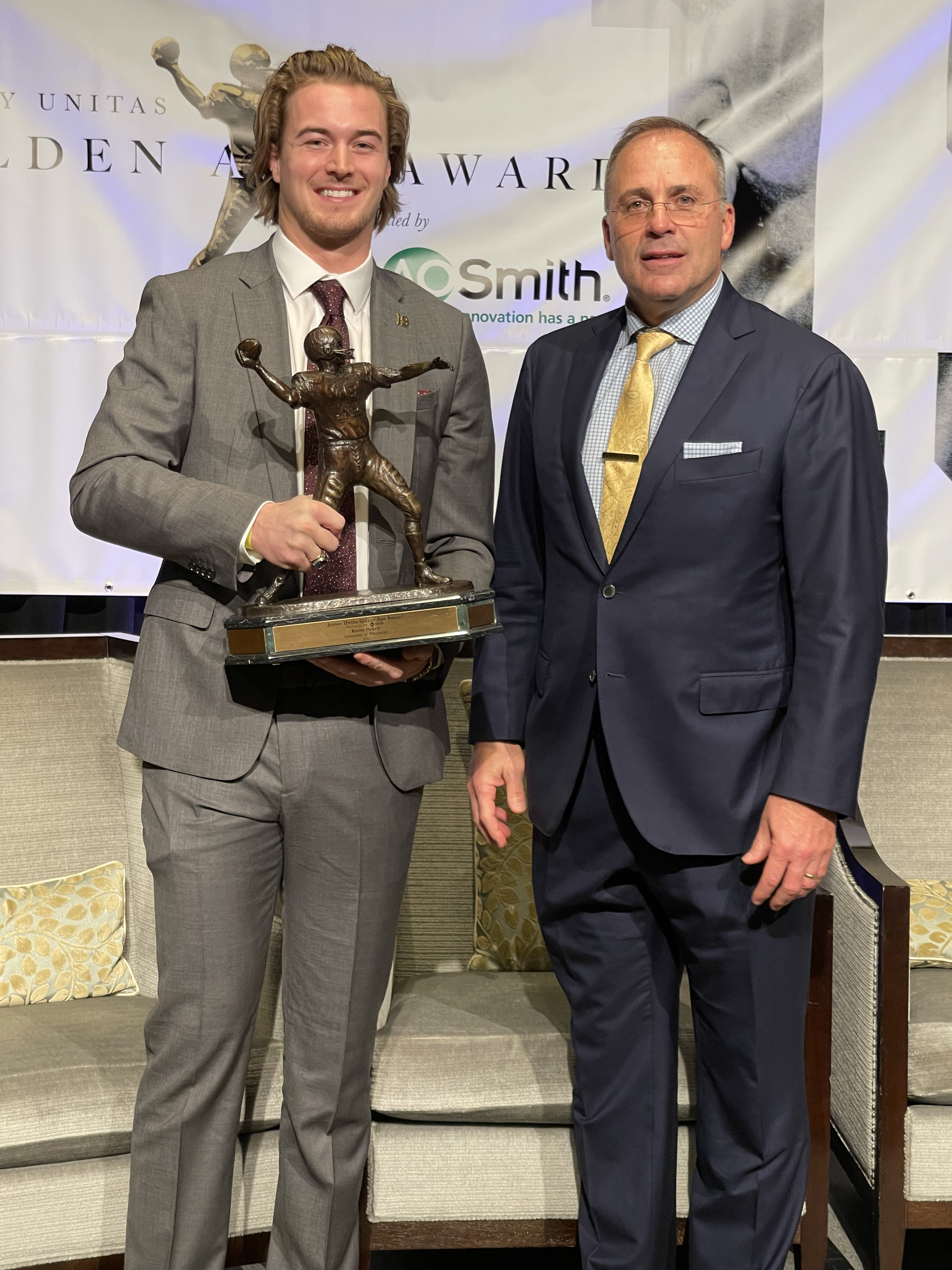 Pickett was honored at the Golden Arm Award banquet and celebration in Baltimore on Dec. 10.

“I know I really want to continue to represent all the qualities that this award embodies,” Pickett said after being presented the award. “Everyone only sees the games, but there’s a lot of time spent off the field building these qualities, and I think that’s helped me more than all the physical training and workouts to be the best person and best leader I can possibly be.”

In addition to his athletic excellence, Pitt’s two-time team captain earned his bachelor’s degree in marketing

“I remember my first touchdown in full pads when I was 7,” Pickett told us hours before the celebration as he signed autographs sitting alongside Unitas Jr. “My parents have been with me every step of the way. And it hasn’t always been winning awards like this one named after an NFL legend; there’s been adversity, too.”

After picking up the Unitas award, Pickett decided to sit out the Peach Bowl in order to begin training for the 2022 NFL draft. (We’re wrapping up this feature in mid-January, and Pickett was planning to play in the Senior Bowl on Feb. 5.) The day after the Baltimore celebration, Pickett finished third in the Heisman Trophy voting behind Alabama quarterback Bryce Young and Michigan defensive end Aidan Hutchinson

From here, Pickett is expected to be a first-round draft pick, maybe even the first quarterback off the board. Each of the last eight winners of the Unitas award have gone on to play in the NFL, and three of those eight have been selected in the first round of the NFL draft, including 2020 winner, Alabama QB Mac Jones, who joined the New England Patriots in the 2021 draft.

“We recruited a gem,” said Pitt coach Pat Narduzzi during the awards celebration. “When you talk about this award, you talk about character and you could not have picked a better young man. If you have a first round draft choice, you’d be really smart to get this young man.”

His other accolades for the year include the following:

“We took a survey of our plumbing and heating community and football was the No. 1 sport they were interested in,” Jeff Storie, director of US marketing for A.O. Smith Corp. told us during the Dec. 10 celebration. “So when the sponsorship became available, it was a great opportunity to support this award and the foundation.”

While there was a limit on attendance for the Baltimore event due to COVID, local manufacturers rep N.H. Yates, based in Hunt Valley, Maryland, was in the crowd along with area contractors and wholesalers that do business with the agency.

This also marked the first year that A.O. Smith organized a live stream of the award’s presentation on its Facebook page. Storie added that the presentation would be shared with about 23,000 PHCPPros, including 18,000 contractors and 5,000 wholesalers. (You can watch an archive of the presentation here: bit.ly/3K3mICH.)

Johnny Unitas, the namesake of the Golden Arm Award, was an 18-year veteran of the NFL, who played his collegiate career at the University of Louisville before joining the Baltimore Colts in 1958. His career passing figures include 2,830 pass completions for 40,239 yards, 290 touchdowns and throwing a touchdown pass in 47 consecutive games.

In addition to honoring a player with the Golden Arm Award, the Johnny Unitas Golden Arm Educational Foundation, Inc., has awarded more than $750,000 in scholarships to deserving scholar-athletes from local area high schools both in Maryland and Kentucky.

A complete list of all the winners for the Golden Arm Award can be viewed here: bit.ly/3tmXVne.