Industrial manufacturing appears to be in relatively good health, with recent gains in output, capacity utilization and a general sense of optimism.

After dropping for the second year in a row, spending on U.S. and Canadian projects that include pipe, valves and fittings (PVF) is finally set to rise in 2022, according to Industrial Info Resources’ (IIR) PVF forecast.

Industrial spending on projects involving PVF hit a multiyear high in 2019 at $17 billion but dropped sharply to $15.3 billion in 2020 as the economic consequences of the COVID-19 pandemic hit various industries. Spending slipped a little more in 2021 to $15.2 billion.

For 2022, project spending is forecast to rise to $15.9 billion in North America as industries recover from the effects of the pandemic (see Figure 1). It’s worth noting that the impact of COVID-19’s Omicron variant is unknown. 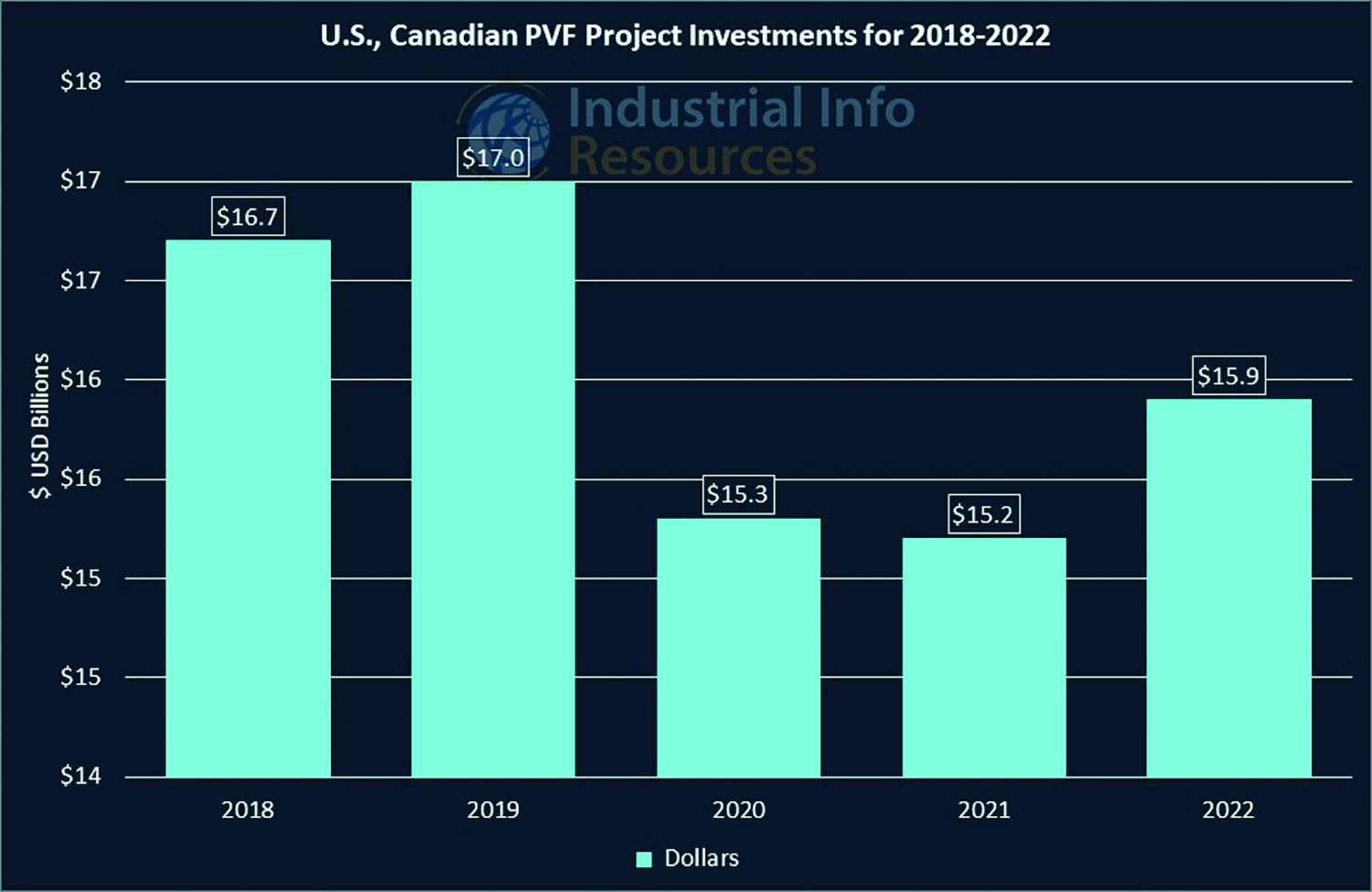 As of early January, Industrial Info was tracking a total of about 32,000 active U.S. and Canadian projects across 12 industries that listed pipe, valves and fittings among their key equipment needs. These projects are in various stages of development (see Figure 2).

By industry, industrial manufacturing, which covers a wide range of sectors, led in spending, followed by power, oil and gas, and metals and minerals. 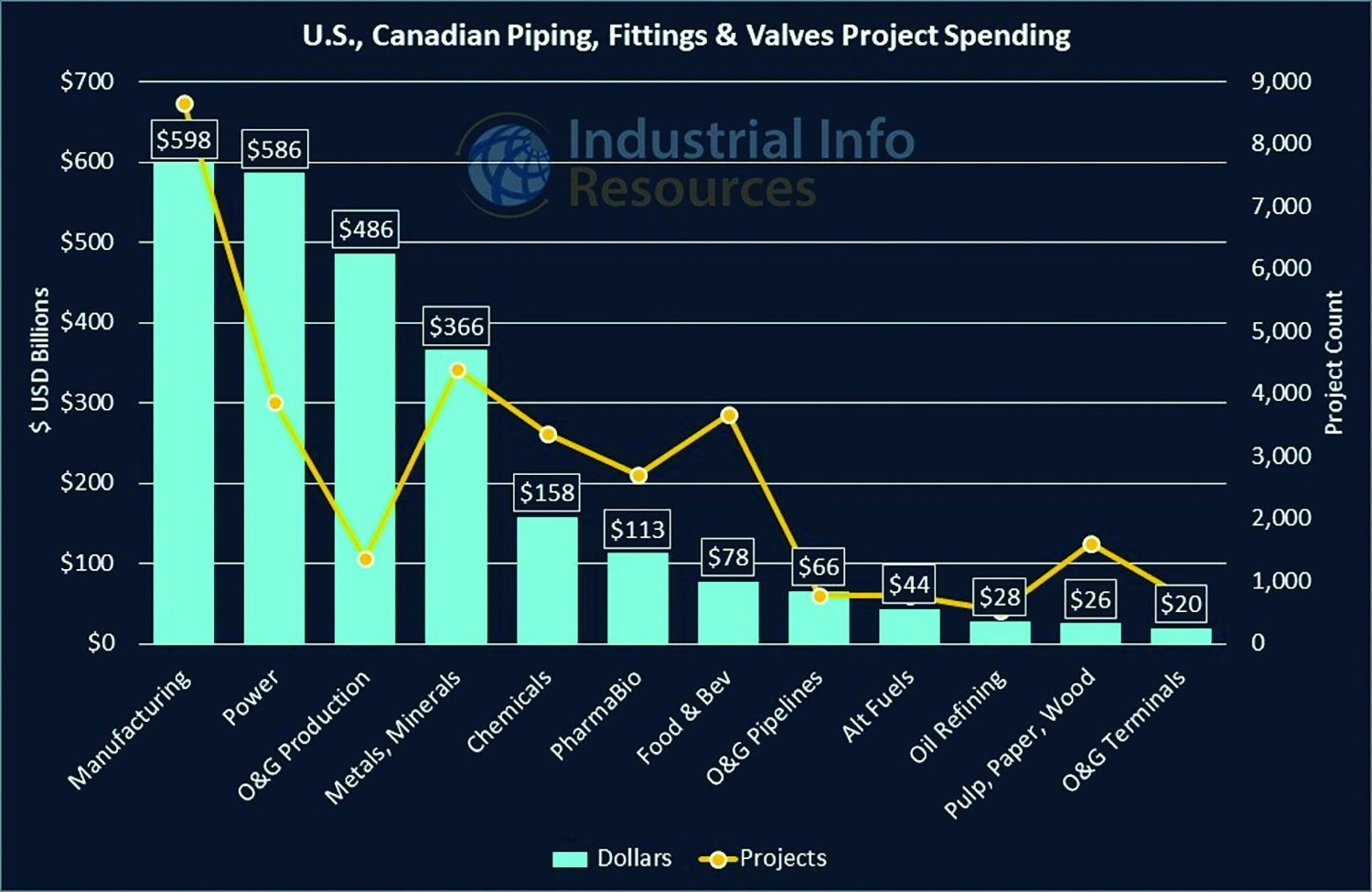 The industrial manufacturing industry includes sectors such as public transportation, airports, auto production, data centers, distribution and warehousing, and semiconductors and computers, among many others.

Despite concerns about the impact of the Omicron variant, labor shortages, supply-chain issues and inflation, the industrial manufacturing industry appears to be in relatively good health, with recent gains in output, capacity utilization and a general sense of optimism, according to various reports.

Manufacturing companies continue to indicate a hopeful outlook, albeit at a slightly muted level, reports the National Association of Manufacturers’ fourth-quarter 2021 outlook survey. It found that 86.8 percent of the respondents felt either somewhat or very positive about their company’s outlook, down from 87.5 percent in the third quarter.

Survey respondents also expected capital spending to rise 3.3 percent in 2022, down from expectations of 3.6 percent growth in the previous quarterly survey, the association said.

U.S. gross domestic product (GDP) reached pre-pandemic levels in the second quarter of 2021, which will provide some cushion to current supply-chain issues. The Omicron variant of COVID-19 will put some constraints into growth projections. Still, its impact is expected to ease in response to rising vaccination rates, more effective treatments and businesses adapting to the new market environment.

Nevertheless, S&P Platts has lowered its U.S. GDP forecast for this year to 3.9 percent from 4.1 percent, citing ongoing supply-chain disruptions as an impediment to growth. Supply-chain issues have been declining, but it could be the middle of 2022 before the situation returns to normal.

The Canadian economy also has experienced a strong rebound.

In the automotive sector, the Biden administration is aiming for half of all new vehicles sold by 2030 to be electric-powered as part of the energy transition. Some auto executives see this goal as achievable; however, General Motors and Ford have only committed to between 40 percent and 50 percent of the automobiles sold by 2030 as being electric, including plug-in hybrids.

For 2022, analysts project U.S. vehicle sales will remain below the 2015-19 average, but the resolution of supply-chain issues could improve the scenario. On the other hand, the ongoing semiconductor shortage will likely impede auto production.

The semiconductors and computers sector is one of the hottest in the industry. The global semiconductor shortage has boosted planned project spending in the sector; a big chunk of the activity is earmarked for North America.

The power industry is also forecast to see many PVF-related project activity.

Rising natural gas prices in 2021 led to an increase in the use of coal to feed power plants. However, the increase is seen as a temporary blip as coal-fired generation capacity continues to decline and solar and wind power are built out. Natural gas-fired generation capacity remains the go-to option for baseload power and plays an important role as the bridge fuel to shore up renewable power targets.

Between 2022 and 2025, almost 28 gigawatts of new natural gas-fired capacity is scheduled to come online in the United States. Still, the U.S. Energy Information Administration (EIA) forecasts the share of U.S. electricity generation produced by natural gas will average 35 percent in 2022, down from 37 percent in 2021 and 39 percent in 2020.

This is a result of higher gas prices and renewable power generation’s growing share in the energy mix.

Nuclear power still makes up a sizeable portion of the U.S. electricity mix, but its share has not expanded due to a near halt in new-build activity over the last 20 years. Many operators have struggled to compete with cheaper gas-fired capacity and the tax-advantaged renewables market.

As a result, operators have continued to shut down their plants, many well in advance of their operating license expirations. The EIA forecasts the share of electricity produced by nuclear power will be 20 percent in 2022, which is flat with 2021 and a decline from 21 percent in 2020.

Also, U.S. producers have been somewhat reluctant to restore output to previous levels as the Biden administration has threatened the oil and gas industry with an array of taxes and regulations.

Canadian oil producers seem to have adapted better to lower prices and a less volatile pricing environment than their U.S. counterparts, but capital expenditures on additional oil sands production are not expected to increase significantly.

Oil and gas producers in the Gulf of Mexico greenlighted more projects in 2021. A trend toward more offshore production investment is expected as some producers look to longer-term and consistent payout projects.

As of January, IIR was tracking more than $266 billion worth of U.S. and Canadian LNG production projects in various stages of development.

Oil and gas pipeline investments have retreated from the highs seen in the previous decade. The connections from the major production centers to key demand centers have mostly been built out, and the era of building new 1,000-mile crude oil and natural gas pipelines across the country is in the past.

In the metals and minerals industry, high metals prices, coupled with a positive long-term demand outlook, are resulting in improved health for many mining companies. Cost management and a focus on cash flow remain priorities, with an emphasis on in-plant capital projects that replace old legacy equipment and increase automated mining.

The drive to decarbonize is accelerating, with most major mining, smelting and cement companies focusing on environmental social and governance (ESG) programs, vowing to cut carbon emissions significantly by 2050. Where possible, fossil fuels are being replaced by renewables, including power-to-X, hydrogen, electricity, battery storage and hybrid systems. One example is the mining sector’s conversion of diesel haul trucks at mines to electric-battery-powered vehicles.

The energy transition also drives demand for battery metals such as lithium, cobalt and nickel. With grassroot mine development attracting more social and regulatory scrutiny, there are delays in bringing new capacity online. Soaring prices for cobalt and lithium could extend into the next decade, notes the International Monetary Fund.

On the metals side of the picture, the steel industry has undergone significant transformation and consolidation over the last few years. U.S. steel manufacturers have benefited from a tripling of prices since early 2019. Many steelmakers have been operating at more than 90 percent utilization rates and are ramping up production capacity.

Most cement industry leaders predict a worldwide construction supercycle that could last for four or five years, driven by various government-led fiscal and infrastructure spending programs. This could lift cement demand by 20 percent to 30 percent. Currently, U.S. production can handle demand but, in the future, the industry will need to invest in additional capacity.