More engineers are turning to water softener alternatives such as physical water conditioners to attack scale in hydronic equipment.

The increasing use of multiple tankless water heaters, especially in commercial applications, highlights the problems of scaling caused by hard water. Traditional tank heaters are very good at disguising the problem for a number of years before suddenly failing. Boilers with suitably sized pumps are very resistant to scale, but tankless units are a different matter.

Some design features of tankless heaters actually encourage scale formation. For example, heat transfer is sometimes enhanced by turbulent water flow created by spiral wires inside heating tubes. However, this also stimulates scale formation due to the pressure reduction in the turbulent flow (Figure 1). The payoff for better heat transfer is often set back by increased scale and loss of heating efficiency.

The need to control scale in heaters is highlighted in the 2021 Uniform Plumbing Code, which sets out in Appendix L:

“Where water has a hardness equal to or exceeding 10 grains (170 mg/l) measured as total calcium carbonate equivalent, the water supply line to water heating equipment and the circuit of boilers shall be softened or treated to prevent accumulation of lime scale and consequent reduction in energy efficiency.”

Those last four words highlight the main issue for tankless heaters. Scale is 400 times less conductive of heat than copper and 65 times less than stainless steel. An oft-quoted statistic is 1/8 inch of scale can equal a 12 percent loss in heating efficiency. This means that all the extra money you are paying for high-efficiency condensing boilers can be thrown away by scale.

So, what to do? Conventional wisdom is to soften the water with an ion-exchange softener but, in many cases, the cost, the space, the inconvenience of servicing with salt and the environmental impact of chloride-contaminated wastewater makes this decision a hard one to make.

More engineers are turning to softener alternatives — physical water conditioners (PWCs) — but can they be relied on? What is the evidence for their performance? 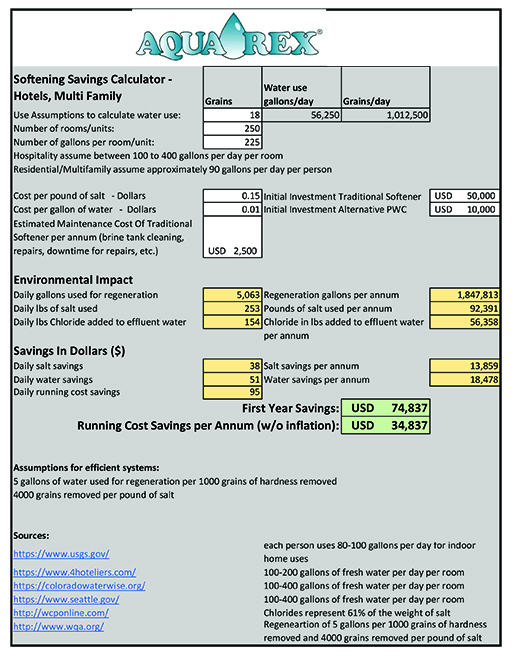 PWCs generate nucleation seeds in the water onto which the scale forms in suspension rather than forming on the surfaces of heaters or piping. They fall broadly into three categories: those that dose zinc into the water, those that seed the water with scale crystals and those that convert iron molecules into nucleation seeds.

Zinc-dosing with electrolysis can be highly effective, but it is time-limited due to the tendency for passivity to occur, reducing access to the zinc anode. These systems can be highly effective in the short term but performance invariably falls off over time. After a couple of years, there is frequently little effect unless the anode is cleaned or replaced.

Scale crystals can be generated directly by a seed-generating media (SGM), similar to a softener media, as well as by cathodic seed generators. Both of these processes are subject to contamination: SGM from phosphates, chlorides, iron and other minerals, while cathodic systems can clog up with the seeding material. Both need periodic maintenance and SGM requires media to be replaced.

Electronic systems, sometimes referred to as electromagnetic systems, generally act on iron ions in solution in the water, converting them to a form at which they become effective nucleation seeds. These devices can be intrusive, requiring to be plumbed in; others are applied externally to the pipework. All require an electrical supply, but the draw is minimal in many cases — just a couple of watts.

The main concern is that the iron molecule can revert to its previous form when the treatment is withdrawn or the processed water passes through a pump. This means that multiple units may need to be deployed tactically around the property rather than a single unit on the water inlet. Careful study of the manufacturer’s specifier guide is an essential part of the specification process.

The other important issue is the need for iron in the water for the process to work effectively. Frequently, a water quality report will show iron as Fe with the notation ND. This means “Not Detected,” but it doesn’t mean that iron is not present.

Detecting iron in the water below 50 parts per billion (ppb) is an expensive exercise, so while the EPA guidelines set an upper limit of 300 ppb, water companies very seldom test below 50 ppb. The level at which performance falls off is probably less than 10 ppb; it is rare for this level to be reached.

Parts of West Texas around Lubbock have zero iron in the groundwater; otherwise, such levels are only found in water provided from reverse osmosis systems such as the Chino Desalter and the Orange County Ground Water Replenishment scheme in California. In most cases where desalters are used, the output water is normally mixed with regular groundwater.

Until recently, there has been no independent third-party test protocol to evaluate the performance of PWCs. In 2017, the International Association of Plumbing and Mechanical Officials published its IGC 335 Rapid Scaling Test (RST). It is based on a test protocol widely used in the United Kingdom for several years and more recently adopted by NSF International in one of its standards.

The RST is quick, simple and accurate in measuring the performance of devices in a range of water qualities; it also has the merit of being inexpensive. In June 2018, IAPMO published ANSI Standard Z601, a considerably more expensive and complex protocol, which had been through a very long process of gestation and a very difficult delivery and birth. It is now generally recognized as being premature and has gone back into intensive care for major surgery.

When evaluating whether to install a water treatment system, either conventional or a PWC, it is important to look at the financial and environmental cost of both alternatives. Recently, PWC manufacturer Aqua-Rex published a costing tool; download a copy from www.aqua-rex.com.

The calculator is an interactive spreadsheet where engineers can insert their own variables for specific projects. The example in Figure 2 shows a first-year savings of nearly $75,000 and annual savings of $35,000 before the amortization of the equipment. Typically, the life of a softener is less than 10 years, while some PWCs have warranties of 20 years.

Historically, there has only been one costly option to treat hard water and the tendency has often been to ignore the problem and hope there is no need to deal with it later on in the life of a project. PWCs now provide an alternative that is not costly and has no environmental drawbacks.

A case study where Aqua-Rex replaced conventional softeners in a large luxury condominium in Las Vegas showed a savings of $500,000 over three years for the investment of $55,000 in the alternative equipment.

The Water Quality Association now accepts that some PWCs can also provide softened hot water. Additionally, all the scale on showerheads, faucets and countertops caused by the previously unsoftened hot water disappeared once the PWC was installed on both hot and cold services.

Jonny Seccombe studied geography and geology at Oxford University and has worked in the water treatment industry investigating the performance of physical water conditioners over the last 27 years. He is president and owner of Aqua-Rex LLC, the U.S. distributor of Aqua-Rex softener alternatives. Seccombe has collaborated with Oxford University in investigating PWCs for the last 19 years. He is an ASPE-certified CPD provider on the subject of physical water conditioners.