The hunt for cool air started in April and led to frustration before leaning on some industry friends.

My plans were set. It was still the night before, but I was already getting excited about it. It had been at least a year since I’d been in a venue like this. A full year in Las Vegas, and I had yet to walk into one of these majestic houses. I had a set limit of what I was going to spend and intended to walk out without losing a dime of it. I answered to a higher power when I got home, and I didn’t want to be on the wrong side of that conversation.

I knew it would be different than similar places I frequented in Chicago. Back there, I was like the chunky guy at the end of the bar where everyone knew my name. Nobody would know me here, but I was OK with that. I was just happy to be at the table again. You miss that game when it’s been part of your life for so long and then it isn’t.

Laying out the clothes I was going to wear, I needed to make sure I looked as if I belonged because I did. This is me. I was born for this. As I got closer, I could see the Bellagio, MGM Grand and the Venetian towering into the sky. It was about to happen.

I pulled into the lot and walked toward the doors trying, as best I could, to hide the fact that it felt as if it was my very first time. Dress the part. Look the part. Fake it until you make it, they say.

I was home. This is my house — the supply house. This is where I belong, back in the game for at least a moment or two. If you thought I would roll the dice in a game of chance when I could be spending it on HVAC swag, we need to get to know each other better.

A little help from my friends

My wife and I now live 15 to 20 minutes north of the strip, and it starts to get hot in March here and doesn’t let up until November. I learned the hard way last summer; it’s best to stay in conditioned spaces from June to September. It was regularly more than 110 degrees and my garage/shop often hit triple digits. I lost 30 pounds that I didn’t need to lose.

I tried a swamp cooler but if I wasn’t right in front of it, it wasn’t helping me. I needed frosty cool air conditioning that would allow me to hang meat in the room if I wanted to. I did a quick load calculation, decided to go with a ductless mini-split air conditioner, made a material list, planned everything out, and started checking into how I was going to get the equipment.

This is where things got extremely difficult and frustrating for me. I had it made in Chicago, open accounts at supply houses at every turn. I’d place my order, have them get it ready, go to Will Call to pick it up, and I’m off and running. Clean, smooth and efficient, like a properly charged air-conditioning system. But not here.

I wasn’t a licensed Las Vegas contractor, and I wasn’t about to jump through all the hoops necessary to become one just to install an air conditioner in my own home. And there was zero chance I’d pay someone else to do it. The electrical license I’ve had since 1987 didn’t matter, nor did the EPA-approved, ARI-certified, universal refrigerant certificate I’ve had since 1996.

It didn’t even matter that I had a legitimate business in this chosen field, an industry I’ve been knee-deep in for a long, long time. Ugh! Maybe it was hubris that made me think they’d sell to me with no further requirements. My dad always told me not to get cocky; I’m guessing he did it because maybe, just maybe, I did at times.

Luckily for me, though, I have friends and acquaintances in the industry. This time I turned to my brothers in arms on Instagram, an enthusiastic bunch of people building each other up and helping each other out in the trades. It’s the only form of social media that isn’t toxic, in my opinion. Because of them and one guy in particular, I got what I needed (Figure 2). Thank you! 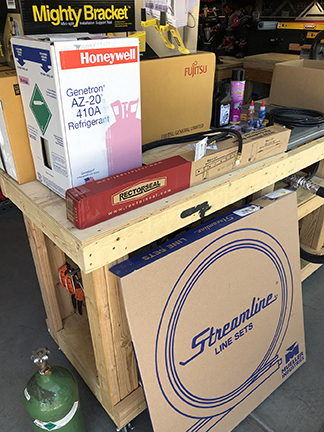 Rules may have been bent a little, but it’s not as if I’m unqualified. I was installing two full air-conditioning systems a day, solo, back in the ’80s. Now, I’d be lucky if I could install one system a week. I’ve slowed down a little bit, but not by choice.

The shop air conditioning was way down on the list of house projects when we moved into this place in January. Priorities, right? When we started getting 90 F temperatures in April, the air conditioning became the No. 1 priority. Ninety degrees in April? Are you kidding me? It was still snowing in Chicago this past April.

I spend a lot of time in my mini shop, and I need to be comfortable and safe while doing so. More than 100 F is not safe for me. I have trouble breathing in 70-degree weather. I turned the new air conditioning on yesterday for the first time; it was glorious! It pulled the temperature down 6 degrees in the first hour. I don’t need to worry about moisture removal here because there isn’t any humidity. In the first hour of operation, not a single drop of condensation came out of the drain line.

The 1-ton, 22 SEER, Fujitsu heat pump with inverter compressor technology installation went smooth as silk. I already installed a 60-amp electrical sub-panel in the shop and ran the 220-volt line for the conditioning system earlier in the year. The indoor unit (Figure 3) hangs above my Lochinvar boiler and a 12-foot refrigerant line set connects it to the outdoor unit (Figure 4), which is suspended from the exterior wall about 12 feet above the ground. 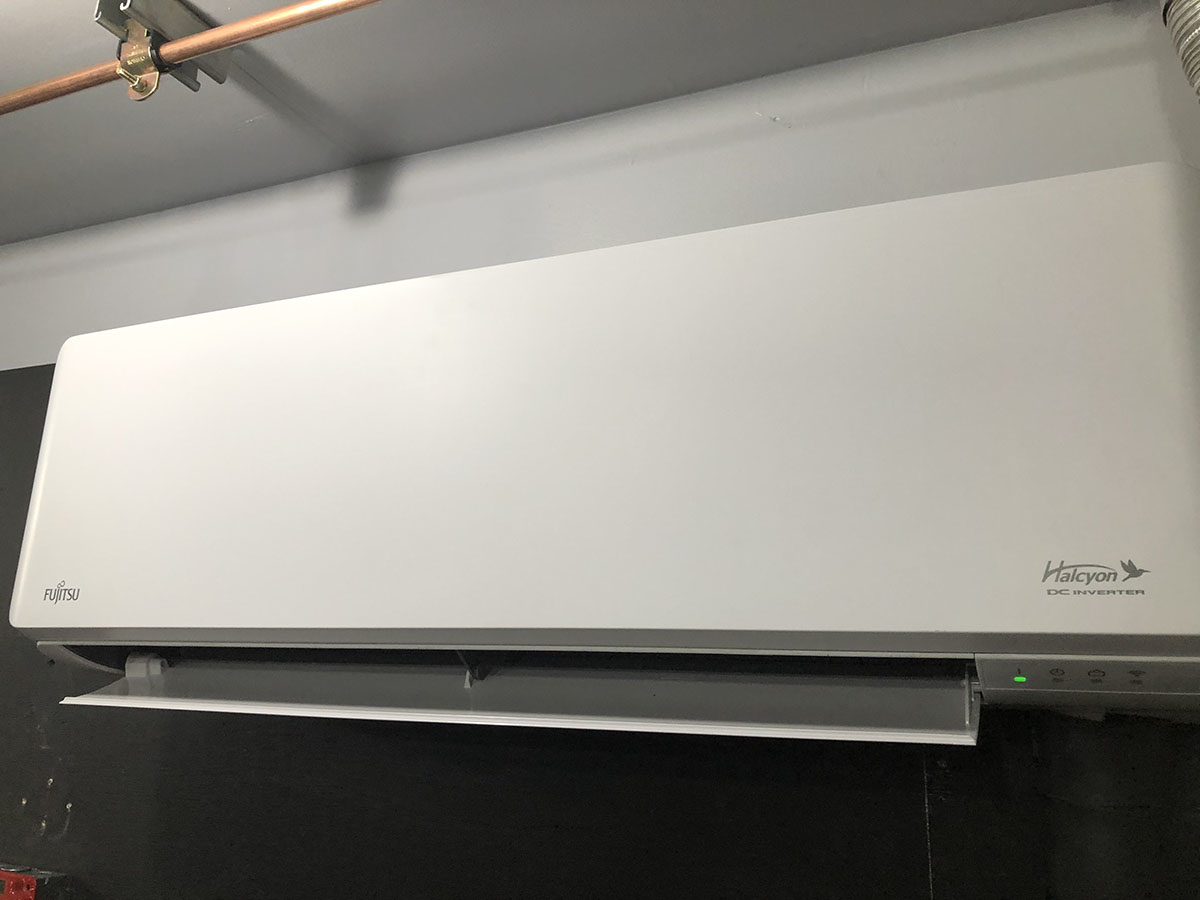 This was the single thing on the list I was really looking forward to. Replacing light fixtures, exhaust fans, ceiling fans, deadbolts and door locks, painting and the like are too mundane for me. Before long, I’ll be upgrading our two 21-year-old main HVAC systems and finishing my tricked-out hydronic system. 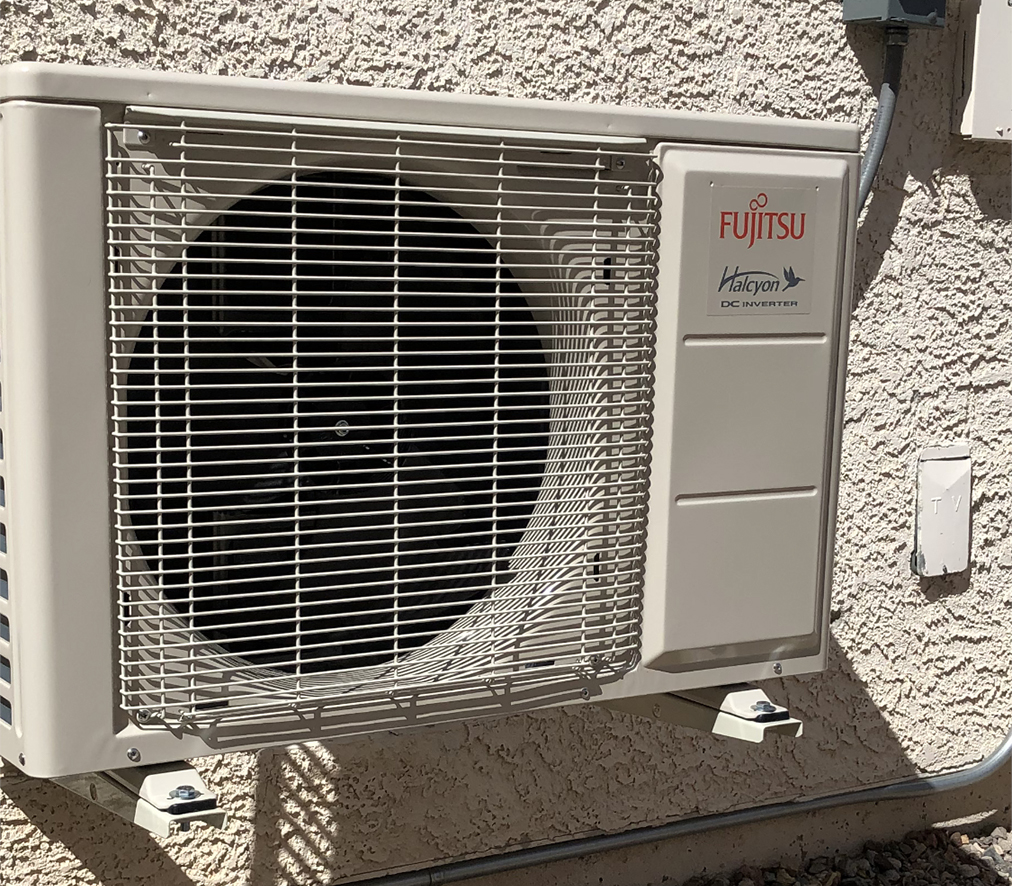 These are all fun things for me and more reasons/excuses to return to supply houses. I miss the camaraderie. I miss the fact that it always felt like a much-needed break in a hectic day and the likely odds I’d walk out with a new tool.

Truth is, I’m not much of a gambler. Deeper truth — I don’t gamble at all. Nobody will ever confuse me with Rounders’ Teddy KGB or Worm. I work hard for my money, and I don’t see the logic in laying it on a table knowing full well I’m likely going to lose it. I tried it but it did not appeal to me. None. Zip. Nada.

I’d rather put my money on a supply house counter than a craps table. The house always wins. That house, anyway. At supply houses, it’s a safe bet that both sides get exactly what they want. For me, it was an incredible feel-good experience to be back in the game again, if only for a little while.