At 9,600 feet above sea level and only 75 miles from Denver, Breckenridge, Colorado, provides some of the best skiing in the US.

At 9,600 feet above sea level and only 75 miles from Denver, Breckenridge, Colorado, provides some of the best skiing in the US. The cool climate also means that most homes – even the big ones, and there are plenty of those – aren’t air-conditioned.

The town’s official population is 5,000, but the true number of occupants swells considerably during ski season. A great number of the properties are vacation homes. Without a permanent population that correlates with the amount of property in the area, a number of services can tend to be in short order, especially the skilled trades.

“The first time the building inspector in Breckenridge saw some of my work, he began propositioning me to set up shop here,” says Mike Holmes, owner of Holmes Heating & Air.

Holmes’ shop is in Denver, about 80 miles away from Breckinridge so this was the first time he’d done work in what the locals simply refer to as “Breck.”

In addition to providing his qualifications, Holmes had to pay a $50 business license fee in order to work in Breckenridge.

Eventually, a referral in August of 2020 put Holmes in touch with Dave Farrell, at FMJ Custom Build LLC, Frisco, Colorado. The six-person general contracting firm has operated in Colorado for more than two decades, building livable custom homes and remodels with modern mountain design and finishes.

Farrell asked Holmes to bid on the hydronic system for a big home his company was building at the time, a unique residence with million dollar views. Before submitting his bid, Holmes visited the site three times to make sure his numbers were accurate. He was hired for the job and soon set out to complete a radiant system at the custom, 8,600 square-foot home perched high above a golf course. 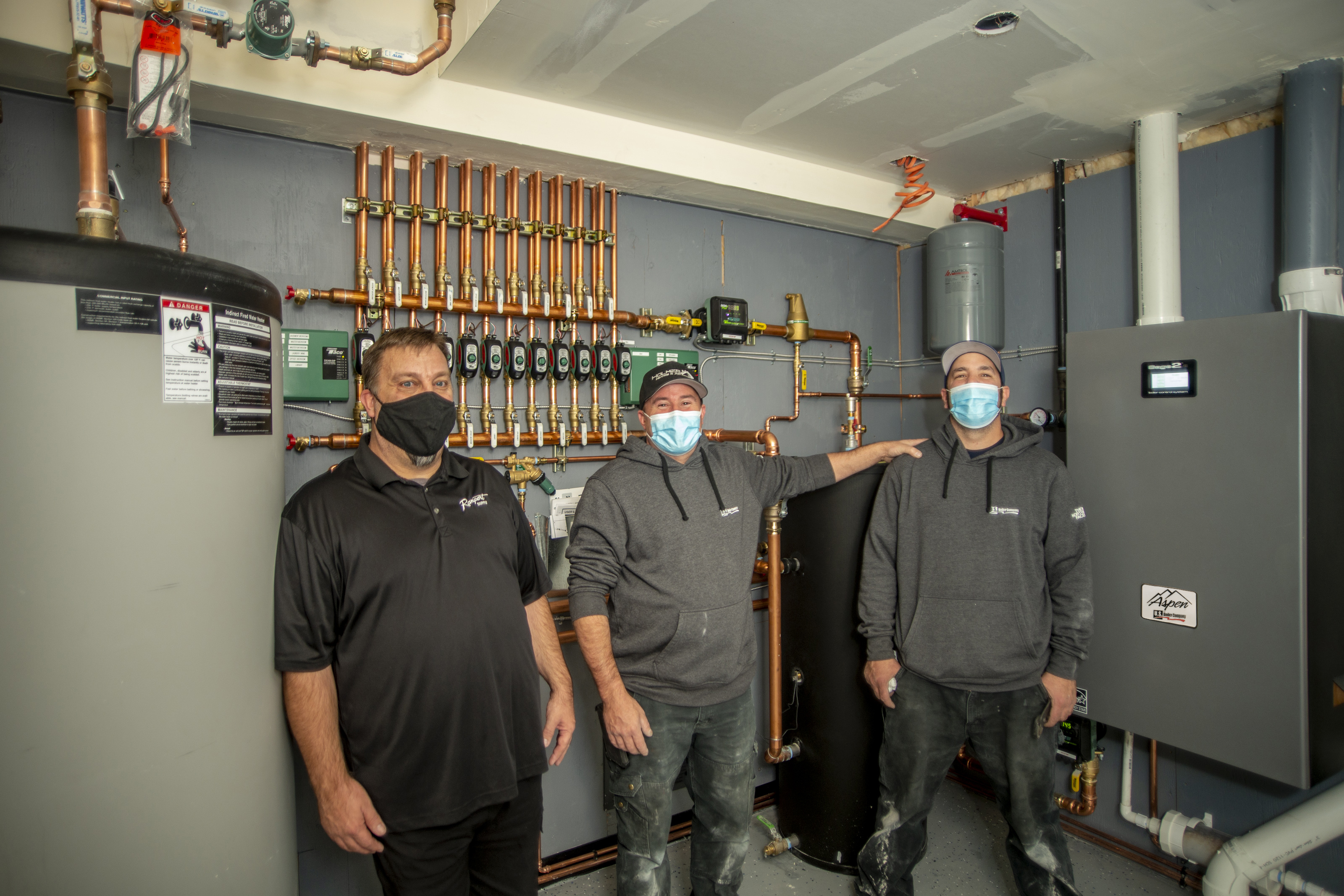 We need to emphasize the word “complete” since another contractor had already started work on the heating system before moving out of the area. When Holmes arrived, he found various hydronic components in the mechanical room, some radiant tubing already laid out and two ERV systems that weren’t installed properly.

This is the part where I come in; throughout the entire process, Holmes leaned on me and the rest of us at Rampart Supply,  a supply house based in Pueblo, Colorado, which was started in 1968 with three employees and has grown into a business with three branches, more than 250 employees and more than 500,000 square feet of stocked shelves.

As soon as Holmes had a signed contract, he hired several other tradesmen to join him and his brother to tackle the project while living out of a Breckenridge hotel. Because the project was already behind schedule when they took it over, Holmes and his crew completed a month’s worth of work in two weeks.

The race was on to get the heat running, given that drywall work couldn’t begin until the house was warm. Like the majority of upper-echelon vacation homes in ski towns, the heating system consists entirely of in-floor radiant.  Premium comfort and ultra-high efficiency appeal to environmentally minded vacationers.

The mechanical room was already stocked with a 399 MBH Aspen fire tube boiler made by U.S. Boiler Co. Plenty of PEX, both in coils and already installed, was onsite. Holmes continued laying the ½-inch Uponor PEX using a layout he created with me.

“The existing PEX had been stapled down between sleepers,” Holmes says. “I prefer a panel system, but this works, and it gave us the flexibility to modify our tube spacing throughout the floorplan without specifying a variety of panel components.”

Most of the PEX was laid 9 inches on center, though a few areas of concern were tighter than that. The master bedroom, for example, has a tongue-and-groove platform on which the bed rests. Here, and in tiled areas with northern exposure, tubing was installed on 6-inch centers. In all, the home has 11 zones of heat, with a 12th installed, but not yet operational.

“There is no distinct first, second or third floor in this home,” Holmes adds. “The levels of the house are all chopped up and fragmented with oddly-shaped rooms. This created a bunch of small zones and piping challenges to deal with.  Open, vaulted ceilings made it more difficult to run supply and return lines, too.”

Instead of asking Holmes to attempt fishing eight, ¾-inch lines through all variety of LVL and TJI joists, FMJ built a soffit for concealment. Uponor manifolds were installed throughout the home, typically in a wall with an access panel.

The mechanical room was more straightforward than the rest of the home. A decent sized area was set aside solely for the boiler, indirect-fired water heater, buffer tank, pumps and valves.

Given the space to get creative, Holmes and I had the freedom to specify anything they wanted, save the boiler.

“The Aspen condensing boiler was already here,” Holmes adds. “It’s the boiler I would have selected anyway, but in a house this size, I’d likely have used two smaller models instead of one big one, just for more flexibility in firing rate.  That said, with a 10:1 turndown and the use of a buffer tank, we still provide plenty of flexibility.” 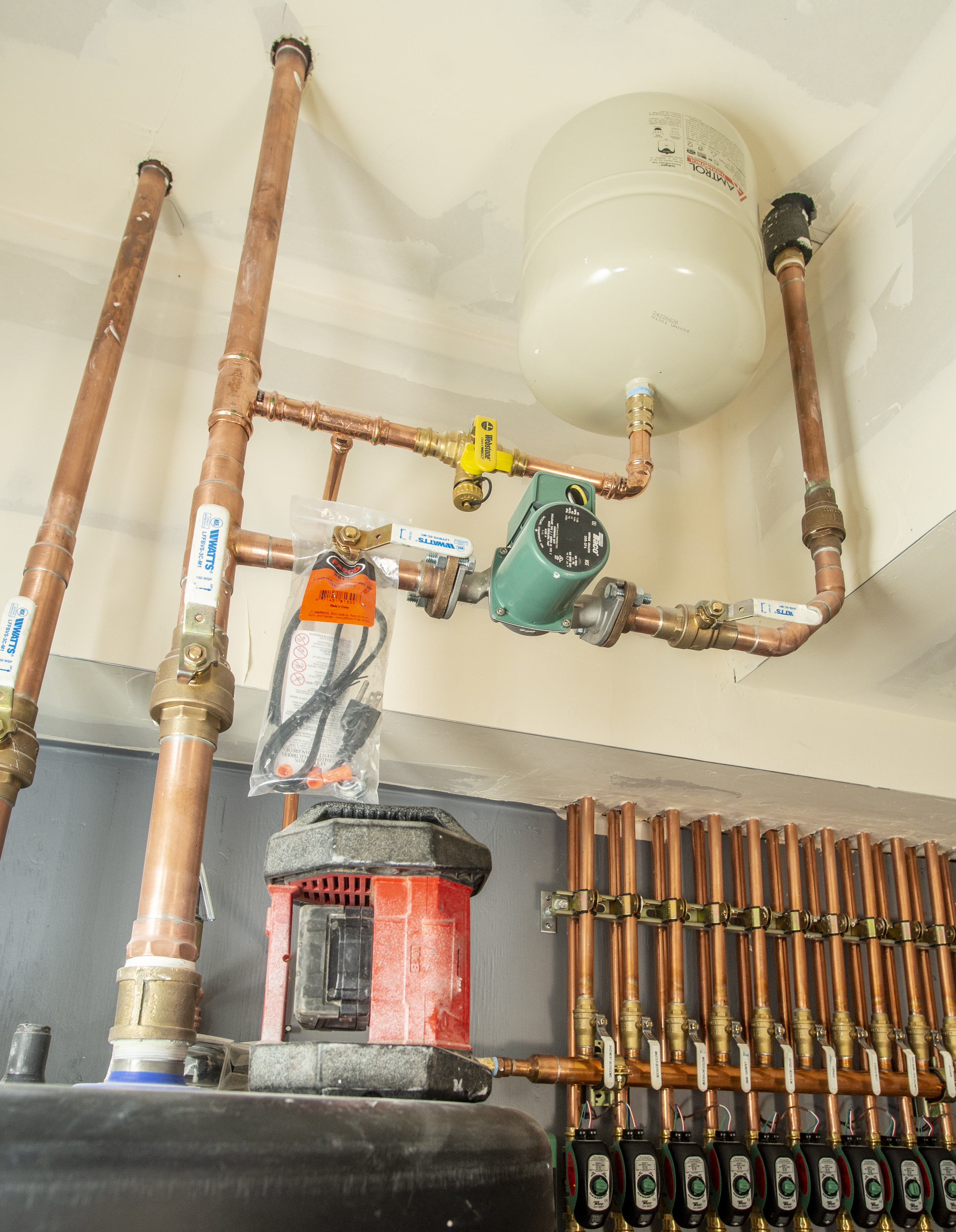 The boiler loop and the system loop are both circulated by Taco Comfort Solution 0034ePlus high efficiency pumps. Holmes and Kingery selected the circulators for efficiency and ease of setup. The 0034ePlus differs from Taco’s 0034e with more constant and proportional pressure settings and a digital display for real-time feedback.

“We mounted one of the pumps horizontally and one vertically,” Holmes explains. “We rotated the control box on the vertical pump for ease of use and appearance. Tyler was instrumental in helping me design the piping schematic for the house.”

For domestic hot water, a 110-gallon indirect tank was installed off the boiler, and the plumber connected a stainless steel hot water recirculation pump equipped with Taco’s SmartPlug DHW recirculation control, which “learns” the hot water use patterns of the home.

“Instead of installing a mixing valve, I used a 40-gallon buffer tank, which we maintain at 125 degrees,” Holmes explains. “The boiler modulates via the outdoor reset, with an outdoor design temp of zero degrees.”

Condensate neutralization is provided by a Neutra-Safe tube-style neutralizer, which is available in six sizes to handle condensate disposal for condensing appliances from 220 MBH to 2 MMBH.

Typically, the neutralizer is mounted to the floor, but given that the concrete basement floor contains PEX, it had to on the wall. That wasn’t an issue though, because the supplied clamps for the neutralizer allow for either mounting orientation.

To give the mechanical room an aesthetic touch, Holmes ran all the wiring behind the board he had painted for the wall. He also suggested the use of epoxy floor coating for the space instead of tile. This saved the builder two days and roughly $6,500, as well as providing an easier surface to clean.

With the heat on and the inspection passed, Holmes took a few weeks off the job to return to Denver and handle local work. When he returned to Breckenridge, FMJ had a new list of items he needed help with.

“The ventilation system had also been installed before I arrived,” Holmes says.  “It wasn’t going to pass inspection, so the builder asked me to fix it.” 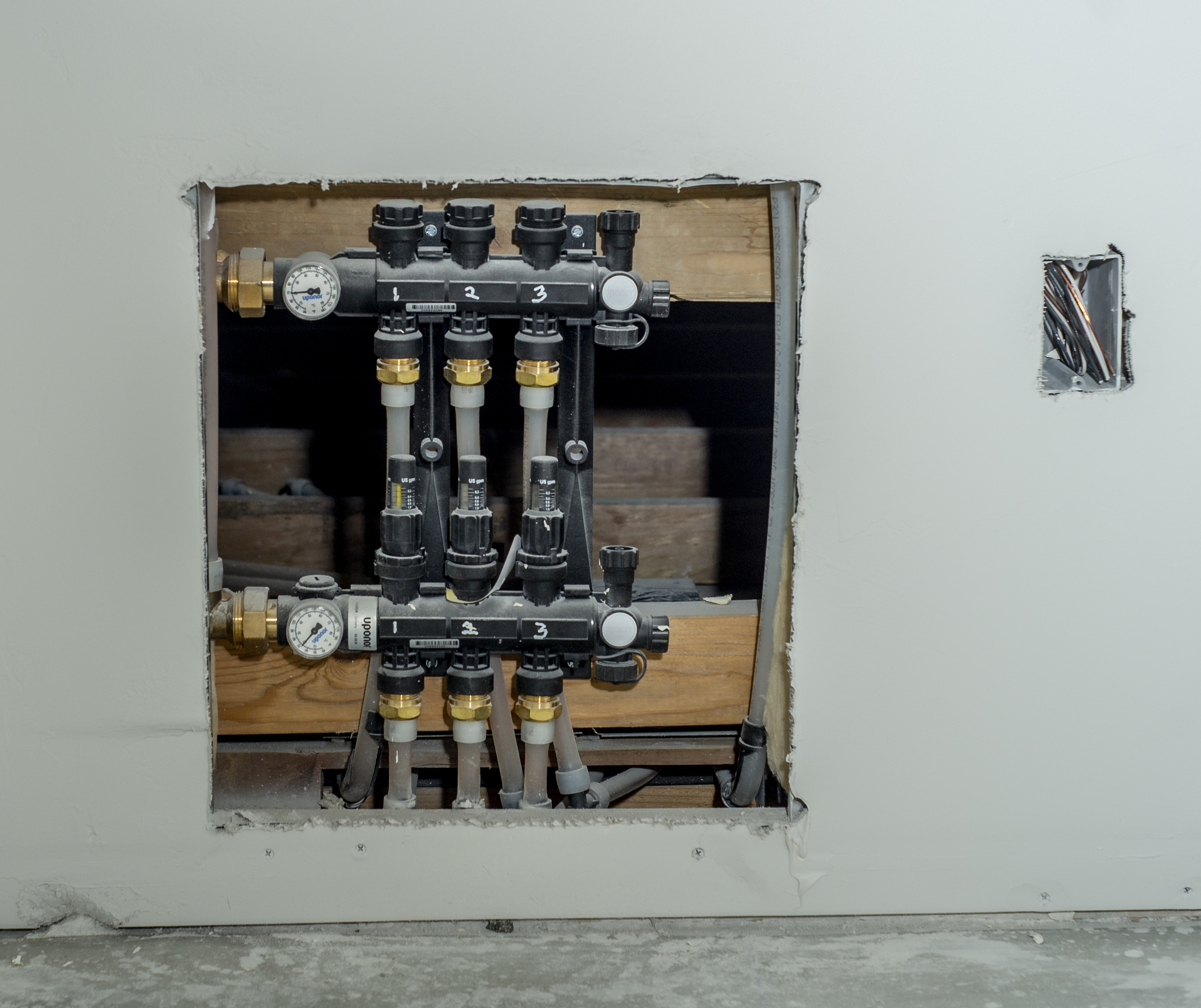 The two ERVs had been installed 15 feet off the floor in a wall cubby. The four pipes leading in and out of each ERV had been crossed, so Holmes labelled and removed them, lowering the units to a serviceable location.

Lowering the units created a new challenge; it was no longer possible to hide the ductwork. Holmes used galvanized spiral duct, leaving it exposed for an industrial look. He also relocated the ERV controls. These had been randomly mounted, but now they’re installed directly beside the main heating system thermostats; one in the master bedroom and one in the library. The t-stats are Honeywell T10 Pro Smart Thermostats, providing Wi-Fi connectivity so the owners have remote access.

Before finishing the job last November, Holmes ran gas lines from the meter to four fireplaces, two outdoor fire pits, a gas grill and the kitchen cooktop. A wine room has yet to be finished, but the zone in that space is completely installed, lacking only a thermostat.

The home was purchased for $5.3 million and was occupied last January. The buyer was also responsible for covering a $50,000 use tax, specific to buying a home in Breckenridge. Holmes is already quoting a second project for FMJ.

“Mike had exact knowledge of what we needed for this house and was prompt and efficient in delivering what he promised,” Farrell says. “We sold it knowing that it will be as comfortable, healthy and efficient as it looks.”