The extensive and rigorous testing necessary to achieve a listing — characterization tests, fluid performance tests and exposure-to-fire tests — had to prove three things:

1. The antifreeze will not substantially contribute to the heat release rate of a fire;

2. The antifreeze will not contribute to damaging corrosion in metallic systems; and

3. At what minimum temperature the antifreeze will work effectively and safely.

Because a listed antifreeze didn’t exist until 2018, code officials made concessions or contractors resorted to other freeze protection methods. But these regulations for new systems are now widely enforced.

Also, Sept. 30, 2022, is the date when building owners with existing systems still using unlisted glycerin and propylene glycol antifreeze must replace it with a listed antifreeze or retrofit with a different freeze protection method. This likely means making a decision soon, ahead of their next annual visit by a qualified inspection, testing and maintenance service.

Now, when sprinkler pipe cannot reliably remain at 40 F (4 C) ambient temperature or higher, new and existing fire sprinkler systems for residential, light hazard, ordinary hazard and storage applications can be safely designed to use UL-listed, factory premixed antifreeze. Flow rates, pipe sizing, sprinkler spacing, hanging methods and system design must be in accordance with NFPA 13, 13R and 13D. Use in galvanized piping is by the specific listing and should be verified. 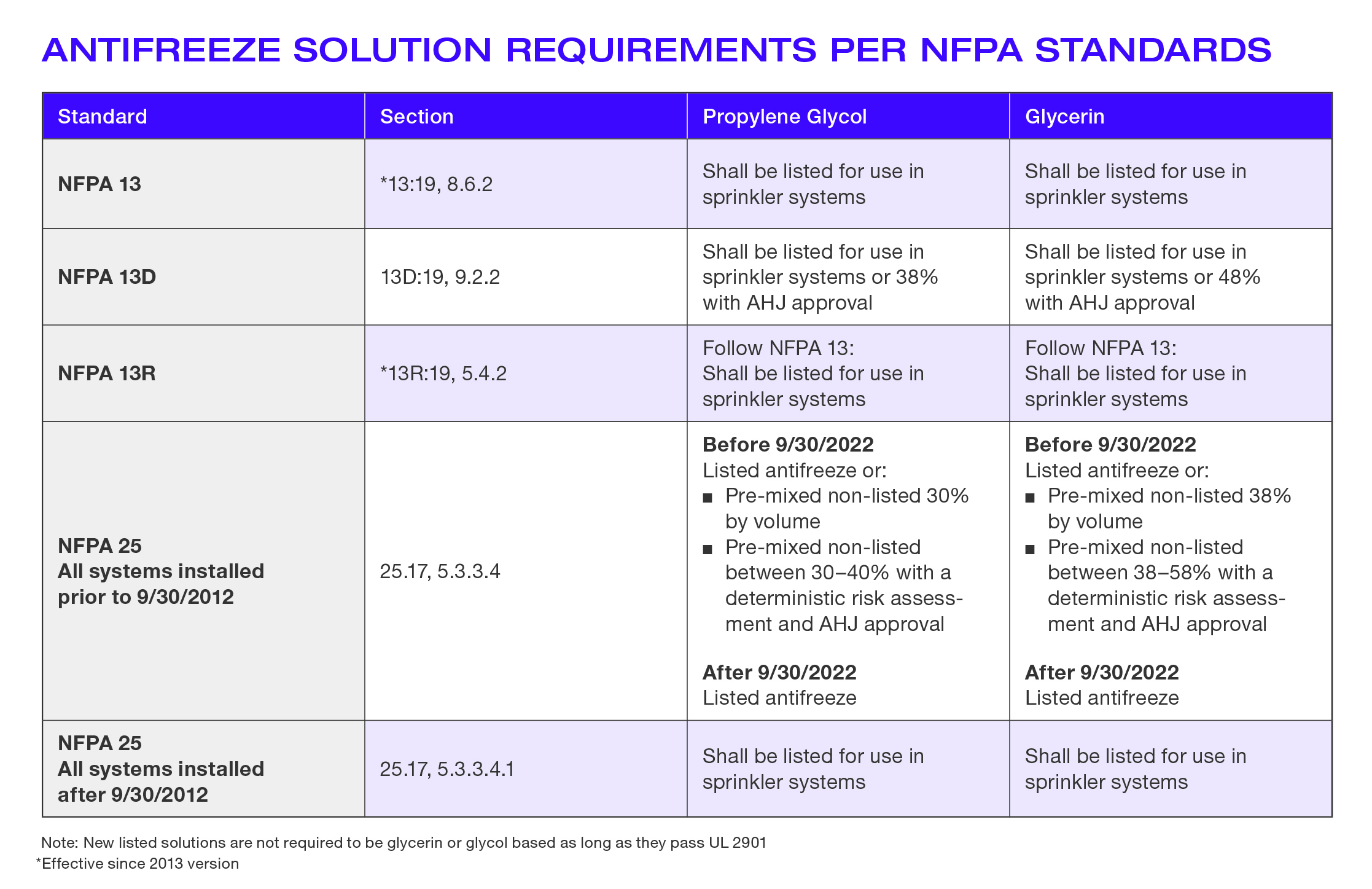 A critical element of UL-listed antifreeze solutions is that they will not ignite when discharged from a sprinkler. Sprinklers have a misting effect, which naturally helps them extinguish fires, but if the wrong fluid is discharged, a flash fire or explosion also is possible.

There were five documented cases from 1997 to 2010 where it was concluded that the antifreeze in the fire sprinkler system intensified the blazes and caused an explosion, resulting in fatal and other occupant injuries.

These tragedies and safety concerns led NFPA to ban unlisted field-mixed glycerin and propylene glycol antifreeze in new 13 and 13R systems and phase out the use of both in existing systems. NFPA 13D occupancies were grandfathered in at specific values and only in premixed solutions.

The annual costs of staying on top of corrosion in dry nitrogen systems and systems with specially coated steel pipe, as well as heat trace methods, can be prohibitive. With antifreeze now regulated, it is possible to effectively reduce pipe corrosion by up to 65 percent in certain instances with the right UL-listed antifreeze.

UL 2901 established product testing protocols to be met or exceeded to ensure that corrosion rates in metal-based sprinkler systems will be significantly reduced. At a minimum, approved premixed antifreeze solutions must not cause the corrosion to exceed 1.0 mils/year (0.025 mm/year) for ASTM A108, Grade 1010 steel; ASTM B16, H02 (Half Hard) brass; or Type 304 stainless steel, among other metallic materials that might be used in sprinkler applications with antifreeze.

Because corrosion resistance is a key determinant of whether a sprinkler system will reliably function as it is designed to do, manufacturers were free to go above and beyond these standards to push the envelope on corrosion protection, such as in the area of microbiologically influenced corrosion. 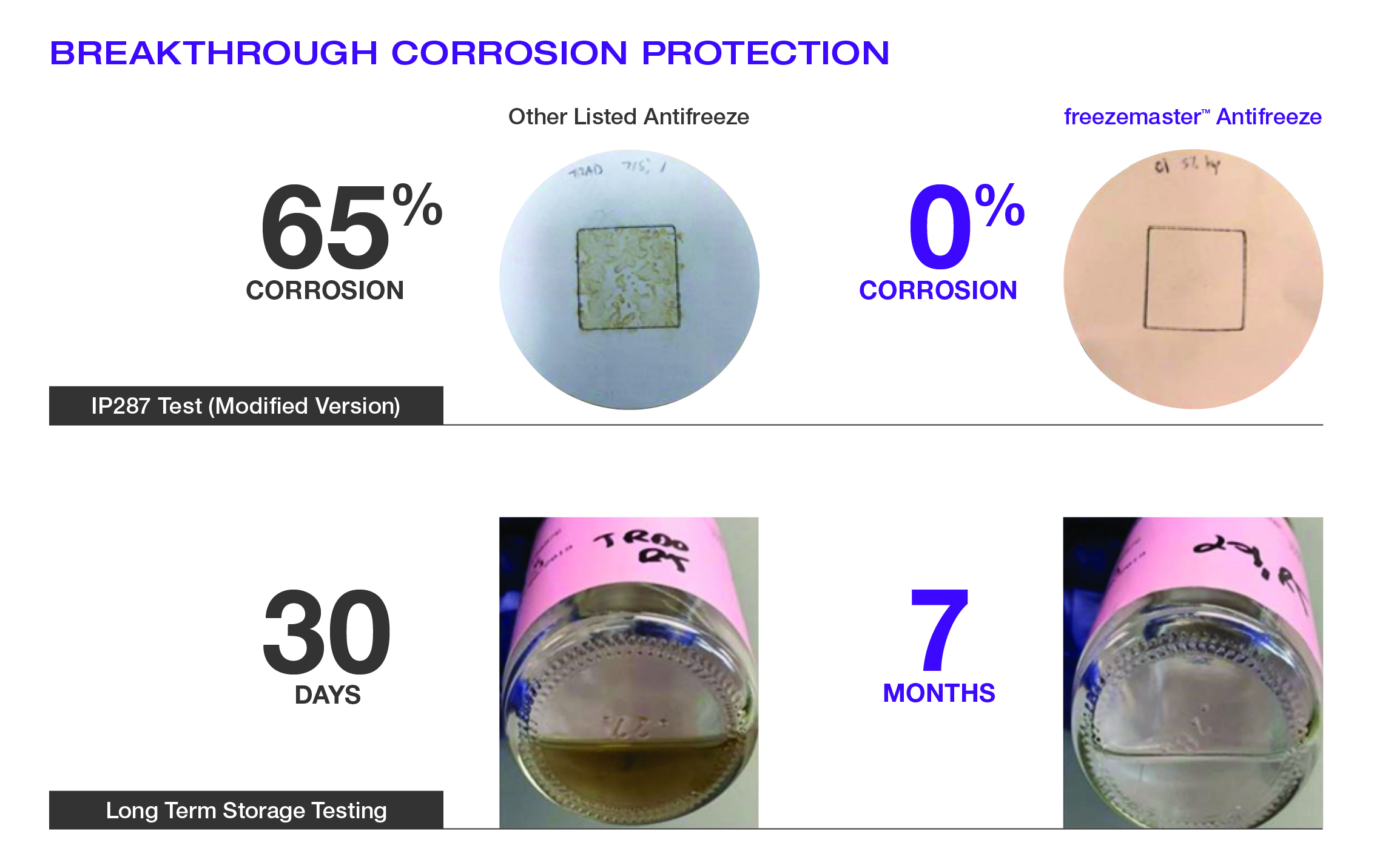 A listed antifreeze has proven it will remain in a protective liquid state down to the specific minimum use temperature displayed on its container. This assures that it will not freeze and cause severe damage, leaks or pressure drops, which can lead to system failure and costly repairs.

The minimum use temperature for the purposes of this discussion is the lowest usable temperature as provided by UL, specifically “the freeze point plus the test reproducibility plus an additional 1 F safety factor.”

In all regions, partially conditioned spaces are also good candidates for a listed antifreeze. These are interior spaces with some heating that can drop below freezing if an outside door is left open or the heater can’t keep pace with the severe cold.

It is important to note that not all listed antifreeze products are identical. The ways in which they are not should be determined before designing or installing any sprinkler system to ensure suitability for the application.

For example, details on system volume limitations and compatibility with piping system materials and accessories should be gleaned by referring to an antifreeze manufacturer’s technical data sheets and installation guides. Hydraulic calculations for the use of antifreeze are outlined in NFPA 13 as design criteria for antifreeze, and these guidelines must be followed.

The Hazen-Williams and the Darcy-Weisbach equations are applicable, with the latter generally used for systems more than 40 gallons in volume.

With guidance in place to ensure an antifreeze system is designed and installed using the safest and most reliable practices in the fire protection industry, there is no reason to wait to come into compliance.