What people want from their hot water system

In our last advanced plumbing design article, we talked about where all the pressure has gone – in the pipes, fittings and fixtures – especially on higher floors. We talked about wimpy spray patterns in showerheads and the need for pressure compensating flow regulators.

In this article, we will focus on what people want from their hot water system and how long they should wait for hot water to arrive.

What do people want from their hot water system?

Having discussed this question with thousands of people over almost three decades, we have learned that people want efficient and reliable delivery of hot water. They expect their hot water systems to be safe, reliable and convenient to use, but they want two key services: instantaneous and continuous.

Not running out of hot water in the shower (continuousness) depends on having a large enough tank or a large enough burner or heating element, or some combination of both. As every plumbing designer or engineer knows, it is a challenge to optimize the water heating rate and the storage volume for building in the face of the risk that users will shower simultaneously.

Fast arrival of hot water especially at sinks is a worthy goal – our intent at the Solara multifamily complex near Schenectady is less than 10-15 seconds for a first-time draw.  Many sink uses are for hand washing and a quick rinse of a dish – particularly at the kitchen sink where fast hot water is appreciated; appreciated but not required. Draws that require hot water – showers in particular – deserve quick arrivals as well. We considered these priorities in the location of our twig manifold nodes along the recirculated trunk line.

There is some industry guidance we can consider when choosing piping designs that will satisfy tenants and minimize wasted water during delivery and wasted energy when the pipes cool down. The American Society of Plumbing Engineers (ASPE) has the clearest metrics, shown in Table 1. The color coding in this table is also used in Tables 2 and 3.

Virtually all of the consumers we have queried want hot water to arrive within five seconds. By this, they mean the water should be hot enough to shower in, or roughly 105F. A few were insistent that hot water should arrive in less than one second. However, based on their wait times of 1-2 minutes or more that they are currently used to; anything less than 15 seconds would probably be fine!

There is a small problem with these arrival time metrics. The hot water event must be longer than the arrival time for time-to-tap to matter – at least for events that really require truly hot water. It should be longer because cool water in the pipe has to get expelled to make way for the heated water. For example, if the event is 10 seconds long and the hot water arrives just as the water is turned off, no water was wasted but it wasn’t actually hot. (Water conservation is a big deal in many locales.) The temperature was somewhere in between the ambient temperature of the building and warm. While the water efficiency of the event was 100 percent, the energy efficiency was 0 percent. If the event was 20 seconds and the water arrived in 10 seconds, the energy efficiency would be 50 percent. If you waited for the hot water to arrive before actually using the hot water, the water efficiency would also be 50 percent.

What’s the takeaway? Designers must minimize the volumes of the non-recirculated manifolds, branches and twigs. Fat and/or long tubes waste energy and water, and irritate users. Working backwards from an arrival time goal, designers must then skillfully blend recirculated trunk line routing and branch-twig lengths and volumes to achieve acceptable arrival times. Great strategy if you are involved early enough in the project and the architect supports your efforts.

So, what’s an engineer to do?

As is typical, when Pete reached out to Gary to get feedback on his designs, most of the key decisions had already been made and he had relied upon pressure and arrival time performance estimates for the plumbing design. Solara’s floor plans and the location of the mechanical room had been set, and the path for the circulation loops had already been determined. So too were the locations where the branches took off from the supply portion of the loop. This meant that the lengths from the source (circulated trunk line) to the fixtures were known and the time-to-tap could be estimated. Although the plumbing contractor was skeptical, Pete and the design team chose 3/8-inch PEX twigs for each fixture and appliance instead of 1/2-inch and limited the twig length to about 30 feet. So, did they make good design choices?

Table 2 (1/2-inch PEX) and Table 3 (3/8-inch PEX) display time to tap values for hot water at several flow rates for lengths of pipe that would be typical for twigs. The time-to-tap calculations for each combination of length (in the left-most column) and flow rate were done assuming that the hot water is flowing as a plug of water through the hot water branch-twig combo. The color shading illustrates acceptable, marginal and unacceptable performance conditions (Based on Table 1).

Let’s take an example looking at a 30-foot-long hot water branch-twig. Starting with Table 2 (1/2-inch PEX), if the hot water side of the shower was flowing at 1.5 gpm, in 1/2-inch PEX, it would take 11 seconds for the hot water to arrive at the shower valve; Marginal Performance according to Table 1.

Figure 1 shows the branches and twigs for six apartments at Solara. The return for the circulation loop begins at the tee between the lower two branches. Note the short 1/2-inch connections between the manifolds and the 3/8-inch twigs. These were needed because Uponor did not have manifolds with 3/8-inch branches when Solara was built. 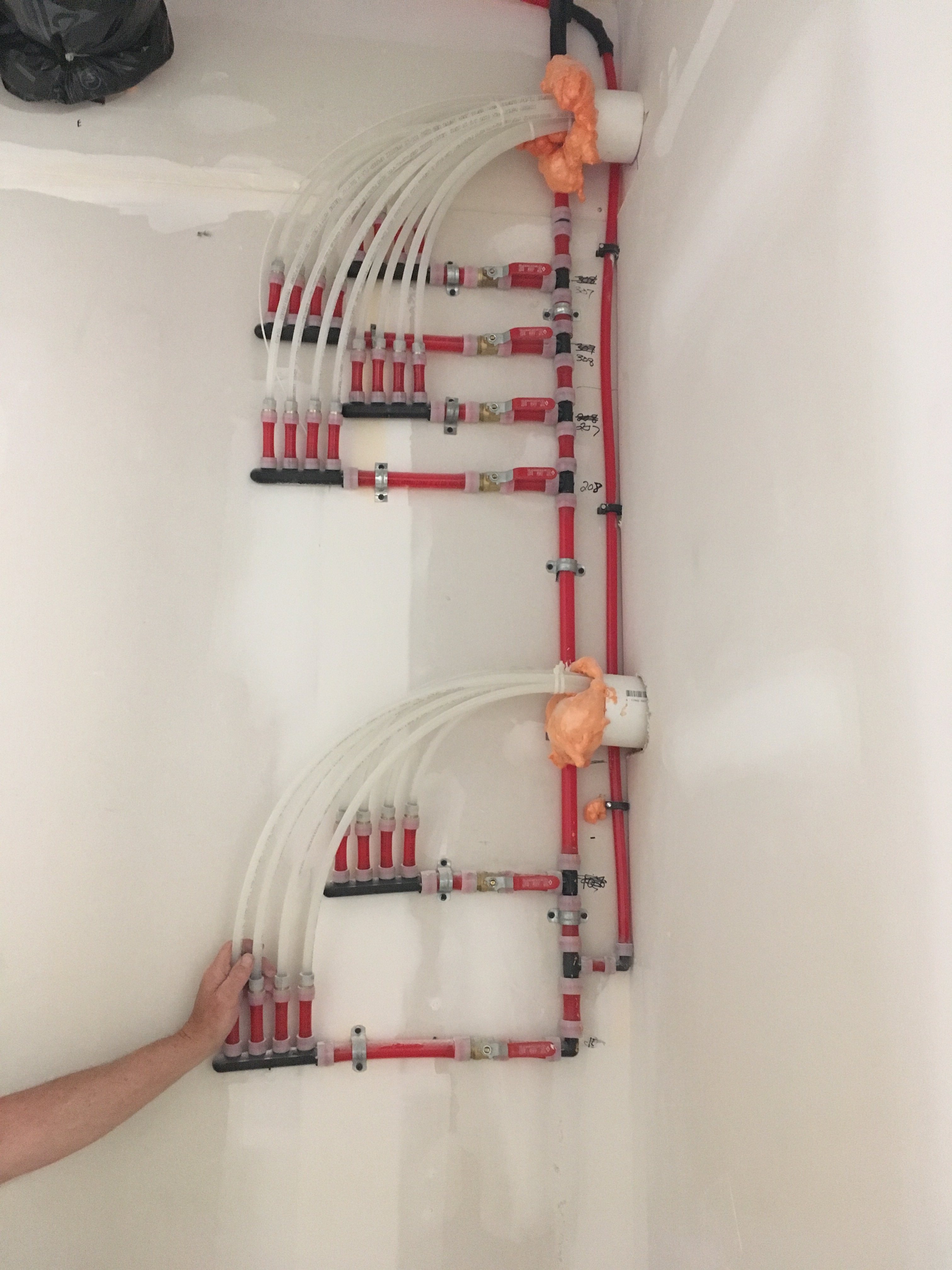 Since the distance to the fixtures was fixed and the manifolds are located at the end of very short 3/4-inch branches, the only way to reduce the time-to-tap would be to use a smaller diameter pipe for the twig. Moving to Table 3 (3/8-inch PEX), for a 30-foot length and 1.5 gpm, the hot water would take 6 seconds to arrive; Acceptable Performance according to Table 1.

Just how accurate are these time-to-tap estimates?

There is something else you need to know before completing your design. Until the pipe material and the water warm up to the desired temperature, the actual volume of water that comes out is greater than the volume in the pipe. The only question is how much greater.

Figure 2 shows three images of the simultaneous and non-linear flow regimes of hot and cold water moving through an idealized hot water branch pipe at the beginning of a hot water event. The engineering calculations shown in Tables 2 and 3 were based on the assumption that there is plug flow of hot water. Assuming that the pipe diameters and other conditions are the same, plug flow is more likely at higher flow rates. However, the research found that in most cases, since pipe diameters are relatively large and flow rates are relatively low, the flow regime looks much more like the upper image. A skinny stream of faster moving, low viscosity hot water finds its way through the much slower moving, more viscous cold water. This stream can be more than 20 feet long and can rise up to the top of an even small diameter horizontal pipe; it can tunnel through the middle or even spiral around the outside of the pipe. Definitely not plug flow!

Figure 2. Schematic of Hot-and Cold-Water Flowing in a Twig During the Arrival of Hot Water 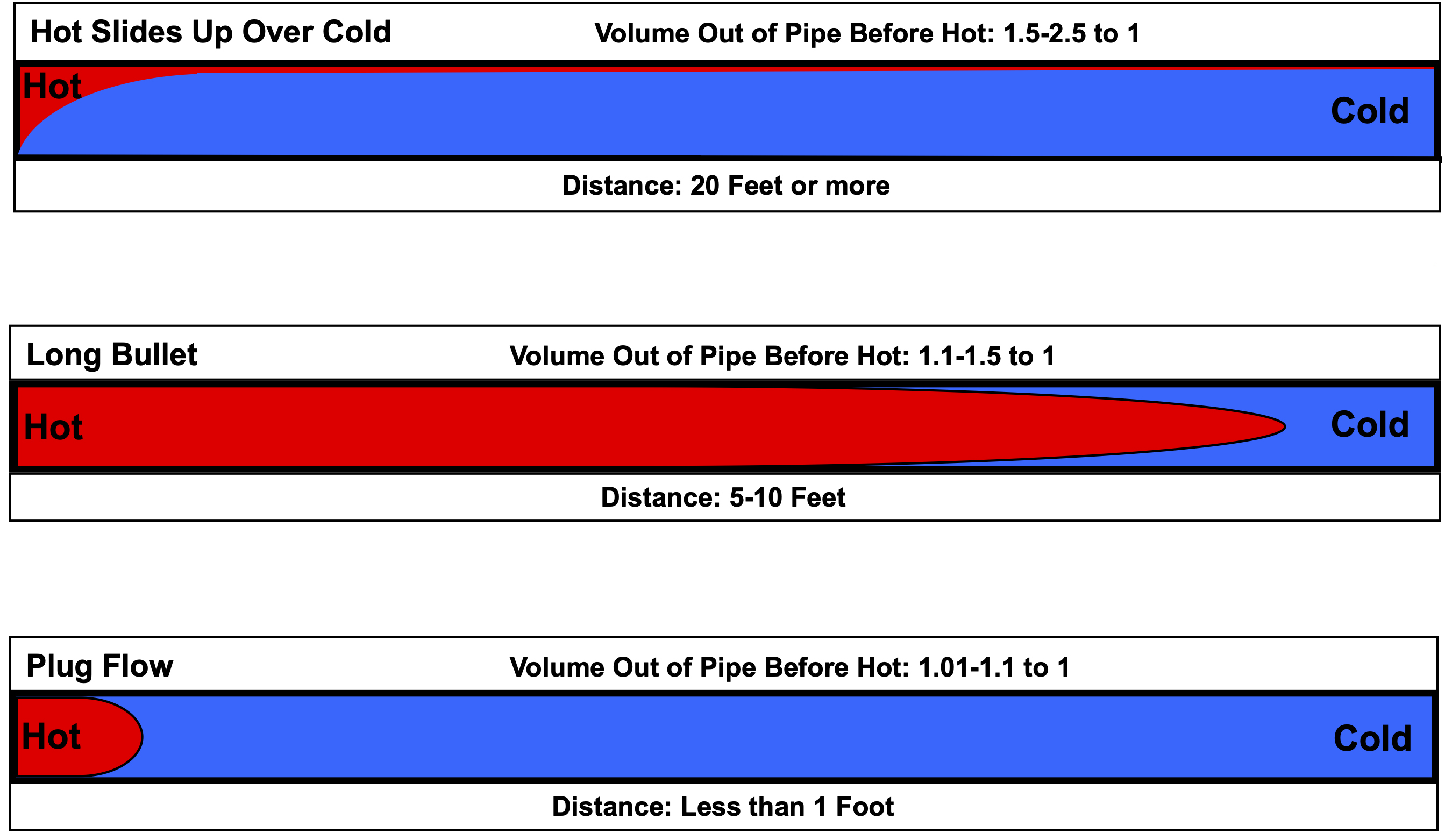 For pipes up to 3/4-inch nominal diameter, Figure 2 shows that the multiplier ranges from just over 1:1 to 2.5:1. The multiplier increases as the velocity decreases. The research also shows that the multiplier increases as the length increases. For a given flow rate, which is determined by the fixture or appliance, reducing the diameter of the twig increases the velocity resulting in less proportional waste. What is the takeaway? Use the shortest length possible and the smallest diameter possible (consistent with maintaining performance) to bring hot water to each fixture.

These tables show just how difficult it is to deliver hot water quickly. For example, at 1gpm, the volume in 1/2-inch PEX branch must be less than 20 feet long for hot water to arrive within 10 seconds. Using 3/8-inch PEX gives you the flexibility of almost twice the length for the same time-to-tap. Or for the same distance, roughly half the time-to-tap!

Flow rates for many fixtures and appliances are trending down toward 1 gpm. In fact, many are already there. Since the plumbing is likely to be in the building for decades, this strategy will future-proof the design to future reductions in flow rates. While higher flow rates result in shorter delivery times, it makes sense to design the plumbing for most residential applications at 1 gpm. No one will complain if hot water arrives more quickly.

To achieve acceptable time-to-tap performance and increase customer satisfaction, the key is to minimize the pipe volume between the source and the use, either by reducing the length or the diameter of the twig or by rerouting the hot trunk line to get closer to the fixtures, or some combination of the three.

Small diameter tubing obviously addresses wait times for hot water, but a nagging question remains. Will the pressure drop penalty that comes with using 3/8-inch PEX twigs adversely affect performance of the fixtures and appliances, particularly the showers? We’ll address that issue in a future article.