A look at how a “No Fault Forward” manufacturing philosophy helps build the company’s new Instinct Boiler.

Robust. Now there’s a word you don’t hear much in the U.S. Maybe on a bag of coffee, but that’s about it. However, robust is a word we heard often from about 10 people we met during our tour of the Ideal Boiler manufacturing plant in in the UK city of Hull, about a three-hour train ride north of London.

Robust as in “sturdy” as in “endurance” as in “strong” as in “dependable” as in “built to perform.”

How we got there was to take a look at Ideal’s “No Fault Forward” manufacturing process, and, perhaps more importantly to PHCPPros on this side of the pond, how the process helps build Triangle Tube’s new Instinct Boiler made in Hull for the American market.

“The ‘No Fault Forward’ process is a culture as well as a strategy,” says Andy Sutton, operations manager at Ideal. “It’s about having an audit without having an auditor. We’re system-driven to deliver the same level of quality irrespective of when we build and what we build. We have the consistency in our product development, in our people and in our manufacturing that protects us because the system checks itself.” 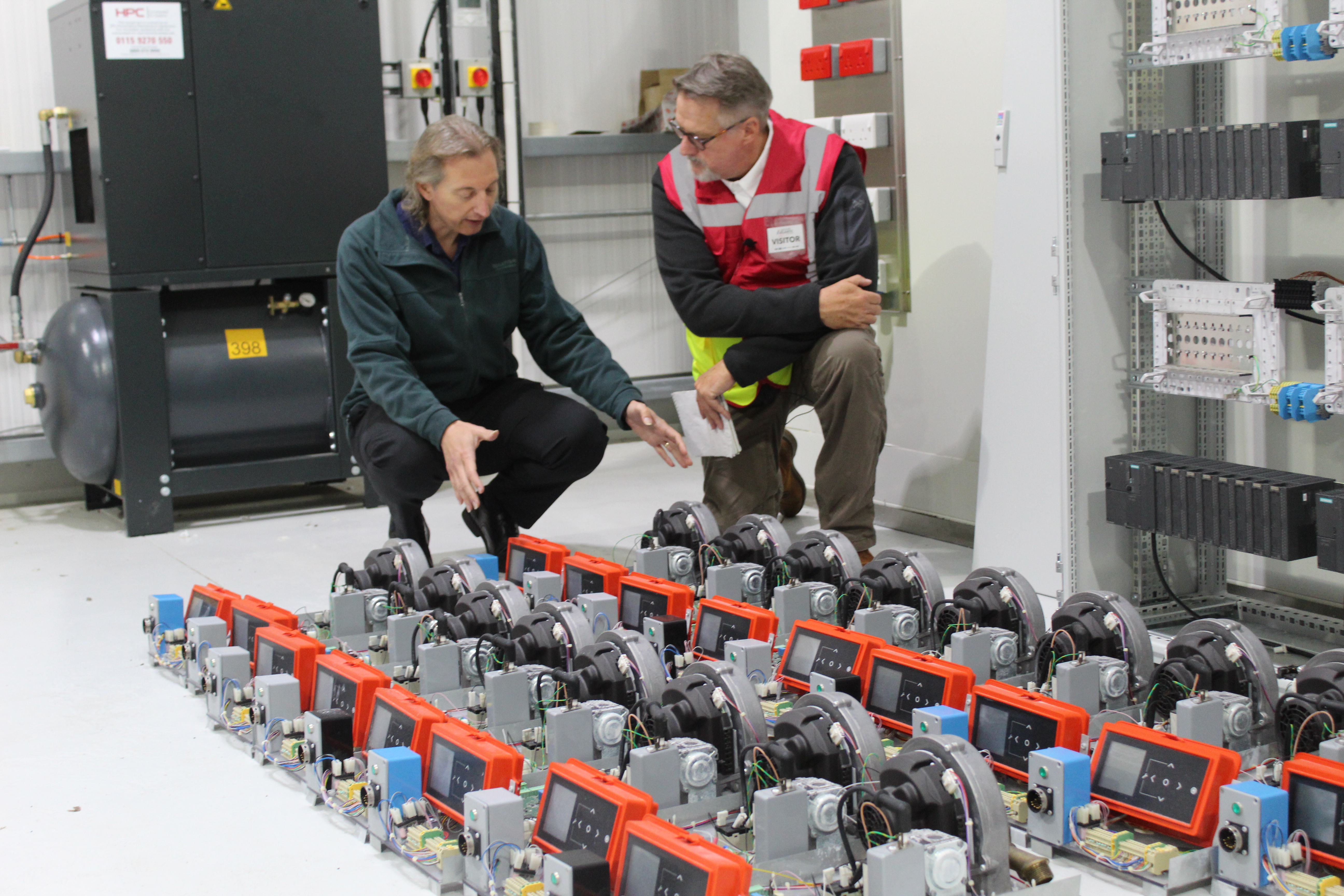 Or as he also puts it, there are no “Monday morning boilers” or “Friday afternoon boilers” at Ideal because the No Fault Forward process takes out variables that might trip up other manufacturers, which ensures that everything stays the same day in day out.

What that means for customers of Triangle Tube’s Instinct Boiler with its new stainless steel heat exchanger is a, err, robust testing of virtually every component that goes into the product, complete with some 200 checks throughout the manufacturing process.

That’s no small order considering Sutton says some 7 million individual components come through the plant every month in the production of its boilers.

It’s easy to see on the manufacturing floor how this philosophy plays out. Ideal has spent millions of pounds to perfect what it calls a “cellular process.” We hope we’ll be forgiven if we call it a “circle.” Picture operators from subassembly through functional testing and packaging in most cases wheeling components on a trolley cart around various work stations, and you won’t be too far off in understanding how Ideal builds its boilers at the Hull plant.

“What No Fault Forward means,” Katrina Cesmeli, quality team leader told us as we stopped at a subassembly area, “is that within the development phase of our products and within the industrialization of our production line, we developed the cells with the parts and the processes so that the operator can’t make a mistake.” 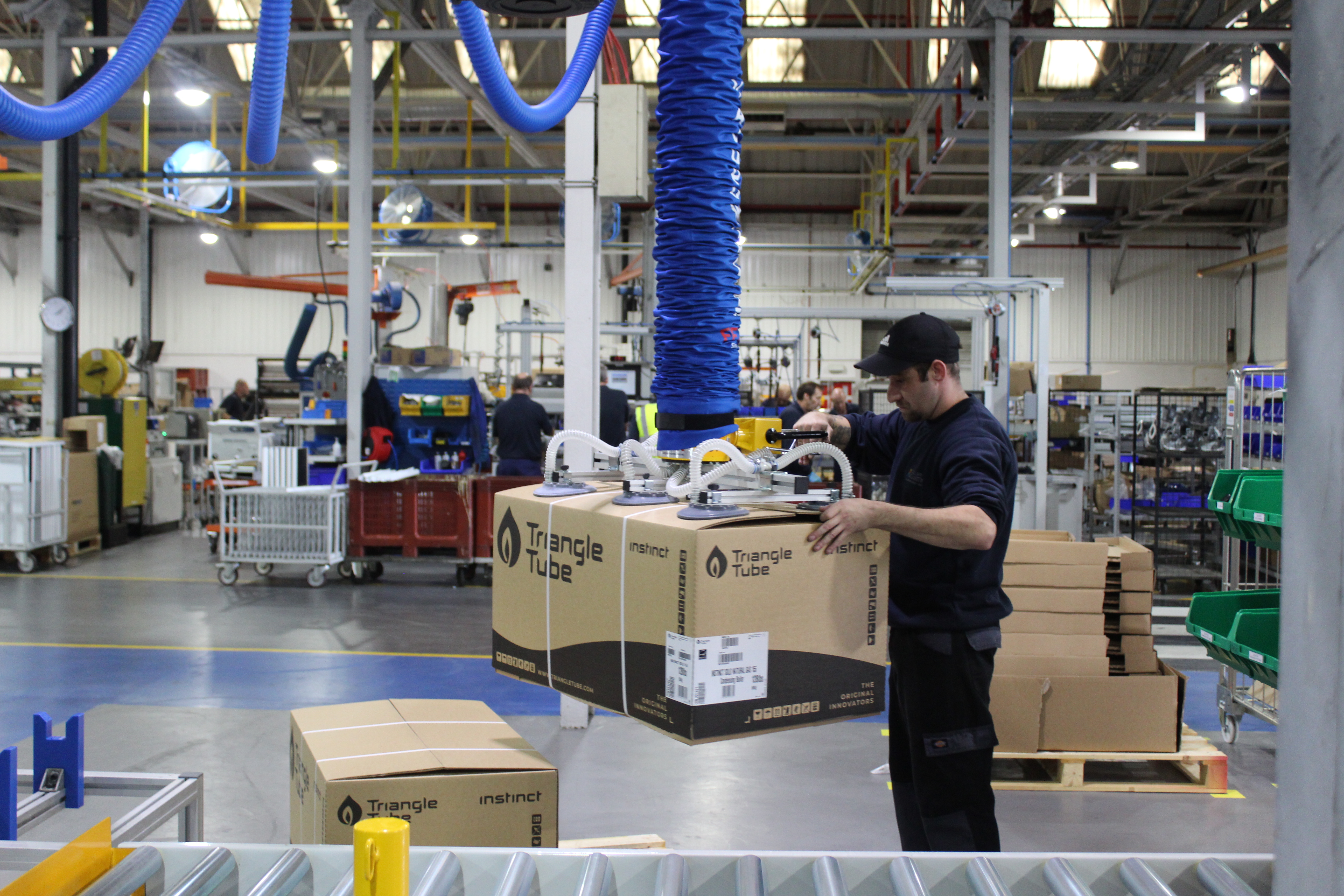 In practice that means scanning QR codes for literally every component inside the boilers to the steel case outside so that eventually a unique master bar code follows each boiler ensuring precision at all stages of production.

“The operator can’t go any further in the process without successfully completing the job that came before,” Cesmeli says, describing the various scans and camera recognition used to ensure that even the smallest connector is pushed properly onto every circuit board.

“If a mistake is made, the monitor in front of the operator goes red,” she explains. “We can’t make a mistake. The process won’t let you. That’s the beauty of it.”

Ideal continues to improve the process, too. During one of our stops, we learned that the company is integrating digital torque wrenches to ensure the traceability of correct torque values on all critical joints.

One of the more memorable parts of the process for us came at the very end of production as an operator filled up an installation pack with the instruction manuals and all the necessary accessories needed by contractors to install the Instinct Boiler. Not only are the smallest screws individually bar-coded, but the installation pack is even weighed at the end to the last milligram. Ultimately, only after all this will the system allow a data plate for the boiler to be printed.

The No Fault Forward process, however, extends well before the busy factory floor.

Before we got to see the boiler assembly, we met up with Julian Thornley, controls manager in the R&D department, as he was “stressing,” for example, a diverter valve back and forth through 727,000 cycles at that point in our tour. Thornley specializes in “environmental testing,” which to our American ears needs to be translated into meaning the conditions the boiler will be installed in.

Besides torturing diverter valves, Thornley and his staff were also putting product in a chamber that was heated to a high of 160 degrees at 95 percent humidity all while testing voltage and water quality variabilities. The boilers are subjected to this for a minimum of six weeks to replicate two years of service in the field.

If any components prove unworthy, the No Fault Forward process gives Thornley the data he needs to talk to the OEMs about making changes.

“Everything we do, we presume that someone will do something wrong,” Sutton adds. “And the systems we implement make sure that we check all that whether it is a part we buy and bring into the production process or it is something we are doing to add value to the process.”

The No Fault Forward extends all the way to the start of new product development. We started our day tour with Dr. Elaine Lancaster, chief technical officer, Groupe Atlantic – UK Division, who described the company’s “NPI” or new product introduction process.

“R&D is at the heart of it,” she says. “But it couldn’t happen without all the industrial processes going on that you’ll see, including procurement, quality, engineering and production. It’s a cross-functional affair.”

Lancaster described more about how Triangle’s Instinct Boiler became the first boiler produced for the U.S. in the Hull plant. She described how the heat exchanger was a new concept and the boiler had higher turndown ratios than used for the UK market. Later, Sutton also told us that considering the average size of American homes, the Instinct would be considered a light commercial product if it were installed for the UK market.

“Once we’ve developed the prototype and it does what we want it to do,” Lancaster says, “then we industrialize it and secure the necessary regulatory approval since validation is very important to us. Then we make sure it is reliable and the quality is excellent. Finally, we build up our stocks and launch the product.”

Our readers are bound to know Triangle Tube, in business since 1946, and which has always proudly proclaimed itself as the originator of fire tube combustion tech. But Ideal may be a new name. However, Ideal can trace its heritage back to 1872 when an American, John Pierce, opened up a tin and stove shop in Massachusetts.

That company eventually became interested in marketing its product to Europe, which ultimately bought the Ideal Boiler Co. and began using that name to produce boilers in the UK in 1905. (And if you dig a little further into the company’s history, you’ll learn that by the 1930s, it began producing plumbing products for the company that we know today as American Standard.)

Flash forward more than a century and Ideal was producing 400,000 boilers in 2018, employing 300 people, including more than 50 people in R&D. The UK represents half of the total European market for domestic wall-mounted condensing boilers, and it is the largest market for commercial wall-mounted boilers. And Ideal has been the market leader in the UK commercial boiler market for decades and has the fastest-growing market share for the UK domestic boiler market.

The manufacturer introduced its No Fault Forward process in 2008 when it launched its Logic line.

So, how did Triangle Tube end up having its Instinct Boiler made in Hull? Since 2015, Ideal has been owned by Groupe Atlantic, a French HVAC company founded by two engineers in 1968. Groupe Atlantic reported 2018 sales equal to more than $2 billion and employs 8,000 people.

Since that time, in addition to introducing the Instinct Boiler, Triangle Tube has launched a new website at www.triangletube.com. The new site includes a series of “how to” and troubleshooting videos produced with contractors in mind.

In conjunction with the launch of the website, the company also introduced its Good, Better, Best Warranty Program, offering coverage up to 6-year parts and 3-year labor with a site-accredited install for Instinct as well as its Prestige line:

In 2018, Triangle Tube also opened up its new Live Fire Training Room at its new corporate facility in West Deptford, New Jersey. The company’s Triangle Tube Academy features training on proper installation practices, system and pump sizing and troubleshooting advice. Log on to the website for upcoming dates in the New Year ahead.